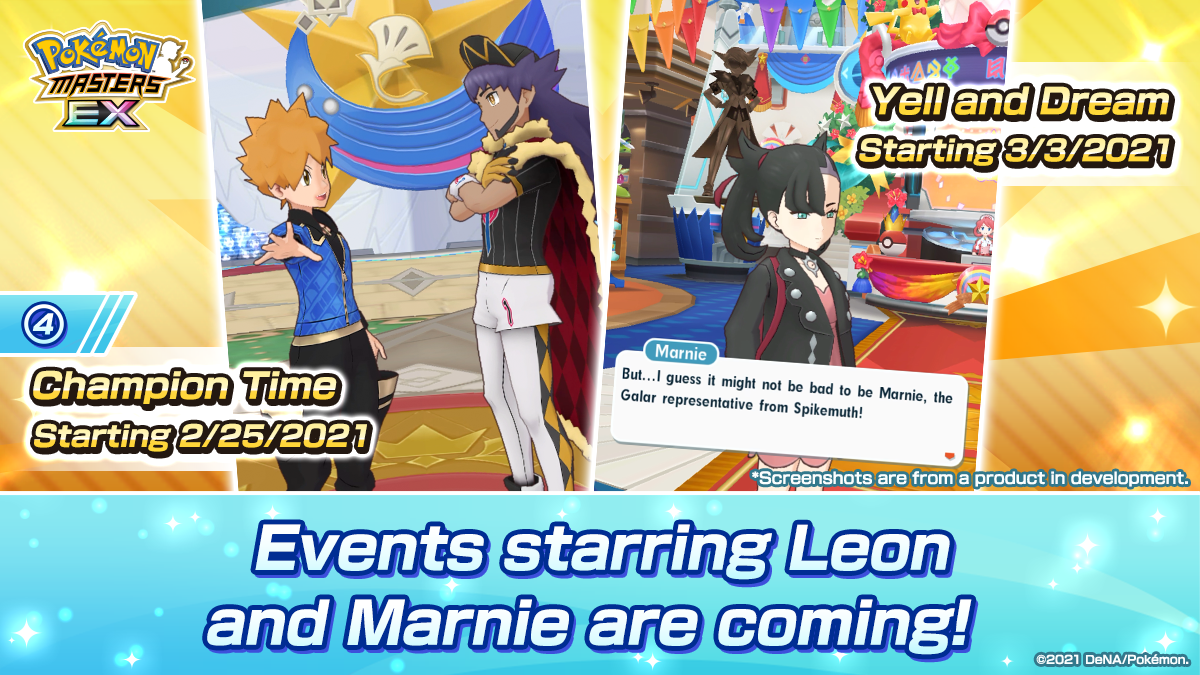 Trainers, lots of new content is coming to Pokemon Masters EX on mobile devices! A series of new updates will introduce four new sync pairs for players to collect, along with a new Story Event, and more. Here’s what you need to know.

First, Leon & Charizard and Marnie & Morpeko will be available to collect through the sync pair spotlight scout from February 25 at 10 p.m. PT until March 17 at 10:59 p.m. PT. Leon & Charizard will be the game’s first “master sync pair,” a new kind of sync pair that has a passive ability that affects the entire team when they’re used in a Pokemon battle.

Two more sync pairs -- Champion Iris & Hydreigon and Diantha & Gardevoir -- will be added to the game in March. They’ll both be available to collect through the sync pair spotlight scout.

As a reminder, the game’s sync pair spotlight scouts are like mystery boxes. That is, you won’t know which sync pair(s) you’ll receive before you spend the in-game currency, and there’s no guarantee you’ll receive the one(s) you want.

Next, players will soon be able to complete a new Story Event called “Champion Time,” which will be available from February 25 at 10 p.m. PT until March 17 at 10:59 p.m. PT. This event will star Leon, Gloria, and Marnie from the Galar region of the Pokemon universe, who will compete against trainers from other regions in exhibition matches.

Another event called “Yell and Dream” will be added to the game on March 3 at 10 p.m. PT. It will follow Marnie as she represents Spikemuth Gym on the island of Pasio. The Yell and Dream event will be available to complete until March 17 at 10:59 p.m. PT.

To celebrate the arrival of Leon & Charizard and Marnie & Morpeko in Pokemon Masters EX, developer DeNA is holding a “retweet rally” on Twitter. Ths promotion asks fans to retweet the Leon & Charizard trailer that’s been shared on the game’s official Japanese and/or English Twitter accounts between now and March 2 at 9:59 p.m. PT. If enough people retweet the trailer, all players will receive 3,000 Gems (the game’s premium currency) and enough 5Star-Guaranteed Scout Tickets to use the 5Star-Guaranteed Scout twice.

Finally, as part of the game’s “one and a half year” anniversary celebration, players can receive a variety of login bonuses for opening the game between February 25 at 10 p.m. PT and March 30 at 10:59 p.m. PT. If players collect all of these bonuses, they can earn up to 10,000 Gems.

Pokemon Masters EX is available to download for free on iOS and Android devices. Learn more about the game in our SuperParent First Look.