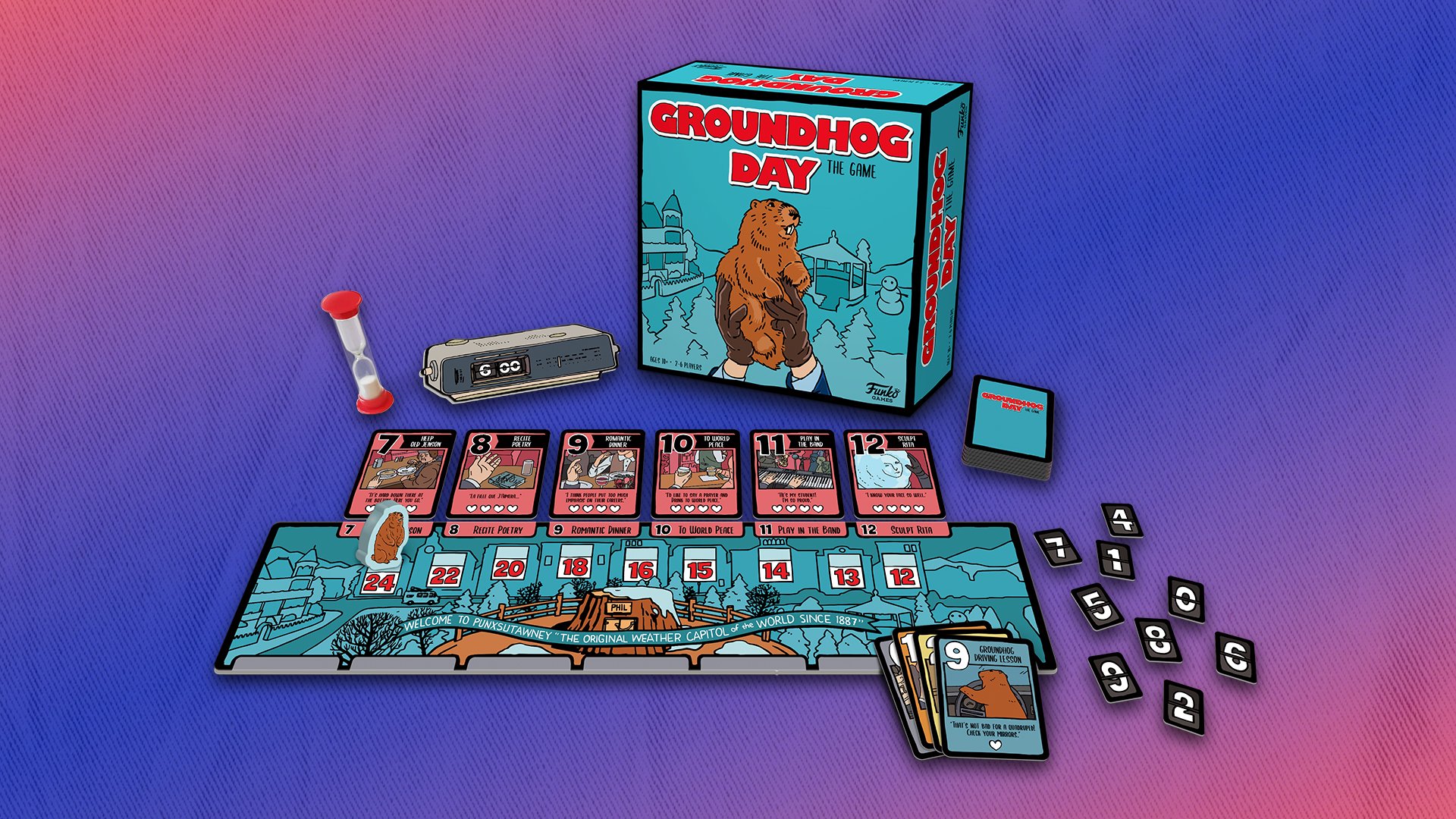 Groundhog Day has come and gone for another year, but you can still celebrate the holiday, and the Bill Murray film of the same name, in Funko Games’ Groundhog Day The Game.

Groundhog Day The Game is a cooperative card game for 2-6 players aged 10+. It’s inspired by the classic film, rather than the holiday itself. We had the chance to check it out.

This article contains references to major events in the Groundhog Day film. If you haven’t seen it, please note there will be spoilers.

What’s Groundhog Day The Game about?

Similarly, in Groundhog Day The Game, players will need to work together to help Phil Connors live a perfect day so he can escape the time loop.

Groundhog Day The Game doesn’t contain very many components, but the gameplay is surprisingly complex. You’ll have up to nine rounds (representing days) to get Phil to the perfect day, and while the game is cooperative, it has a unique twist: You can’t talk to your teammates during a round (only before and after).

Before you begin, you’ll need to place six cards representing “perfect” events above the game board. These reference special events from the film, such as Phil reciting poetry for Rita, Phil carving Rita’s face in the snow, and Phil playing the keyboard in the band, among others. These cards are off limits until you unlock them through normal gameplay.

Six other perfect event cards are found in the deck alongside dozens of cards referencing many memorable moments from the film, like Phil taking the bag of money from the armored car, Phil stepping into the puddle when he leaves the sidewalk, and Phil driving on the train tracks, as just a few examples.

Each card has a number from 1-12 in the top-left corner, and some have hearts at the bottom that make them worth an equal number of points (cards without hearts are worth nothing). Finally, some cards have an “unlock” condition. Once played, these unlock one of the “perfect” cards above the board and add it to the deck.

On each round, you’ll deal a specific number of cards to each player (this decreases each round). Players will then have one minute to place seven cards under the game board to create a timeline of events for Phil’s day. These cards must be played in ascending, but not necessarily sequential order, starting with the lowest number in the top-left corner of the cards, and working up from there. Everyone can play their cards at the same time (rather than having a set turn order), but no one can play two cards in a row. Again, no one is allowed to talk while the seven cards are being played.

At the end of the round (once you’ve played seven cards), you’ll count the number of hearts on the day’s seven cards to determine the “score” for that day. If anyone played a card with an unlock condition, the associated perfect card is then added to the deck so it has the chance to be used in future rounds.

It’s technically possible to lose Groundhog Day The Game after every in-game day, and there are multiple ways this can happen.

Specifically, if players fail to play seven cards before the one-minute timer runs down, they lose. If they play six perfect cards on one day (rather than seven), they lose. (This is due to simple math - there are 12 perfect cards in the game, and you need to play seven on the same day to win the game. If you play six on one day, there aren’t seven left to play on a future day, so there’s no way to win.) Finally, if the score for the current day is lower than the score for the previous day, it’s game over.

These lose conditions make the game pretty difficult to win, but this seems to be a deliberate part of the game’s design. That is, it’s more about “practice makes perfect” than instant victory.

You’re also hindered by the inability to talk to your teammates while playing cards, so you may inadvertently force someone to play high score cards because they can’t play anything else. If you start the game with a high scoring day, you’re almost guaranteed to lose, since it will be difficult to increase your score every round.

We’re torn on how to answer this question. Obviously, players who enjoy the Groundhog Day film (raises hand) will get more out of this experience than someone who has never seen it, since the game is built around references to the movie, with quotes and cartoon pictures on the cards. And it is fun to read the quotes and remember the scenes that make the film so great (again, we’re big fans).

But if we push the Groundhog Day theme to the side and just consider the general gameplay mechanics, we’re left with a purposefully difficult game that isn’t going to appeal to everyone. There’s definitely a feeling of satisfaction possible when the group comes together to successfully beat the game, but you’ll need the patience to (likely) start over from scratch multiple times until everything falls into place just so.

Is this game appropriate for kids?

While Groundhog Day The Game is rated 10+, it’s not really kid-friendly, since the film is aimed at an adult audience (though of course it is possible that some kids like the film!).

That being said, you can implement house rules to make the game more enjoyable for younger players. For instance, you can allow talking during the game’s rounds so that it’s easier to determine which cards should be played in which order. You can also eliminate the round timer so there’s no need to rush to play cards.

While the film contains some sexual content, these scenes are not included or referenced in the game. Phil’s many suicide attempts are also not included, though there are references to Phil “teaching” the groundhog how to drive before the first attempt.

In addition, while the game includes a sand timer, you can also download an optional mobile app on iOS and Android devices that replaces the sand timer with a digital one that plays polka music during each round (though, it’s unfortunately not the “Pennsylvania Polka” from the film).

We definitely recommend downloading the app, since it’s so easy to lose track of time when using a sand timer.

Groundhog Day The Game was created for a very particular audience: fans of the Groundhog Day film. It does a great job of referencing many of the moments we love from the movie, but the gameplay feels a bit too stacked against players.

We don’t dislike the game, but we didn’t really love the experience either. As such, it would be difficult to recommend this one to anyone who isn’t a big fan of the film.