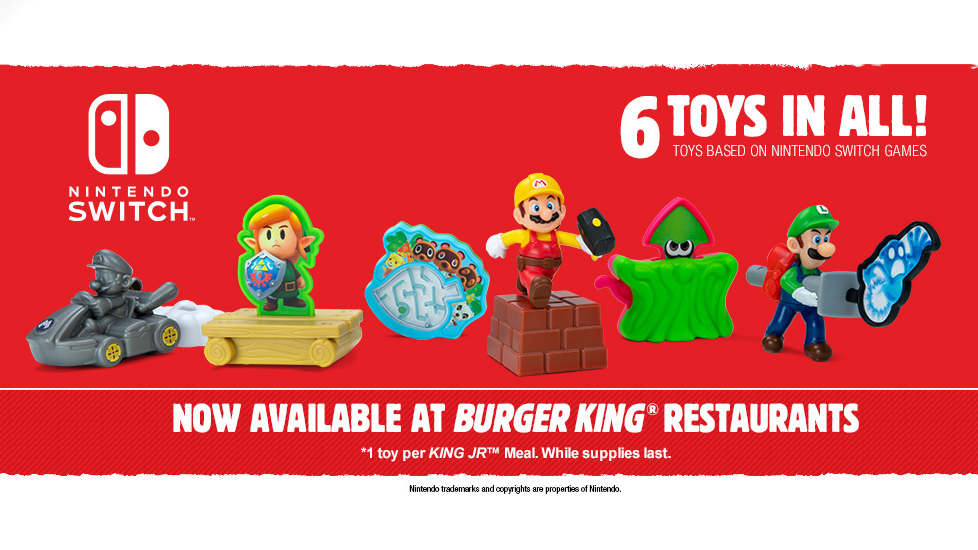 To celebrate the upcoming release of Super Mario 3D World + Bowser’s Fury on February 12, Nintendo has partnered with Burger King to give fans a chance to win a Nintendo Switch Prize Pack and collect some cool Nintendo toys.

From February 1 to March 15, Nintendo fans can purchase a King Jr Meal at participating Burger King locations in the U.S., Canada, and portions of Latin America to receive one of six toys inspired by Nintendo’s games. Specifically, there are toys inspired by Mario Kart 8 Deluxe, The Legend of Zelda: Link’s Awakening, Animal Crossing: New Horizons, Super Mario Maker 2, Splatoon 2, and Luigi’s Mansion 3.

In addition, Burger King will introduce a “Super Mario Meal” that contains a Whopper, small fry, and small fountain drink. When fans purchase one of these meals through the Burger King mobile app or website from February 8 to February 22, they’ll be entered for a chance to win a Nintendo Switch Prize Pack that contains a Nintendo Switch system and the Super Mario 3D World + Bowser’s Fury game.

Even if you don’t win the prize pack, you’ll still receive 100 My Nintendo Platinum Points with each purchase of a Super Mario Meal between February 8 and February 22. (For the record, you’re limited to earning 100 Platinum Points per Burger King account, per day).

These Platinum Points can be redeemed for a variety of virtual and real-world rewards on Nintendo’s website, such as virtual game guides and stickers.

In a press release, Nick Chavez, senior vice president of sales and marketing at Nintendo of America, commented on this promotion:

“Nintendo has always had a mission of delivering smiles to families, and we’re delighted to work with Burger King to deliver smiles through our partnership together. Whether families are ringing Mario’s Super Bell power-up or they simply want to ring the dinner bell in style, we hope everyone can look forward to some king-sized Nintendo fun at Burger King.”