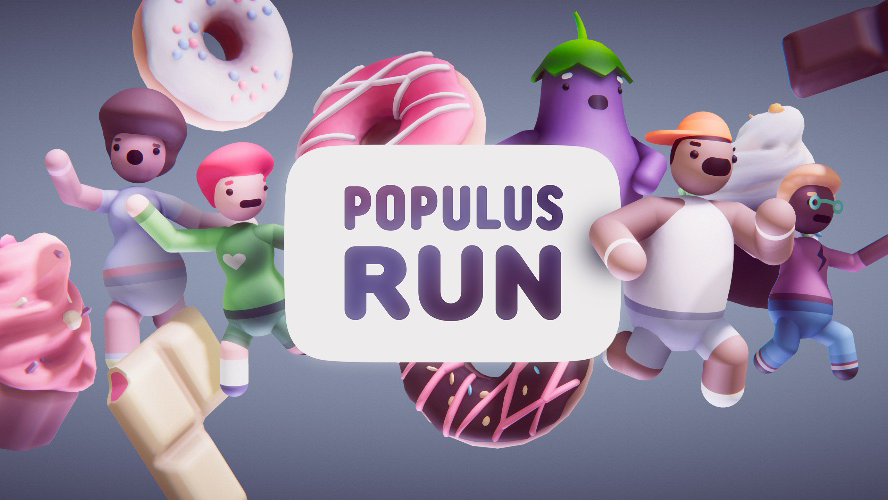 Populus Run is a level-based running game on Apple Arcade, Apple’s game subscription service. With an Apple Arcade subscription, you receive unlimited access to a curated selection of games that don’t contain in-app purchases or advertisements (learn more about Apple Arcade in our previous coverage).

In Populus Run, you’ll need to help groups of people run to the end of each stage while avoiding obstacles like giant pastries and gaps in the path. The basic gameplay resembles that of an endless runner (games like Subway Surfer), since you’ll guide your group as they run away from the screen and you can collect coins in the path. However, the gameplay here is more chaotic (and more challenging) since you’re controlling multiple people in a group.

Your group will run forward automatically, and you can tap buttons to move them left, right, or jump (the game also supports controllers). The entire group will react to your commands at the same time, so it’s like you’re controlling a single person. However, the larger the group, the wider or longer it becomes. This means that someone in the middle of the group may be safer than those on the outside, who are more likely to hit obstacles (like fences), or to simply fall off the edge of the path as you try to avoid obstacles. When someone hits an obstacle or falls into a hole, they’re eliminated from the group, giving you one less person to control.

Technically, having less people in your group makes the game easier, since you have less people to look after and it’s easier to fit through narrow areas. That being said, each level has optional objectives, and one challenges you to bring a certain number of people to the finish line in each stage. If you want to complete these optional objectives, you’ll need to keep as many people in your group as you can.

While Populus Run is a challenging game, the chaotic gameplay can be pretty funny when things go from smooth sailing to disaster in a matter of seconds (though this may also be frustrating if someone is stuck on a level).

Thankfully, the game has features to help you as you run.

For one, you can add more people to your group by running into pedestrians standing in your way. You’ll also cross checkpoints in the path that allow you to restart in the middle of a stage if you lose your entire group, rather than being required to start the level over from the beginning.

Finally, you only need one person to make it to the end of the level to successfully complete it and move on to the next stage. You can replay stages to try and complete any optional objectives you may have missed the first time around, and when you complete every objective on a stage, you’ll unlock Hardcore Mode for that level. You can also run into secret characters as you play to add them to your group, but you’ll need to successfully bring them to the end of the current stage to actually collect them.

Check out 19 minutes of Populus Run gameplay in our video below.