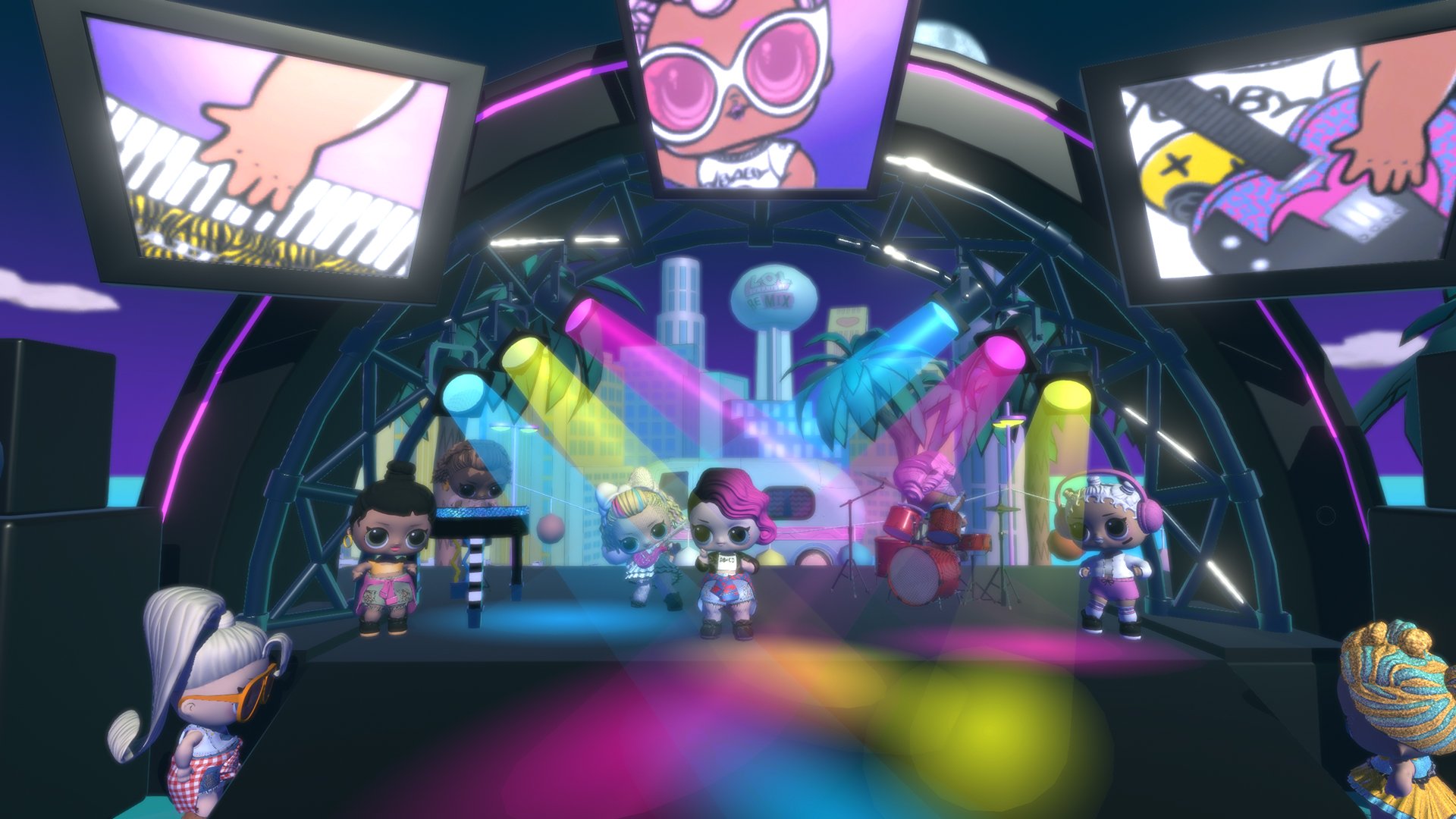 The latest line of toys and dolls in the L.O.L. Surprise franchise -- Remix -- celebrates all things music. The line includes new music-themed dolls, pets, and more for fans to collect, and there’s even an official L.O.L. Surprise music album to purchase or stream online.

As part of this new toy line, a video game inspired by the L.O.L. Surprise dolls has come to the Nintendo Switch. The game is called L.O.L. Surprise Remix: We Rule the World, and we had the chance to check it out.

L.O.L. Surprise Remix: We Rule the World is a mini-game title that allows kids to become an L.O.L. doll and visit a music festival where they can complete mini-games in order to earn items that will be used to decorate their in-game home. In addition to decorating their home, players have the ultimate goal of completing every game and quest at the music festival so that they can perform on the main stage.

Before you begin, you’ll need to decide whether to play as Rocker or create your own custom doll. If you choose to create your own character, you can customize their appearance by choosing from a selection of hairstyles, eye colors, skin tones, outfits, shoes, and accessories (like headbands and jewelry).

From there, you can play a handful of mini-games in order to earn Glitter Tokens, the game’s currency. There are only a few mini-games to choose from, and they’re all fairly simple. A dancing game, for instance, asks players to tap the correct buttons as symbols move across the screen, while a hide and seek game asks players to find dolls that are hiding around the music festival.

As you collect Glitter Tokens, you can spend them on Surprise Balls in the in-game store. These prizes start out cheap, but become progressively more expensive, requiring you to replay mini-games multiple times in order to earn the Glitter Tokens required to purchase them.

It’s worth pointing out that these Surprise Balls don’t really contain “surprises.” That is, these Surprise Balls are labeled in the store, so you’ll know exactly what they contain (like a couch or wallpaper for your kitchen, as examples) even if you don’t know what the items actually look like.

Once you purchase a Surprise Ball, you’ll need to open the game’s Surprises menu and select the Ball in order to open it. At that point, the contents (like the flooring or furniture) will automatically be placed in your in-game home. You have no control over where the item goes or in which room.

In addition to playing mini-games, you can also complete a series of quests for dolls around the music festival to earn rewards, including more Glitter Tokens and cassette tapes that you can listen to back at your house (these contain songs from the L.O.L. Surprise album). Quests may ask you to complete tasks such as going to another part of the festival to collect an item and then returning it, playing a specific mini-game, or taking a picture of a particular object using the in-game camera (which can also be used to take pictures outside of quests). Unfortunately, while the game offers a mini-map in the corner of the screen, quest locations aren’t actually marked until you discover them on your own. That is, you won’t know which dolls will offer quests until you actually talk to them.

Once a quest starts, the game will sometimes mark your next objective with a glowing cone of light that shoots into the sky, but this isn’t always the case. On the one hand, this encourages exploration, as kids need to explore the full music festival and talk to everyone in order to see and do everything. At the same time, without constant direct guidance, players may become confused about where to go or what to do next. This is especially true when players are asked to help a particular character (they’re told the character’s name), but they don’t know what the character looks like.

When you’re ready to take a break from the music festival, you can return to the game’s hub, which is where your home is located. You can walk around the rooms in your house (spread across three floors) to see the “Surprises” you’ve unlocked, and you can interact with the boombox (once you’ve unlocked it) to play any of the cassettes you’ve collected.

There’s no voice acting in L.O.L. Surprise Remix, so players will need to know how to read or play with someone alongside them who can. In addition, the game’s text is written in the “text message” style, meaning certain words are purposefully written incorrectly. As a few examples, “ur” is used in place of “your,” “thru” is used in place of “through,” and “2” is used instead of “to.” Contractions also don’t contain apostrophes. This approach fits the theme of the L.O.L. Surprise universe, but it doesn’t make the game very educational for youngsters who may be practicing their reading while playing (that is, it would teach them to spell words incorrectly).

In addition, while the graphics are definitely bright and colorful, they’re also very low quality and often blurry or pixelated (especially objects that are farther away from your character).

Finally, the game suffers from a number of technical issues. In addition to frequent lengthy loading screens, we ran into multiple glitches while playing. For instance, during one playthrough of the dancing mini-game, our character’s hairstyle had randomly changed (it went back to normal after the game was over). As another example, during the food truck game, you’re asked to deliver food to dolls around the music festival. However, once you’ve successfully delivered food to a doll (and are credited for doing so), the game will often immediately tell you you’ve delivered food to the wrong doll, which isn’t the case. (These aren’t the only bugs we’ve encountered.)

While we haven’t run into any truly game-breaking bugs or issues, the experience definitely lacks polish, and when you combine these problems with the overall repetitive gameplay, it’s hard to find things to like.

L.O.L. Surprise Remix: We Rule the World is far from perfect. The rough graphics are off-putting, and the lack of mini-game variety means you’ll need to play the existing games multiple times in order to afford all of the in-game Surprises (a process that some players may find boring).

That being said, if someone in your family is already a huge fan of the L.O.L. Surprise universe, they may enjoy the experience of collecting all of the game’s “Surprises.” We just wouldn’t be shocked if the game fails to hold their attention after that process is complete.

L.O.L. Surprise Remix: We Rule the World is now available on Switch for $39.99. The game is rated E for Everyone by the ESRB.