Funkoverse: The Nightmare Before Christmas Review 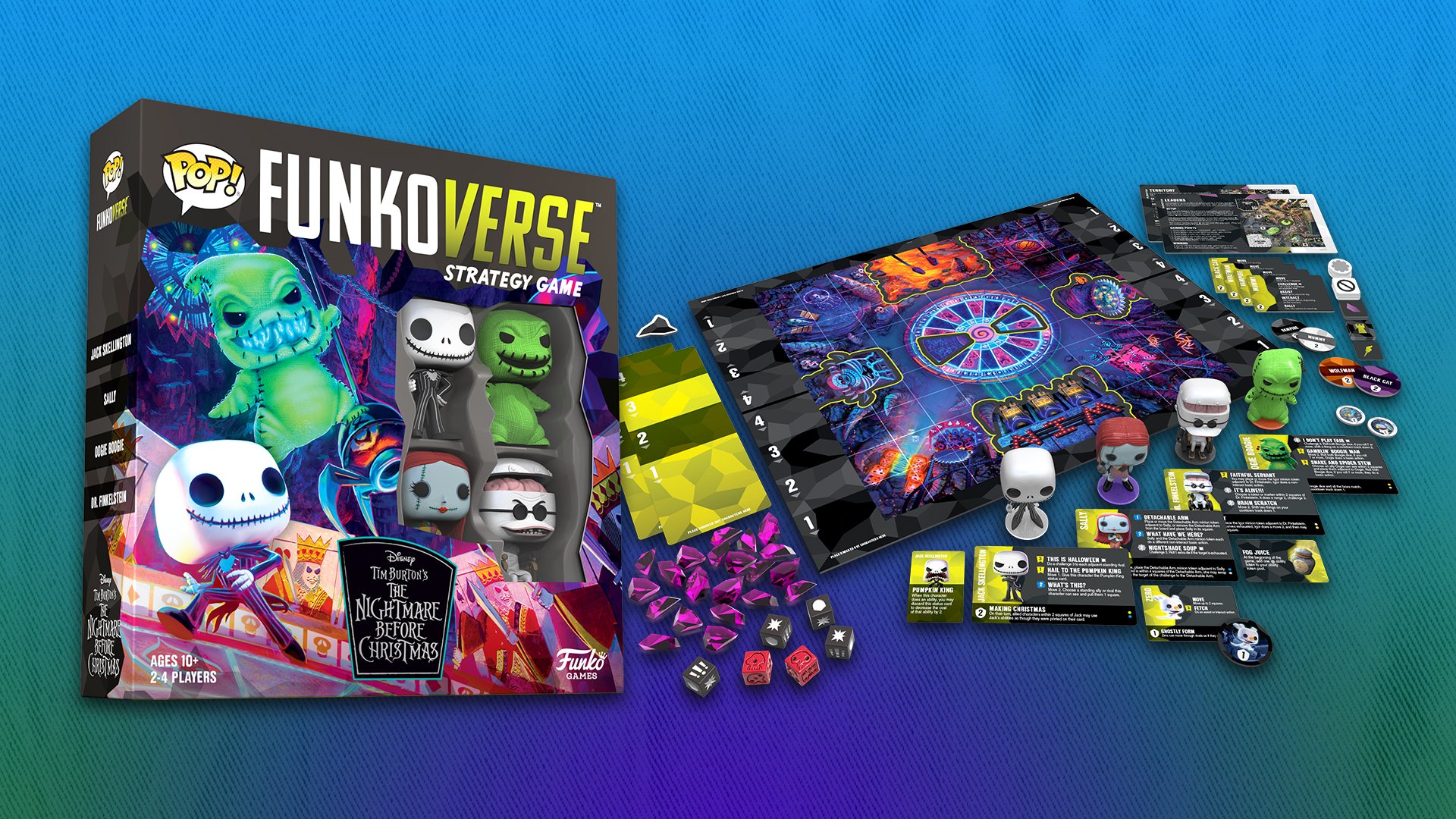 In Disney’s The Nightmare Before Christmas, the villainous Oogie Boogie kidnaps Santa Claus and Sally after Jack Skellington decides that Halloween Town needs a dose of holiday spirit. While Oogie’s ultimate goal remains a bit unclear, the ensuing rescue mission is an action-packed set piece that unfolds within his visually stimulating, casino-themed lair.

This set piece, along with a handful of others, has been re-created in cardboard and plastic for Funkoverse: The Nightmare Before Christmas. It’s a board game version of the Disney classic for 2-4 players aged 10+ that utilizes Funko Games’ ubiquitous Funkoverse character-based game system.

How is Funkoverse: The Nightmare Before Christmas played?

For the unfamiliar, the Funkoverse series casts players as characters from a wide variety of popular properties, from Harry Potter and DC Comics to Jurassic Park and even The Golden Girls. Each Funkoverse game revolves around a small handful of scenarios--four, in the case of The Nightmare Before Christmas--that sees players competing for points by completing various objectives laid out by the setup instructions.

There are four characters included in The Nightmare Before Christmas: Jack Skellington, Sally, Oogie Boogie, and Dr. Finkelstein. Each character can choose from a pool of basic actions, but they also have various special abilities that allow them to capture objectives a bit easier. For example, Jack can take on the mantle of Pumpkin King, which reduces the resource cost for his abilities, and Dr. Finkelstein can call upon his faithful assistant Igor.

The four scenarios included in the box each correspond to one of the game board’s two sides. On one side is Oogie Boogie’s lair, with Halloween Town depicted on the other. Thematically, the scenarios depict notable events from the film, such as “Making Christmas” and crowning the king of Halloween.

In practice, though, all four scenarios boil down to one thing: earning points. To do this, you’ll move around the grid-based board, interact with specific spaces, and (oddly), attack your opponents. Each scenario continues until one player has passed a predetermined point threshold.

How complex is Funkoverse: The Nightmare Before Christmas?

On the surface, the world of Funkoverse games is fairly straightforward. The objectives for each scenario are clear, and there’s a universal pool of basic actions that all characters can choose from. In practice, though, it feels surprisingly fiddly.

From my view, in an effort to make everything feel as thematic as possible, Funko has gone out of its way to make each character feel unique. The sentiment is very much appreciated, but in order to achieve the sort of asymmetry it’s aiming for, Funko has been a bit too heavy-handed with one-off rules and superfluous character tokens. Underneath this weight, the overall game experience feels bogged down by esoteric exposition.

Here’s an example of what I mean. One of Oogie Boogie’s abilities -- called “I Don’t Play Fair” -- reads thus: “Challenge 4. Roll both Boogie dice. If you roll 7 or more, shift a thing on a cooldown track down 2.”

There’s a lot to unpack here, and it all assumes familiarity with the basic rulebook and Oogie Boogie’s rules. Each turn you want to use I Don’t Play Fair, you have to recall what it means to “Challenge,” apply the number four to that rule, and then take into consideration the results of your roll of the “Boogie dice.” Then, if things go your way, the outcome is to “shift a thing on a cooldown track down 2.” I don’t want to get caught up on semantics, but the term “thing” is almost comically vague here.

All told, it’s too many layers of rules for a game aimed at families, and had us consulting the rulebook far too much in my opinion. In many cases, this slowed our momentum.

Another qualm I have is with the scenario design. The game comes with four different setups, but they all feel mechanically similar. Conceptually, it looks and feels like a robust and varied offering, but each setup is just a variation on “go to this space, interact with a token, and collect points.” This is an admittedly simplified breakdown, but I feel that there isn’t enough variety between the scenarios to claim that there are four of them.

All of this being said, if you feel up to wrangling the scattered rules, there is some fun to be found here. It’s undeniable how fun it is to control these Nightmare Before Christmas characters, and reenacting some of the movie’s scenes will doubtless bring a smile to your kiddos’ faces.

For the price of admission, you’ll also get four fun, detailed character figures sculpted in the patented large-headed Funko style. Jack, Sally, Oogie, and Finkelstein are all indisputably cute, and it’s almost a shame to put them back in the box after you finish up your game. In fact, these figures now live on a shelf in my house at the behest of my niece (7) and nephew (5), both of whom had far more fun playing with the toys than the actual game.

For this reason, it feels strange that one of the actions players can take on their turn is to attack their opponents. You get precious points for knocking out characters, which feels deeply at odds with the kind-hearted nature of The Nightmare Before Christmas. Using Jack to bop Sally square on the nose isn’t very kid-friendly, in my opinion, let alone thematic.

Unfortunately, this means that, for me, the charm of Funkoverse: The Nightmare Before Christmas is only skin deep. If you take the game for what it is (a colorful love letter to the classic film), you might find a lot to like. Dig a little deeper and think too hard about it, though, and the overall package feels forced and a bit rambling. It’s a shame, too, because The Nightmare Before Christmas is a favorite in my house. I just wish the game matched our enthusiasm.

Space Mountain: All Systems Go Hits the Tabletop This Fall