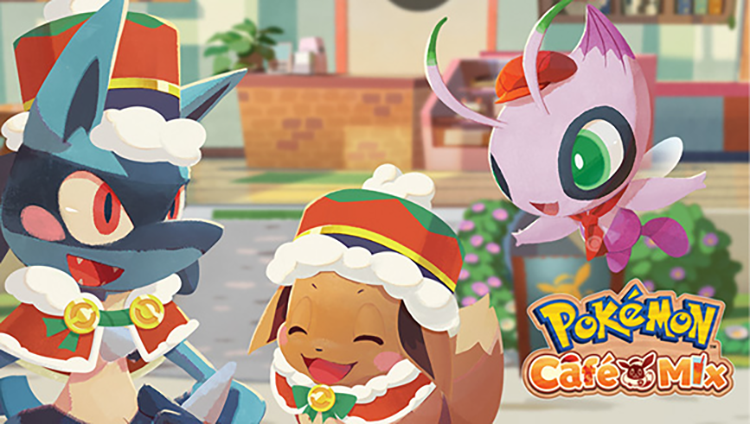 Pokemon Cafe Mix has launched its latest in-game event, which is themed after the winter holiday season. (Pokemon Cafe Mix is a free-to-play puzzle game that allows players to run their own Pokemon Cafe.)

From now until December 29 at 9:59 p.m. PT, players will be able to work together to recruit Holiday Lucario to their cafe as part of a new Team Event. During Team Events, players share progress with their in-game teammates.

During this particular event, as players complete levels, they’ll be able to raise Lucario’s overall satisfaction level. If they can reach the required satisfaction level in time, everyone on the team will receive Holiday Lucario for their cafe’s staff.

Plus, a new premium item bundle is now available to purchase in the in-game store for $10.99. It contains a holiday-themed version of Eevee, 13,400 Golden Acorns (the game’s currency), and a variety of boosters to use in the game’s levels.

In addition to this holiday-themed content, the game’s latest update will give players the chance to add Shiny Celebi to their staff for free. To collect Shiny Celebi, players need to login to Pokemon Cafe Mix on any three days between December 22 at 10 p.m. PT and January 30 at 9:59 p.m. PT. If you login on at least five different days during this period, you’ll also receive a Tasty Tart item, while returning on at least 10 different days will allow you to receive 7,000 Golden Acorns.

As the new year begins, another Team Event will also launch in Pokemon Cafe Mix. From January 12 at 10 p.m. PT until January 26 at 9:59 p.m. PT, teammates will be able to work together to add Chansey to their cafes.

Finally, Scorbunny, Grookey, and Sobble are returning to Pokemon Cafe Mix, giving players another chance to add these pocket monsters to their staff if they missed them the first time around. Each one will appear during a different time frame. Here’s the breakdown:

Pokemon Cafe Mix is available now on Switch, iOS, and Android. Learn more about the game in our SuperParent First Look.