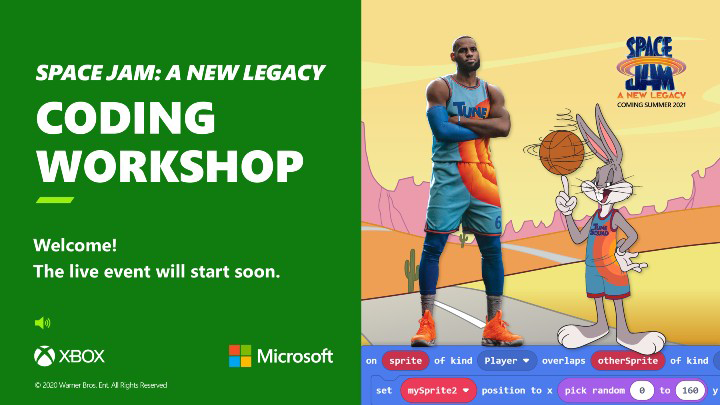 LeBron James and the Looney Tunes will hit the basketball court in Space Jam: A New Legacy in 2021. Ahead of the film’s release, Microsoft will host a series of virtual coding workshops that will teach kids about video game development and also give them the chance to create a game inspired by the movie.

A Microsoft blog post offered more information about these workshops:

“In the Microsoft Store virtual workshop, Store associates will lead participants through a 90-minute lesson plan that touches on the history of video games, the elements that make up a video game and the people who do those jobs, and how to brainstorm a video game idea using PowerPoint.

“Participants will then explore Microsoft’s MakeCode Arcade, which teaches block coding basics. The Space Jam: A New Legacy-themed tutorial will give them an opportunity to learn the mechanics of building a video game.”

According to the blog post, “Kids will learn to code a game in which a character chases a basketball around the court and every time they get it, it’s randomly placed somewhere else, with a timer that runs wherever the object is placed.”

These workshops will run from December 15 to December 30, 2020. Visit Microsoft’s website to learn more or to register your child for one of these events.

In addition to hosting its own coding workshops, Microsoft has also released resources for teachers that will allow them to complete a similar lesson inspired by Space Jam: A New Legacy in their classrooms.

Finally, while these workshops are open to kids of all ages, Microsoft has launched a contest for kids 14+ that challenges them to come up with their own idea for an “arcade-style game” inspired by Space Jam: A New Legacy. Kids can submit their game ideas for a chance to have their idea turned into an actual video game that will be released on Xbox Game Pass in June 2021.

For more information about this contest (or to enter), head over to Xbox’s website.