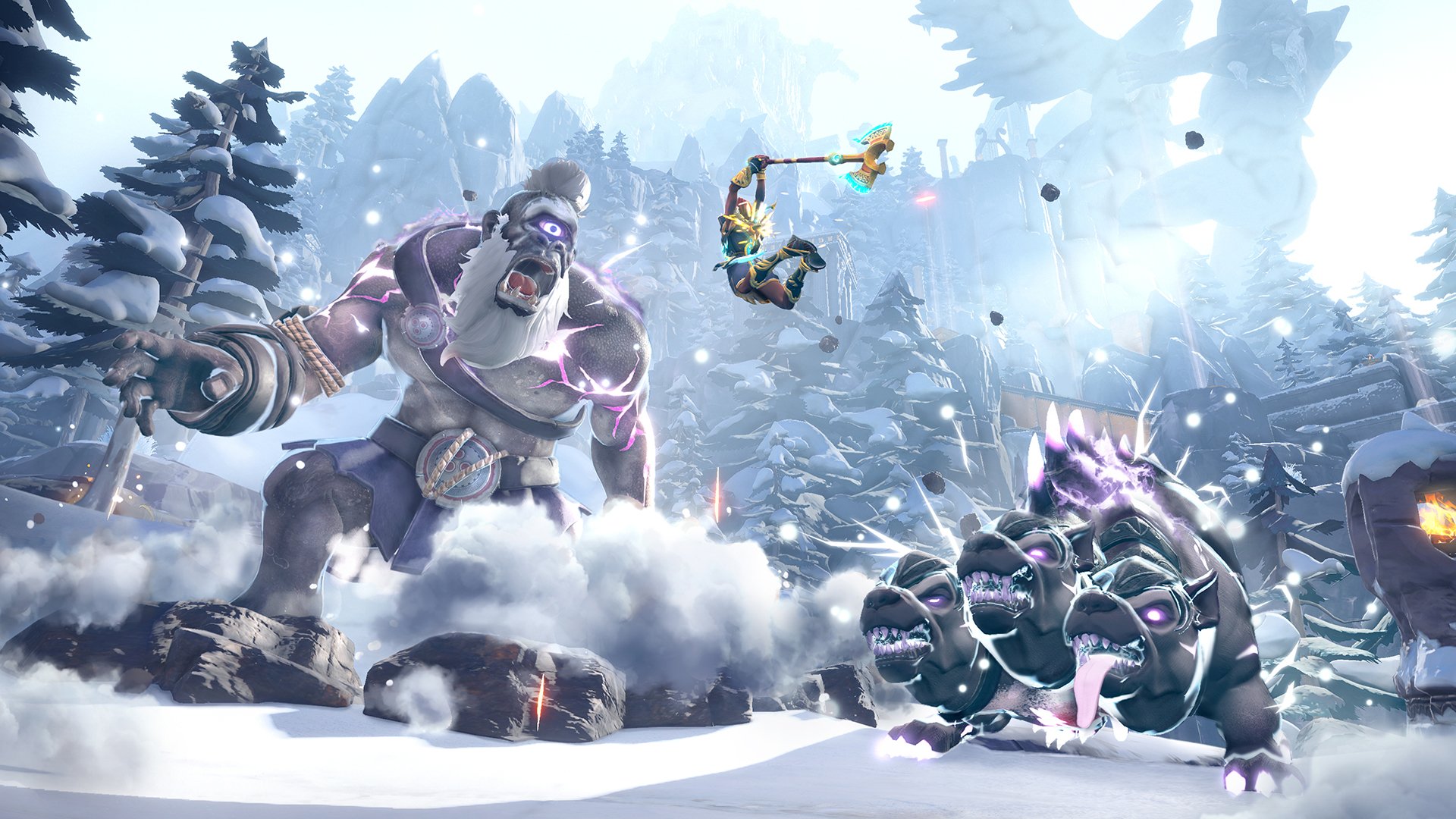 Immortals Fenyx Rising is the latest game from Ubisoft, the company behind the Assassin’s Creed and Just Dance franchises (among many others).

We had the chance to check out the Xbox Series X version of the game.

What is Immortals Fenyx Rising?

Immortals Fenyx Rising is an open-world action adventure game set in the world of Greek mythology. The term “open-world” means that players are presented with a large, open environment that they can freely explore, rather than being locked to a straight and linear path.

In Immortals Fenyx Rising, a powerful Titan called Typhon has escaped from his prison after being trapped by Zeus. He’s gone on a rampage, defeating or corrupting the gods, leaving only a handful of survivors in his wake. You’ll need to help a young shield bearer and storyteller named Fenyx (who has never been in combat) embrace the power within them in order to rescue the corrupted gods and stop Typhon from completing his quest for total domination.

Immortals Fenyx Rising has a unique setup. Prometheus, who is chained to the top of a mountain, has made a bet with his cousin Zeus (who chained him there) about whether or not a human named Fenyx will be able to defeat Typhon. The game’s storyline is presented by Prometheus, who is telling the story to Zeus as it takes place. That is, players -- as Fenyx -- will complete actions in the in-game world while Prometheus and Zeus provide voiceover narration.

Before players can actually begin, they’ll need to create their own version of Fenyx by choosing the character’s gender, appearance, and voice. From there, you’re dropped onto the Golden Isle, a truly massive world that will take many hours to fully explore.

Fenyx is inexperienced in battle (they don't even have a weapon), so you’ll spend the game’s prologue collecting powerful weapons and other gear that you’ll use throughout the rest of the game. For instance, the Wings of Daidalos allow you to jump higher than normal as well as glide across the in-game world, while Herakles’ bracers allow you to lift and move heavy objects. You’ll also be able to collect a variety of additional gear and weapons as you progress through the game, each with different perks.

As we mentioned previously, the Golden Isle is huge, and you can get around it in a number of ways. In addition to simply running on foot, you can also tame and ride mounts, glide long distances after jumping from a tall height (like the top of a statue), and even climb up the sides of mountains and buildings. Fenyx has a limited amount of stamina to use at any one time while gliding, running, and climbing, so you’ll need to take short breaks to let your stamina recharge as you navigate the world.

Once you complete the game’s prologue, you’ll be able to explore the full in-game map however you please. That is, while there are story-driven quests and a wide variety of side activities to complete (some of which focus on puzzle solving), you can complete many quests and activities in any order you choose. The game heavily encourages exploration, as many quest/activity locations and collectibles are found in out-of-the-way locations.

Fenyx has little health at the beginning of the game. You can collect items by opening chests, completing side activities, and even by simply finding them scattered around the in-game world. These can then be used to upgrade Fenyx’s health, stamina, and equipment, as well as to give Fenyx new and more powerful abilities. Since the gameplay gives you so much freedom, if you ever feel enemies are too difficult to defeat or that Fenyx is taking too much damage, you have the option to take a break from the main storyline and collect items to unlock some helpful upgrades.

In terms of combat, you’ll encounter a variety of enemies throughout your journey (including powerful bosses) that will attack Fenyx with both ranged and melee attacks. You can damage enemies with a combination of light and heavy attacks, and you can also dodge in order to protect yourself from damage.

On the game’s Normal difficulty setting, defeating some enemies can be a challenge, and you may need to heavily rely on the “dodging” mechanic to protect yourself, especially until you give Fenyx a few health upgrades.

If you’re more interested in the game’s storyline than being challenged, you can choose from two easier difficulty settings (including a “Story” setting), which make the game easier in a number of ways. Enemies become weaker, you may take less damage when falling from a tall height, and so on. Overall, there are five difficulty options to choose from, though the hardest is only unlocked after you beat the game the first time.

Immortals also includes options that can help you complete its many environmental puzzles. You can turn these options on and off at any time in the in-game menu.

For instance, the game contains many areas called “Vaults” that feature standalone puzzles that you can complete to collect items. One of the game’s puzzle assist options will provide “directional visual feedback” as you trigger events during these puzzles (this option can also help you out in other areas of the game).

We really enjoy Immortals Fenyx Rising. The story is genuinely entertaining, the in-game world is simply gorgeous, and while some of the game’s puzzles are legitimately tricky to solve, the ability to change the difficulty setting at any time (and turn on puzzle assist features) means you can create an experience that suits your own play style.

In addition to its multiple difficulty settings and puzzle assist features, Immortals includes optional colorblind filters, aiming assist options, and a menu narration feature that causes text to be narrated in the game’s menus (among other options). Overall, we really appreciate the wide selection of gameplay customization options here, as they ensure more players can enjoy the experience.

Elsewhere, the game includes optional in-game purchases, but these are only for cosmetic items. That is, the items you purchase (if you decide to) won’t actually help you beat the game.

Finally, Immortals Fenyx Rising has been rated T for Teen by the ESRB, with Content Descriptors for “Language,” “Suggestive Themes,” and “Violence.” In addition to gameplay that focuses heavily on killing, the in-game dialog occasionally contains adult language and references to more mature topics, like murder (there’s even some sexual innuendo, plus plenty of sarcasm). However, the game doesn't contain realistic blood or gore. Overall, the T rating -- that is, the game's content -- means Immortals Fenyx Rising may not be appropriate for players under the age of 13.

If your family has played The Legend of Zelda: Breath of the Wild, many of the gameplay features in Immortals Fenyx Rising may feel familiar. You’ll explore a large open world, there’s a stamina system, you can climb mountains, you’ll solve puzzles in Vaults to collect items… But these similarities aren’t bad things when the game we’re comparing Immortals to is so good.

On the contrary -- we really like Immortals Fenyx Rising. The game’s gorgeous world and interesting storyline bring ancient Greek myths and characters to life in a really entertaining way, and there’s so much to do across this massive in-game environment that it will take you quite a while to actually see and do everything the game has to offer (again, this is a good thing).

To put it simply, Immortals Fenyx Rising is a game we think both teens and adults will enjoy.

Immortals Fenyx Rising will launch on December 3 for Switch, PlayStation 5, PlayStation 4, Xbox Series X|S, Xbox One, PC, and Stadia. The game is rated T for Teen by the ESRB.