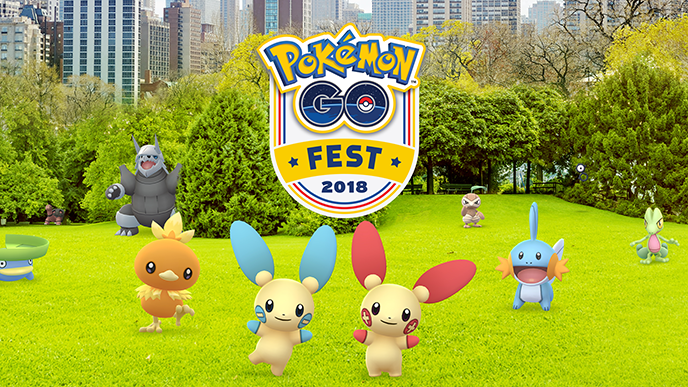 Thousands of Pokemon Go fans from around the world are converging on Chicago ahead of Pokemon Go Fest 2018, which takes place July 14-15. The second-annual event will give attendees a chance to encounter rare Pokemon more frequently, and Forbes reported the mythical Pokemon Celebi will also come to the game as part of the event.

But what if you won’t be at Pokemon Go Fest? Don’t worry -- your family can still get in on the fun by playing wherever you are this weekend.

Pokemon Go Fest takes place in Chicago’s Lincoln Park, which will be split into special “Pokemon habitats” for the duration of the event. Each habitat will allow players to encounter the Pokemon that reside there. Thankfully, Pokemon that are featured in these habitats, including Trapinch, Feebas, and others, will also appear more frequently around the world this weekend.

In addition, two adorable Cheering Pokemon, Plusle and Minun (called Cheering Pokemon because they’re designed to cheer for their partners), will appear more frequently worldwide during Pokemon Go Fest. Players will earn bonus Stardust (the game’s free currency) each time they capture one of these Pokemon. Even if you and your little ones already have these two Pokemon in your collections, make sure to tap on each one you see this weekend, as you’ll have a chance to encounter their rare Shiny forms.

Alolan Diglett and Geodude (special tropical versions from Pokemon Sun and Moon) will also begin appearing around the world this weekend.

Finally, players around the world will be encouraged to complete as many Research Tasks as possible this weekend, in order to unlock special in-game bonuses after the fact. If players complete enough Research Tasks to meet all of the required milestones, Zapdos Day will take place July 21, giving players the chance to capture the legendary bird Pokemon in Raid Battles worldwide for a limited time.

The first Pokemon Go Fest took place in Chicago in July 2017. The event suffered from major server and gameplay issues that ruined the experience for some attendees, but Pokemon Go’s developer, Niantic, said it would work on improving its events going forward. The developer has had a year to get it right, so we -- and all Pokemon fans -- certainly hope things turn out better this year.