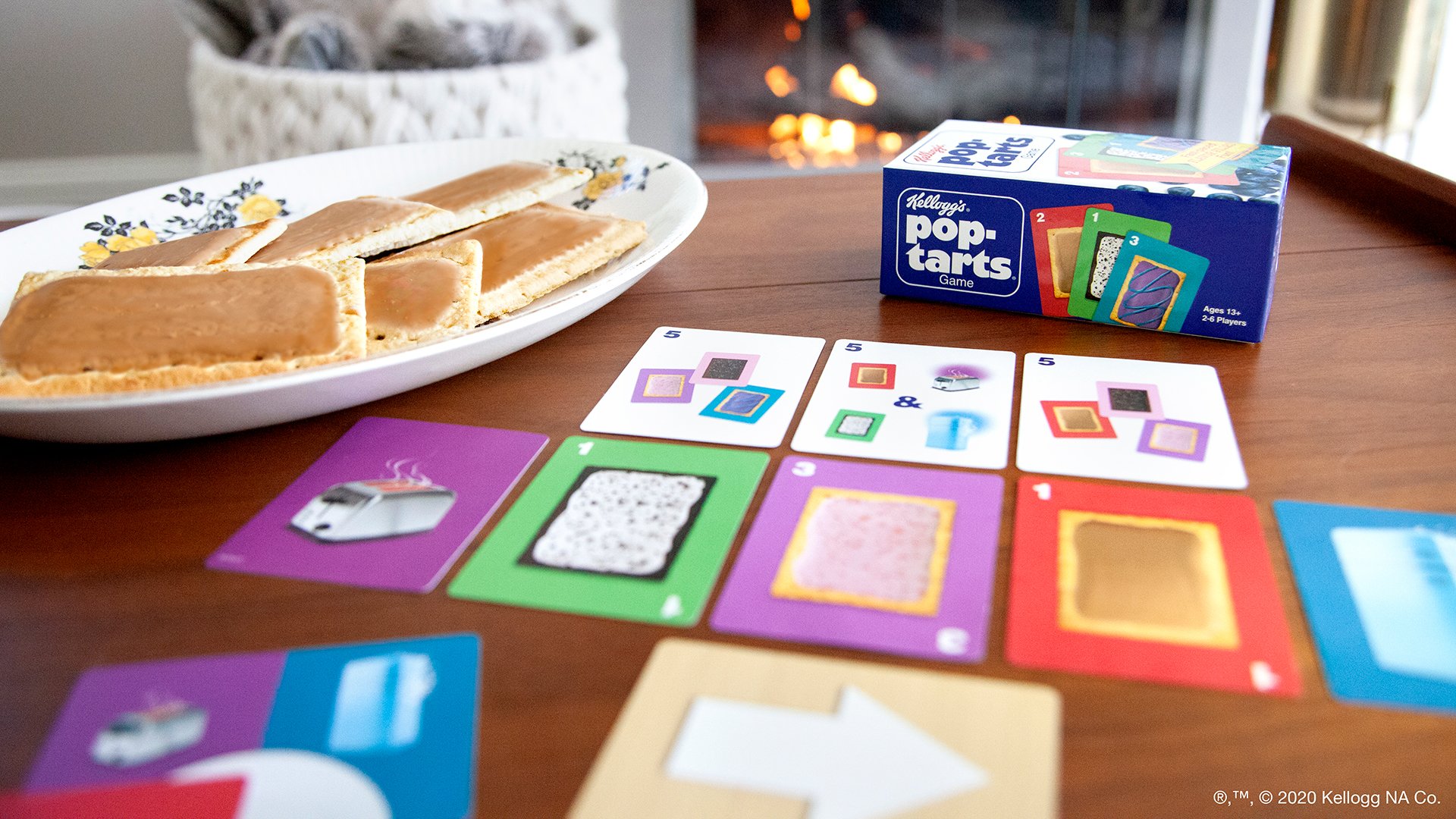 Kellogg's Pop-Tarts Game is a family-friendly card game from Funko Games, the company behind tabletop titles like The Haunted Mansion: Call of the Spirits and Pan Am, among many others.

The Pop-Tarts card game challenges players to be the first to earn 30 points by collecting and eating different flavors of Pop-Tarts pastries. The game supports 2-6 players with an age rating of 13+, but in our experience, kids much younger (we’d say as young as 8) can play this one without a problem.

Pop-Tarts has a simple premise. A line of Pop-Tart Cards are placed in the center of the table between cards representing a toaster and a freezer. Each Pop-Tart Card is worth a certain number of points, and your goal is to collect and “eat” enough of these Pop-Tart Cards to earn 30 points before anyone else.

At the beginning of the game, you’ll draw seven cards from the Pop-Tarts deck to create the starting lineup on the board. You’ll then place an Arrow Card near the center Pop-Tart Card in the line and point it toward either the toaster or the freezer. This arrow will determine which Pop-Tart Cards can be collected.

On your turn, you can play up to three Action Cards to manipulate the order of the Pop-Tarts Cards or change the arrow’s direction (though you don’t have to play any Action Cards if you’re fine with the current layout of the pastries). For instance, one Action Card may allow you to swap the locations of two Pop-Tarts Cards that are right next to each other, while another allows you to swap the locations of the Pop-Tart Cards at the ends of the line.

Since collecting a Pop-Tart Card is required on every turn, you can use strategic thinking to manipulate the line of pastries in order to pick up the right combinations of Pop-Tarts to fulfill the Bonus Card objectives (and/or to prevent your opponents from doing so first).

Once you’ve collected your Pop-Tart Card for the current turn, you can “eat” (think “score”) any of the Pop-Tart Cards you’ve collected to earn points. You can only have four Pop-Tarts Cards on your Plate Card at once. When you collect a fifth card, you’re required to eat at least one Pop-Tart to keep yourself at four. This adds to the strategy at work here, since it may be smarter to focus on only one Bonus Card objective at once (rather than all three), so that you don’t wind up “eating” a card you wanted to save for one of the objectives. Of course, that decision will be up to you.

Finally, to end your turn, you can discard unwanted Action Cards, and/or draw enough new Action Cards to bring yourself back up to three.

We really like the simplicity of this Pop-Tarts card game. It requires just enough strategic thinking to be engaging, while also being a fast-paced experience that you can finish in 15 minutes. Plus, you can make the game shorter or longer by simply changing the number of points you need to win.

That being said, we would have liked to see more variety in the game’s Action Cards. As it stands, there are only four different kinds of Action Cards, so this limits the ways you can manipulate the Pop-Tarts Cards on the table (you’ll often have duplicate cards in your hand).

The Kellogg’s Pop-Tarts Game has a clever theme, fun artwork, and is a quick and easy experience to both learn and play. With a limited variety of Action Cards, the options for strategic maneuvering aren’t as numerous as we would have liked, but the simplicity helps ensure the game can be enjoyed by even younger members of the family.

Overall, this is a nice option for families looking for a break from more complicated tabletop games.

The Pop-Tarts card game is now available for $9.99.