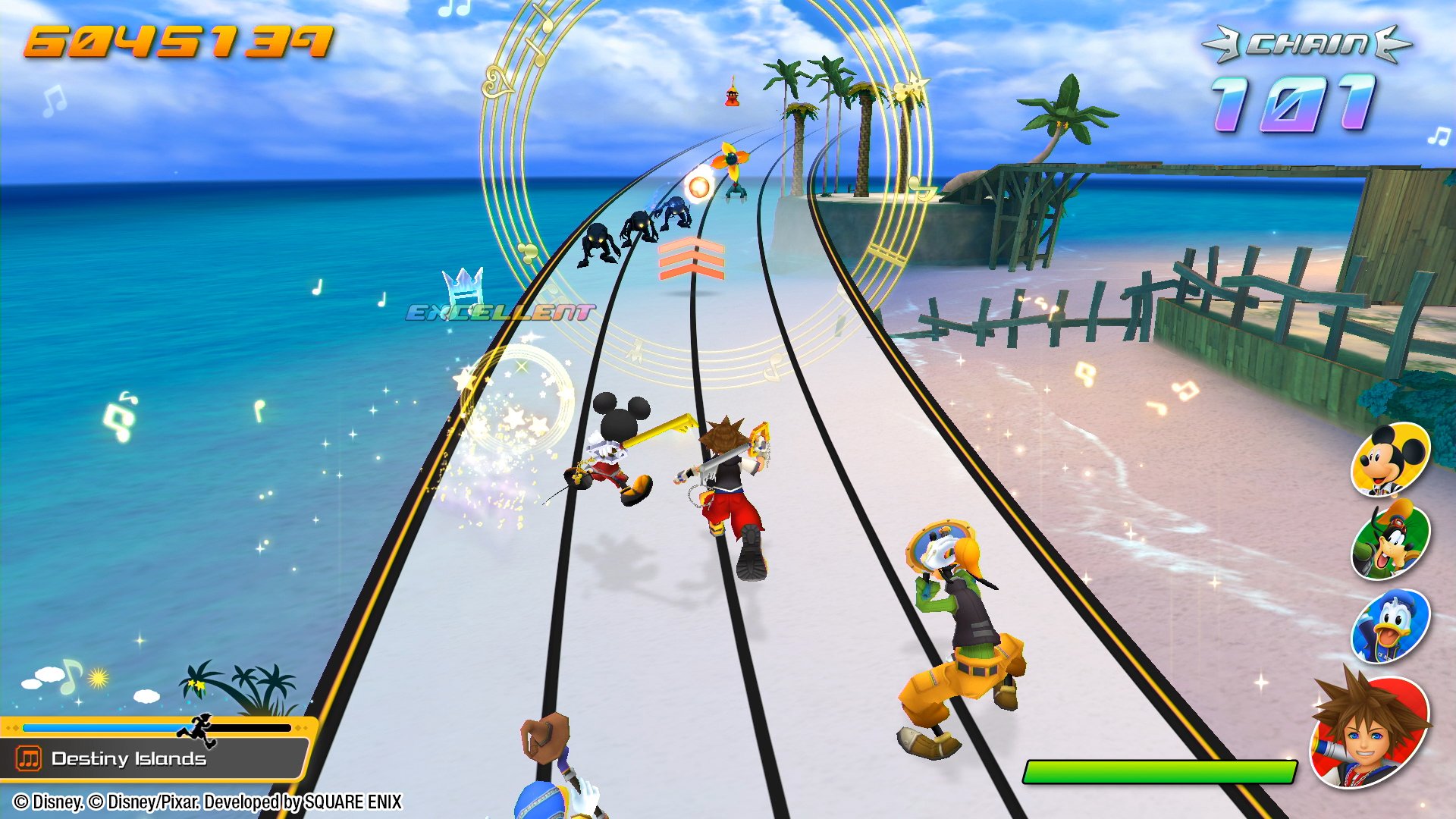 The many games in the Kingdom Hearts franchise feature wonderful, memorable music that will likely stick with players even after their time with each role-playing game (RPG) comes to an end.

Now, the latest game in the Kingdom Hearts series -- Kingdom Hearts Melody of Memory -- allows players to listen to dozens of songs from the franchise while also testing their reflexes.

We had the chance to check out Melody of Memory on PlayStation 4.

What is Kingdom Hearts Melody of Memory?

Kingdom Hearts Melody of Memory is a music rhythm game that challenges players to press the correct buttons in time with the music as symbols appear across the screen. The game features more than 140 songs taken from throughout the Kingdom Hearts franchise, and you can play through them in a variety of modes.

The main mode in Melody of Memory is called “World Tour.” It allows players to experience a new story, narrated by Kairi, that takes them through the major events of past Kingdom Hearts games, starting with the original Kingdom Hearts and then progressing in order through Chain of Memories, Kingdom Hearts II, and so on.

As the name suggests, the World Tour mode allows you to complete songs in the various worlds players have visited in previous Kingdom Hearts games. Each World has at least one song to complete, and each song has three different Mission objectives (each Mission you complete rewards you with a star, with stars being required to unlock new levels).

During each regular song in World Tour mode, your team of three characters (by default, Sora, Donald, and Goofy, but you’ll unlock more over time) will run away from the screen automatically, allowing you to focus on pressing buttons in time to the music.

Enemies, barrels, and other items will appear on the path in front of you. A symbol surrounded by a moving circle will appear over each enemy or item as you run, and you’re challenged to press the correct button when the circle moves directly over the symbol. When you press the correct button, your characters will attack the enemies, break the barrel(s), etc. and you’ll continue running. Sometimes, you’re required to press two or even three buttons at the same time as enemies or other items line up on the screen.

In addition to regular levels, the Main Story mode also comes with a few boss battles, which change things up by having symbols move horizontally, rather than vertically, across the screen. The better you perform during these boss battles, the better Sora can protect himself from the boss’s attacks.

As you complete stages, you’ll earn experience points and your characters will level up, improving their strength, defense, and more.

What are the game’s other modes?

As you complete songs in World Tour mode, you’ll unlock them for free play in the Track Selection mode, which allows you to play any unlocked song at any time. This mode also contains special song levels called "Memory Dives," which allow you to watch cutscenes from past Kingdom Hearts games as you press buttons in time to the music. In these Memory Dive stages, Sora glides through the air as you hit symbols, and there are no enemies, barrels, etc. in the path, so you can focus more on the cutscene in the background.

Level Selection mode is great for younger players or newcomers to rhythm games, since you can choose from three different Play Styles as well as the three difficulty levels.

The “Basic” play style is the normal style found throughout the rest of the game, while the “One Button” style allows you to “hit” every symbol during a song by pressing a single button. Finally, the “Performing” style is for those who want even more challenge, as it adds extra symbols to the stage that must be “hit” by pressing buttons that aren’t normally used.

You can also challenge the computer or other real players online in a VS Battles mode. In these multiplayer levels, both competitors will play through the same song, and you’ll automatically toss “tricks” at your opponent as you play. These tricks are meant to trip you up. For instance, one may add extra, unnecessary symbols to the screen to throw you off your game.

You can also play through levels together with another player on the same system in the game’s Co-op Mode. During these songs, losing all of your health will simply result in a score penalty, rather than a game over.

Finally, you’ll collect items automatically as you play, which can either be viewed in the game’s Museum (in the case of collectibles), or used for crafting. For instance, you can craft potions that will automatically heal Sora if his health drops too low during a song, you can craft items that will allow you to earn more experience points from a level, and more.

Is Melody of Memory a fun game?

While the basic rhythm gameplay is fun, players with previous experience with the Kingdom Hearts franchise will likely enjoy the game more than those without this experience, since they’ll be familiar with the music. Without this familiarity, levels may feel more difficult to complete, since players will need to learn the rhythm of each song as they go, rather than pulling it from memory.

In addition, levels in World Tour mode become much more complicated (and therefore challenging) to complete as you progress (even on the easiest difficulty setting), and there are a few design issues we’d fix.

For instance, some enemies fly through the air, while others stand on the ground. Some flying enemies require you to jump before you can attack them, while other flying enemies (even of the same species) can be attacked from the ground. This is hard to wrap your head around -- that is, it hinders your ability to plan ahead.

In addition, levels can sometimes feel overwhelming and chaotic, especially if they’re filled with jumping enemies or enemies in very close proximity to each other (the latter is more of a problem on harder difficulty settings). You really need to focus on the symbols and circles on each enemy and item, rather than the enemies themselves, which takes some getting used to.

Full disclosure: We’re huge fans of the Kingdom Hearts franchise here at SuperParent, so we went in expecting to like this game. And we do really enjoy the rhythm gameplay, even though it has a few issues we’d like to change. At the same time, the sometimes chaotic gameplay may be not enjoyed by everyone.

That being said, we appreciate the ability to customize the experience through the availability of multiple difficulty levels and the “One Button” play style in the Track Selection mode. That is, whether you’re looking for an extra challenge or for a more relaxed experience, you can find both here.

In the end, if you’re not going into Melody of Memory as an established fan of the Kingdom Hearts games, we recommend trying the game’s free demo before making a purchase, just to make sure this is an experience your family will enjoy.

Kingdom Hearts Melody of Memory will launch on Switch, PlayStation 4, and Xbox One on November 13. The game is rated E10+ for Everyone 10+ by the ESRB.