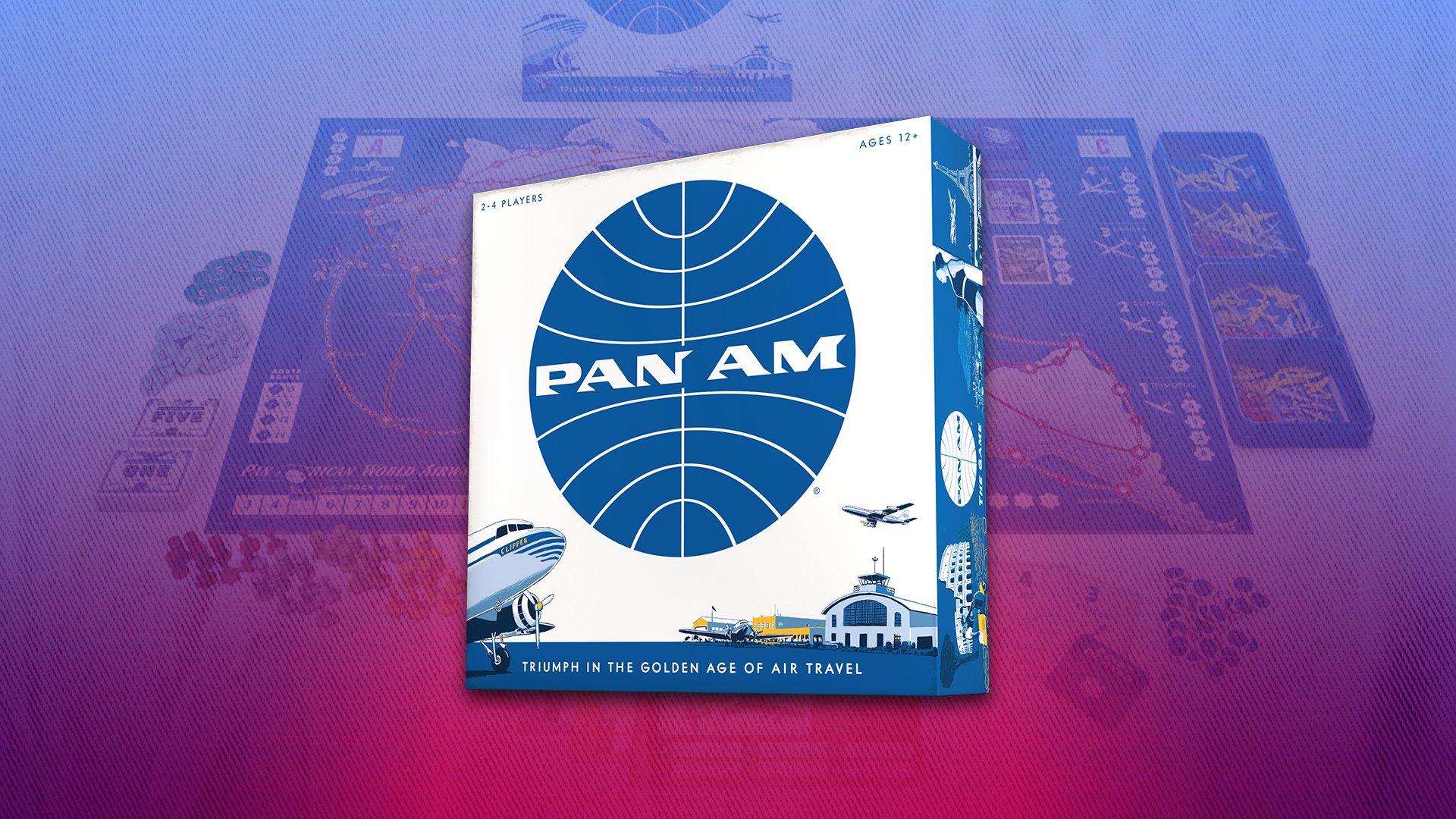 One of my favorite things about board games is the medium’s educational potential. It’s true that gameplay comes first -- a fun game is a fun game, after all -- but if it can teach me something along the way, all the better. This is why Pan Am excites me, I think; it appeals simultaneously to my love of board games and history, a “mechanizing” of sorts of the fondly remembered “golden age of air travel.”

Pan Am, published by Funko Games, is all about the titular airline. Founded in 1927, Pan Am -- short for Pan American Airways or Pan American World Airways -- is credited with a number of revolutionary innovations that propelled the global airline industry forward, including being the first company to offer commercial flights across both the Atlantic and Pacific oceans. It also helped spur the widespread use of jumbo jet aircraft and computerized reservation systems.

From a gameplay perspective, Pan Am is about route building and investing, bidding and planning. It accommodates two to four players, plays in roughly an hour, and is aimed at an age of 12+. Taken as a whole, the package is likely to be a bit dry and complicated for the youngins, but parents looking for a step up in complexity for game nights with their older kids are sure to find a lot to like here.

How is Pan Am played?

The ultimate goal of Pan Am is to own the most stock in the titular airline company. At the end of the game, this alone will determine the winner, so everything else you do is in service of that objective. Of course, you need money to buy stock in the first place, which you can earn by running your own plane routes.

Players control their own private airlines, companies in direct competition to the autonomous Pan Am. Inevitably, Pan Am will expand and absorb much of its opposition, which can result in a hefty payout if you play your cards right. To that end, a round of Pan Am consists of jostling for position across five areas on the game board.

On a turn, you’ll use your engineers to build airports, acquire destination cards, buy new planes for your fleet, establish new air routes, and snag some fun bonuses that can make it easier to accomplish these things. Four of the five areas can only accommodate a single engineer, and the controlling player will have to pay money in order to take the respective action there. This results in a dynamically fun auction mini-game that feels a bit like a game of chicken. Are you willing to pay more than your opponent for that precious Mexico City destination card?

The specifics of each action are a bit too complex to go into much detail here, but the important thing to keep in mind is that it’s all done in service of buying as much Pan Am stock as possible. At the end of a round, Pan Am will expand its presence on the map and swallow up any player-owned routes in its way, and its owner will receive a payout based on the level of that particular space. This, coupled with your individual income track, is the primary method of making money.

The game is played over a series of seven rounds, and each round is accompanied by an event card that alters some aspect of the board state. For example, in round one players might all receive a free destination card, and in round four you may get some free money. These event cards also determine the Pan Am stock prices and its rate of expansion, so they certainly dictate a lot of the game.

How complex is Pan Am?

I feel confident in saying that Pan Am is far too complex for a younger audience, but is probably suitable for older kids who are exploring a budding interest in hobbyist board games. The five action choices can be overwhelming, so I wouldn’t recommend breaking this one out for anyone younger than the suggested age of 12.

In my experience, it helps to keep in mind that everything you do in the game serves a single goal and work backwards from there: without stock, you can’t win the game. Without money, you can’t buy stock. Without charting plane routes, you can’t earn money. And without planning your destinations properly, you can’t charter routes.

To that end, I’d recommend focusing on your network of routes for your first game. There are some tricky rules that dictate how you’re able to play an airplane onto the map, and this is likely to be the biggest barrier of entry into Pan Am.

It works like this: in order to build a route between two cities, you need to have “landing rights” in both of them. There are four methods to achieving this, three of which involve ownership and the discarding of various destination cards. The fourth method is to construct an airport, which is one of the five primary actions you can take on your turn.

Further complicating matters is that each route can only be claimed by specific plane sizes. Shorter routes only require a trimotor, the smallest -- and cheapest! -- plane in the game. The longer routes, though, call for jets, which are the hardest to acquire. Luckily, the two most expensive plane sizes don’t unlock until later in the game, which makes the learning curve a bit gentler in this regard.

Admittedly, there is a fair bit to wrap your head around, and at least a bit of your first game will be spent leafing through the rulebook. However, once these initial hurdles are overcome, you’ll find a rewarding and entertaining experience waiting for you on the other side.

As an adult board game hobbyist, I was surprised by just how much I enjoyed Pan Am. The game comes from publisher Funko Games, which is known for its more child-friendly products, like Back to the Future: Back in Time and Godzilla: Tokyo Clash. By comparison, a game about a now-defunct airline is rather dry, especially from a kid’s point of view. It’s a shame because underneath the (subjectively) unappealing theme is a great game filled with meaningful choices.

I liken the entire package to a clockwork mechanism. There are five main actions on the board, just like there are all manner of gears and cogs and springs that make up the inner workings of a clock. These parts exist separately, independent of one another, but, when assembled, they all work together towards a singular goal: to tell the time. In this way, Pan Am’s actions are analogous to the gears and cogs and springs of a clock, and ownership of Pan Am stock is a player’s way of telling the time.

Is it a clumsy metaphor? Perhaps, but it feels appropriate in this case. There’s certainly a lot going on in Pan Am, which is why it’s hard to recommend for younger kiddos, but the clear and well-defined end goal trims out a lot of the fat. A fair bit of meat is left behind, though, and it might just be satisfying enough to keep the attention of your adolescent.

Disclosure: Funko Games sent SuperParent a copy of Pan Am for coverage purposes.