Minecraft's Oceans Are Worth Exploring With This New Update 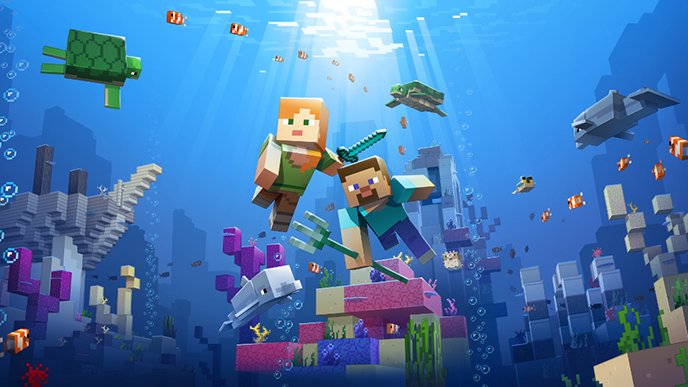 Back in May 2018, the first part of Minecraft’s major water-themed update, Update Aquatic, launched, bringing a whole new world of life and wonder to the game’s previously barren ocean.

There was plenty for kids and adults to sink their teeth into with that release, including coral, kelp, and nine new Ocean biomes, or in-game environments, to explore (and much more). Now, the second part of Update Aquatic has been released, and it’s also full of new goodies.

Players can now encounter gentle sea turtles, underwater bubble columns, and a dangerous new enemy called “The Drowned.” These underwater zombies (not to be confused with the game’s normal zombies) live in dark and deep water, but they’ll also come up to the surface when night falls.

Keep in mind, if your little ones are a bit too young for the game’s combat (or they’re simply not interested in it), Minecraft includes a “Peaceful” mode that stops enemy creatures from appearing.

Players can also now collect turtle shells, scute, and nautilus shells, among other items. If you want to see the full list of changes and additions with this update, check out Minecraft’s website.

These new features are now available for Minecraft players on Windows 10, Xbox One, Nintendo Switch, mobile, and VR devices. Unfortunately, the Minecraft team didn’t say when, or even if, the update will come to PlayStation 4.