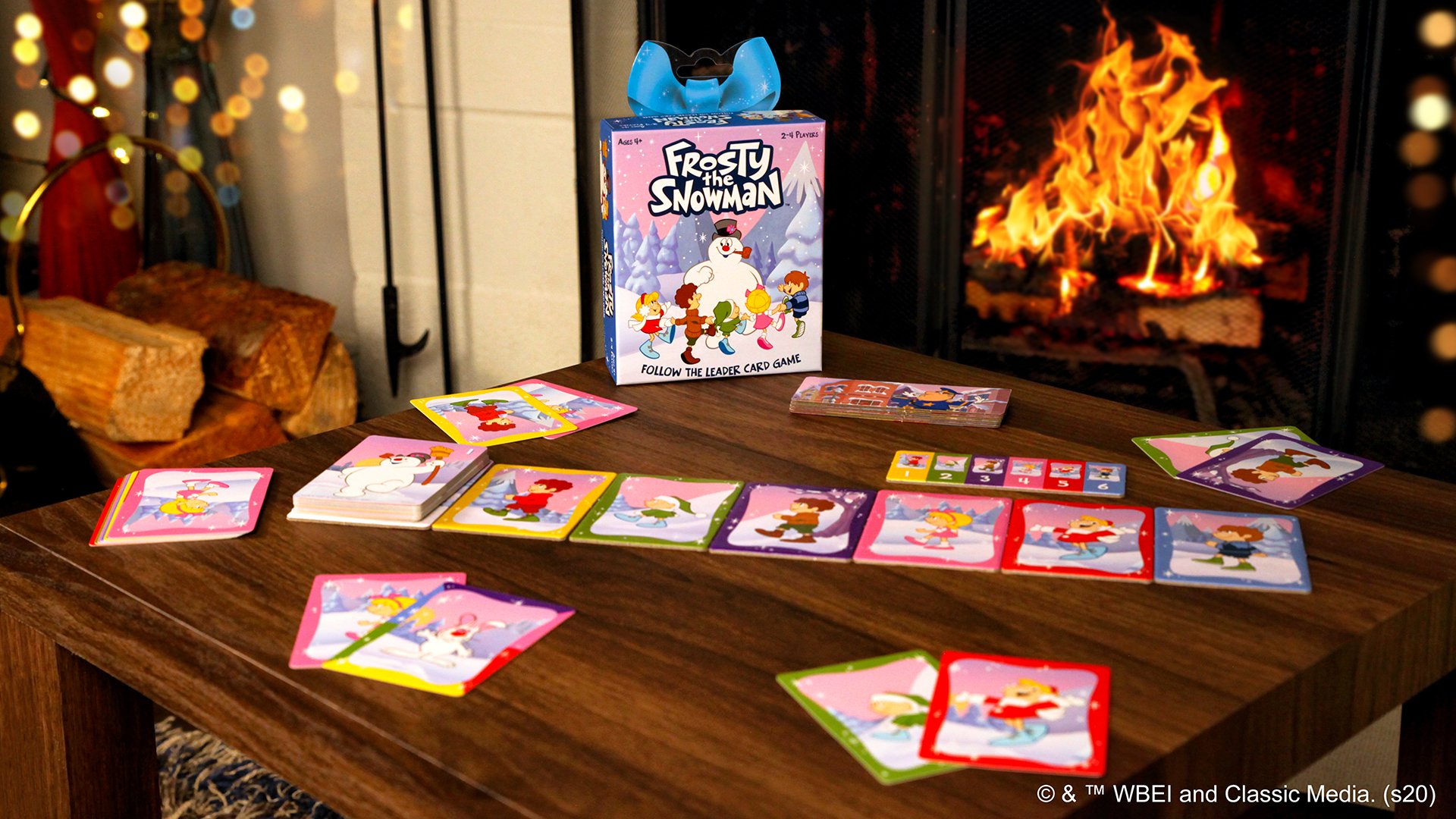 To celebrate the upcoming holiday season, Funko Games released a series of family-friendly card games based on popular Christmas movies, such as Elf, Frosty the Snowman, and A Christmas Story.

We recently had the chance to check out Funko’s Frosty the Snowman: Follow the Leader Card Game.

The Follow the Leader Card Game includes five Parade Tiles, which each contain pictures of the six children lined up in a different order. Each child is also assigned a specific color: pink, purple, yellow, blue, green, or red. These children (and their matching colors) are also represented on Kid Tiles that are placed behind Frosty in the center of the board.

At the beginning of the game, you line up the six Kid Tiles behind Frosty in numerical order (the Tiles are numbered 1-6 on the back, but these numbers are only used for the initial game setup). From there, you draw cards that match the Kid Tiles, which are used to move the kids forward and backward in the parade route (there are also wild cards that can be used to move any Kid Tile).

On your turn, you can complete one of three actions: play a card from your hand to move the matching Kid Tile one position forward or backward in the parade, work with another player to swap the locations of two Kid Tiles (in this situation, both players need to play a card matching one of the Kid Tiles that will be moved), or discard your current cards and draw new ones.

There are a limited number of cards to draw from the deck, and you’re challenged to complete at least three of the Parade Tile formations before running out of cards in order to win the game.

Since Follow the Leader is a cooperative game, you can freely chat with your teammates to strategically decide which action each player should take on their turn. While younger players may have trouble deciding what to do on their own, parents and older players can make suggestions and help them practice their strategic thinking.

The game also allows youngsters to practice their color matching and build their spatial reasoning skills. That is, if players can mentally manipulate the Kid Tiles by thinking one or more turns ahead, they can more efficiently complete the Parade Tile formations using the least number of cards.

The Follow the Leader Card Game is very simple and easy to learn, so it may not be that intriguing for older players and adults looking for a challenge. That being said, the game is a great option for families who want something that everyone can play together.

Frosty the Snowman: Follow the Leader Card Game is a cute and affordable card game that helps littles practice important skills while also encouraging kids, siblings, and adults to work together as a team. While the game may be too simple for some, it’s a good option for families looking for a quick and festive game to enjoy this holiday season (not to mention being a great stocking stuffer).

Frosty the Snowman: Follow the Leader Card Game is now available for $6.99. Each game has an expected play time of 15 minutes.