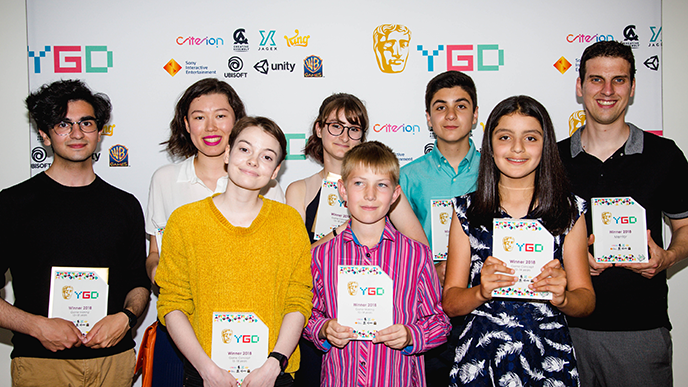 BAFTA, the British Academy for Film and Television Arts, revealed the winners of its 2018 Young Game Designers competition.

The competition was open to applicants 18 years old and younger. Entrants were competing to win either a Game Concept Award -- for creating a written idea for a new game -- or a Game Making Award -- for creating a playable game using computer software. Each category was split into two different age groups (10-14 year olds and 15-18 year olds), resulting in four awards in total.

Even though the competitors were as young as ten years old, their creations or proposals featured some advanced topics, including mental health and particle physics.

The Game Concept Award (10-14) was awarded to a pair of creators (aged 11 and 14), whose game, called Trapped, would follow a teenage boy through his life at school and focus on mental health. According to BAFTA, the creators felt one of the game’s “main appeals” would be that it would allow players to “apply the knowledge obtained in the game and use it when talking about mental health issues.”

The Game Concept Award (15-18) was awarded to a team of three creators, aged 16 and 17 years old. They created a concept for a story-based simulation game called Tea & Tartlets, which would allow players to run a cafe, unlocking recipes and perks as they progressed through the in-game levels. A romance storyline would also be involved.

For the game creation awards, the Game Making Award (10-14) went to a 10-year-old whose game, called Maggie, allows players to guide a red cube named Maggie through a series of puzzle platforming levels. Maggie has the ability to stretch and grow in size, and players need to use this ability to grow and shrink to complete stages.

Finally, the Game Making Award (15-18) was awarded to a 17-year-old who created a puzzle action game called Super Boson. The game is based on particle physics, and was designed to inspire younger players to become interested in STEM “by portraying science in a fun and engaging way.”

The winners received a variety of prizes, including a mentoring package and access to workshops and studio tours. Winners also received a trophy, as well as games, software subscriptions, merchandise, and more.

Winning the Young Game Designers competition is already an exciting feat, but past winners have gone on to have real success in the video game industry. For instance, BAFTA said 2016 winner Daniel Smith has partnered with Ripstone Games to have his game, The Spectrum Retreat, commercially released on multiple platforms.

If you live in the U.K. and have kids interested in video game development, check out BAFTA’s website to learn more about the Young Game Designers competition.

To learn more about some of the tools kids can use to create their own video games, check out our guide.