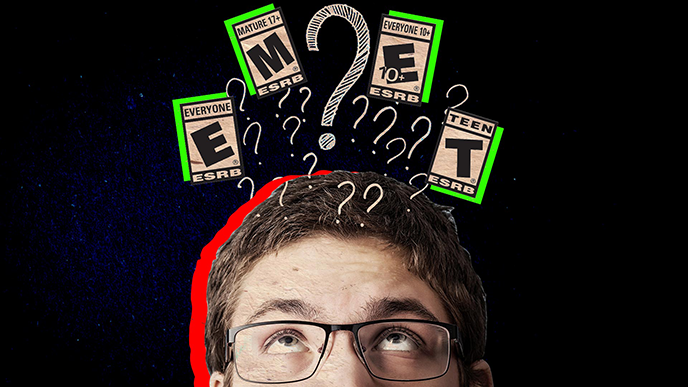 In 1994, the Entertainment Software Rating Board (ESRB) was created in response to concerns over violent video game content. The ESRB introduced a rating system for video games, which gives each video game a rating based on its content and age appropriateness.

There are six different ESRB ratings, along with a variety of “content descriptors,” which, where appropriate, explain what a game contains in a bit more detail. If you’ve ever wondered what each rating means, or what kinds of games fit each rating, we’re here to help you out.

As the name suggests, EC or Early Childhood games are designed specifically for young children. The games may be educational, or simply contain themes and characters aimed at young players.

The ESRB says these games “contain no material that parents would find inappropriate.”

Some games with the EC rating are Bubble Guppies and Sesame Street: Elmo’s Musical Monsterpiece.

Games with an E rating are typically appropriate for players of all ages.

The ESRB says games with this rating may contain “minimal cartoon, fantasy or mild violence and/or infrequent use of mild language.”

Depending on the game, you may see content descriptors such as “Comic Mischief” and “Mild Lyrics” on an E-rated game.

The E10+ rating is placed on games that are appropriate for everyone at least 10 years old.

The ESRB says these games may have “more cartoon, fantasy or mild violence, mild language and/or minimal suggestive themes.”

Games with an E10+ rating may have content descriptors such as “Fantasy Violence,” “Mild Blood” or “Alcohol Reference.”

Some popular E10+ games are Lego The Incredibles, Minecraft, and The Legend of Zelda: Breath of the Wild.

The T rating is for games that are only appropriate for players aged 13 and up. These games may contain more violence than games in the previous categories.

T-rated games may have content descriptors like “Violence,” “Partial Nudity,” and “Blood and Gore,” depending on the game.

Some popular T-rated games are Fortnite, Overwatch, and The Sims 4.

M-rated games are only appropriate for players aged 17 and older. Depending on the game, the ESRB says M-rated games may contain “intense violence, blood and gore, sexual content and/or strong language.”

These games may have a variety of content descriptors related to adult content, such as “Sexual Themes,” “Use of Drugs,” and “Mature Humor.”

Some of the most popular video game franchises come with an M rating.

A few examples include Grand Theft Auto V, God of War, and Call of Duty: WWII.

The AO rating is placed on games that are only suitable for adults aged 18 and up. This is a rare rating, with a Wikipedia list showing that only 29 games have ever received the rating. Some of these games were edited so they could receive an M-rating instead (an M-rating is more desirable than an AO rating, as an AO rating may prevent stores from selling a game).

The ESRB says games with an AO rating may contain “prolonged scenes of intense violence and/or graphic sexual content and nudity.” As an example, Manhunt 2, a violent video game from developer Rockstar, was originally given an AO rating before its launch in 2007. In response, Rockstar edited the game so it would meet the M-rating requirements.

The ESRB technically has one final label -- RP (Rating Pending) -- which is placed on games that have been submitted to the board for evaluation, but have yet to be rated. You may see this rating on a game’s marketing materials, like in a video trailer, before it launches.

It’s important to note that not every video game receives an ESRB rating. You’re likely to find an ESRB rating on every game you see on a store shelf, but games purchased digitally, for instance on Steam, may not have an ESRB rating to go by. In these cases, we recommend checking out trailers, screenshots, and other information about the game before deciding whether it’s appropriate for your family.

Finally, if you ever want to search for a game’s ESRB rating while you’re away from a computer, you can download the free ESRB Rating Search app on your mobile device.