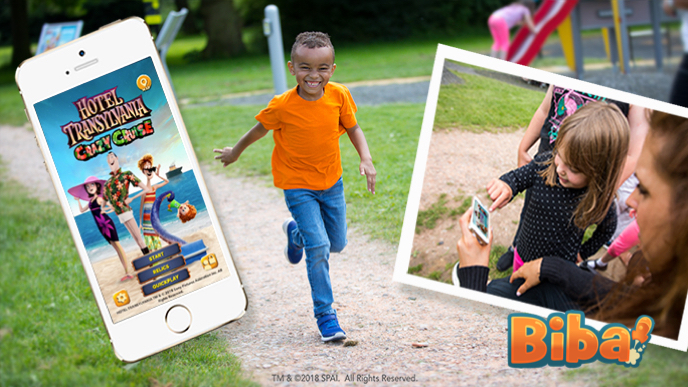 Hotel Transylvania 3: Summer Vacation hits movie theaters July 13, but you don’t need to wait until then to let your kids jump into a new adventure with Drac, Mavis, and the rest of the film’s friendly monsters. A new mobile game based on the film gets kids into the action before it hits theaters this Friday.

Hotel Transylvania: Crazy Cruise challenges players to restore magical relics to islands inhabited by monsters. The game emphasizes physical activity and was designed to be played by parents and kids at their local playground. It “parallels” events from the new film, and turns real-world structures, like the monkey bars, into part of the game’s world.

In each “Crazy Cruise” game session, parents can hold the smartphone as they and their children interact with playground equipment to play on-screen mini-games. Kids may need to come to their parents’ rescue if they get into some in-game trouble while playing. The game uses augmented reality technology to bring the film’s monsters to life, letting kids pose alongside monsters so parents can take a picture.

Hotel Transylvania: Crazy Cruise is available to download on iOS, Android, and Amazon devices. The game is regularly priced at $3.99, but you can download it now for $0.99 on iOS or Android as part of a special limited time promotion.