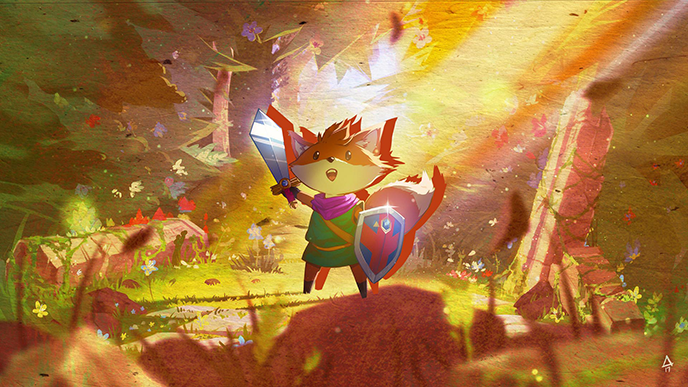 E3 is always full of bright, beautiful games to experience and explore. It’s impossible to see them all, even in the three days that the showfloor is open. This year, one of the highlights of my E3 was sitting down and checking out a little game called Tunic. Tunic was one of a few independent (indie) games that Xbox highlighted during its action-packed press conference. And it’s probably one of the most interesting kid-friendly titles that ID@Xbox (the indie game label at Xbox) has in its (future) game library.

Tunic is a game about exploration, nature, and finding your way through a land that clearly wasn’t meant for you. “I think one of my favorite things about video games is the feeling of being dropped into a space and not fully understanding what's in store,” the game’s creator, Andrew Shouldice, said in an interview with GameDaily. “What are you going to see? Where are you going to go? Feeling insignificant in a place far bigger than you could comprehend. Feeling like you don't belong. Feeling like you're sneaking into a place that no one wants you to be in.”

This tiny fox friend, as Shouldice has often referred to Tunic’s adorable playable character, is in a big, scary world that doesn’t give him a whole lot of instruction as to where to go or even what to do. It harkens back to old school Nintendo games, which is where the game’s creator pulled inspiration from, especially The Legend of Zelda. If you’ve been taking your kiddos through Link to the Past on the SNES Classic, this is a great follow-up to that classic dungeon-crawling feel.

Why are you excited about Tunic?

Tunic’s charm isn’t just in the game’s mechanics, however. During the closed-door preview during E3, Shouldice put a finger to his lips and got the journalists in the room to really lean in, listen to the music, and feel it. The graphics are disarming and adorable, but the real magic is in the music and sound design. You can get a bit more of a sense of that in this trailer.

Tunic’s friendly demeanor doesn’t necessarily denote the difficulty of the game, either. Classic dungeon-crawlers like The Legend of Zelda are deeply challenging, especially the earliest titles. (I’m looking at you, Legend of Zelda 2.) But Tunic appears to be more interested in letting the player decide where they will go and how they’ll approach the game. If they decide that they want to wander down a less-defined path, then they can. They may need to run away and regroup before advancing, but that kind of choice is what makes games like Tunic so interesting.

Do you think the difficulty level will be too intense for kids?

I think that Tunic has the ability to challenge players of all ages, but initially? No. I don’t think that Tunic’s approach to exploration and combat will put unnecessary pressure on kids to be the best of the best when it comes to gaming. Instead, based on what I’ve experienced with Tunic, I think that it will encourage failing, as most challenging games tend to do. The great thing about failing in a game where the stakes are fairly low is that it isn’t about ramping up stress levels — it’s about learning something new and trying something different. It’s problem-solving and we’re always trying to get our kids to focus on problem-solving, whether that’s logical or lateral.

Tunic’s fox-friend is the perfect avatar for teaching some of these lessons without necessarily being condescending or putting too much pressure on the player. After all, the player decides their path through the game. That’s the joy of a semi-open world.

What age level do you think this game will be appropriate for?

Tunic’s bright and lush landscape, coupled with beautiful music and an empathetic main character, provides a wonderful backdrop to a game that is both challenging and engaging. A kiddo who doesn’t have a whole lot of experience with games may find Tunic to be a good entry-point into dungeon-crawling games, because all exploration is up to the player.

If the player decides that they don’t want to engage with a monster or a baddie, they can run away to a different zone or part of the level. They can take their time in exploring their surroundings, experimenting with interactions throughout the game, and examining the different pieces that make up Tunic’s environment. Combat is necessary to progress the story, but it may not be necessary to enjoy the game.

So, this isn’t about age. This is about experience and comfort.

When does the game come out and for which platforms?

Tunic will be available on Xbox One and Steam. Shouldice and the game’s publisher, Finji, haven’t announced any additional platforms at the moment. They’re shooting for 2019. Keep your eye on SuperParent for our Tunic review when the game is released.