Check Out This Kid-Sized Recreation of Luke Skywalker's Landspeeder 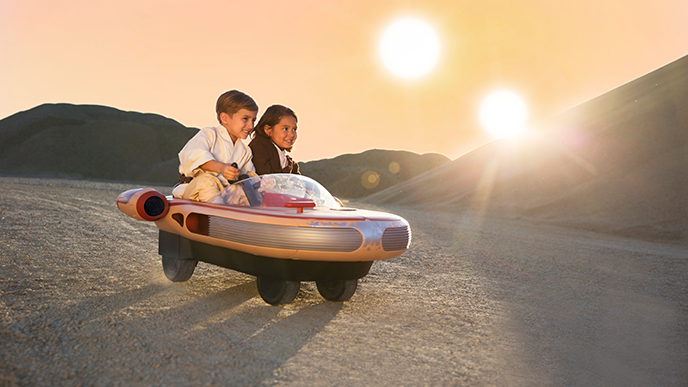 If your kids are Star Wars fans, they’ll probably love this. Radio Flyer released a small version of Luke Skywalker’s Landspeeder that kids can drive.

As reported by The Verge, the vehicle is a pretty faithful recreation, including cosmetic “damage” that matches the defects on Luke’s own vehicle from the first Star Wars movie. The Landspeeder has two speed settings, allowing little ones to reach either 2 mph or 5 mph, depending on the setting. Parents can also limit the vehicle to its lower setting if they prefer. As kids drive, the Landspeeder lights up and plays sound effects, adding to the fun. Kids can drive the Landspeeder for about 40 minutes before its battery dies and needs to be recharged.

The Verge said the Landspeeder was originally sold at Toys "R" Us, but with those stores now closed, parents can pick up the Landspeeder from Radio Flyer’s website for $249.99. That might seem like a high price to pay for a “toy,” but it’s pretty in line with the price of other powered vehicles for kids, like Power Wheels Jeeps and Mustangs.

If your little ones want to be the next Rey or Luke Skywalker, but you’re not sure about spending $250 on a single item, there’s no shame in sticking with action figures and pretend lightsabers instead.