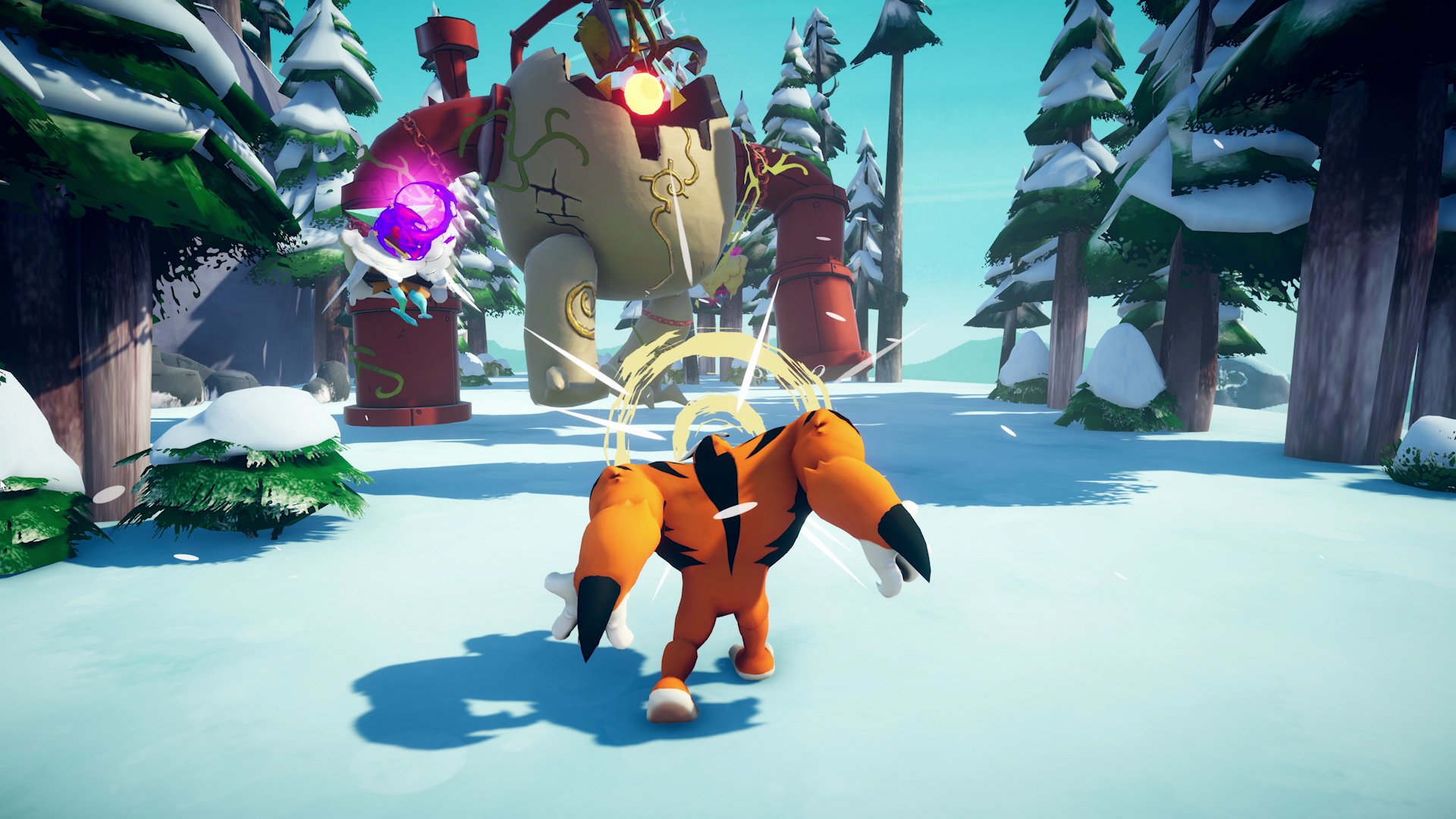 Ben 10: Power Trip is the latest video game inspired by the popular animated series Ben 10, which follows the adventures of a young boy named Ben Tennyson, who has the ability to transform into a variety of aliens.

Power Trip is available on Switch, PlayStation 4, Xbox One, and PC. We had the chance to go hands-on with the Switch version of the game.

In Ben 10: Power Trip, Ben, Gwen, and Grandpa Max are on a European vacation that’s interrupted when a magician named Hex destroys Ben’s ability to transform into his alien companions. You’ll need to help Ben recover his powers and defeat Hex before he can carry out his evil plans.

Ben 10: Power Trip can be played by a single person, and the game also supports local multiplayer for two people in the same room. In this case, the second player becomes Kevin Levin, who also has the ability to transform.

Ben 10: Power Trip is an open-world adventure game, meaning you can freely explore a large in-game world and revisit areas at any time. While you begin the game near a Ranger Station in a large forested area, your journey will eventually take you to a snowy ski resort, as well as a bustling city near a river.

Once you complete a few tutorial missions, you’re given free reign to explore and complete other missions as you see fit. That is, you’ll make progress through the story by completing missions for the game’s citizens, but you can choose when you want to explore certain locations (that is, the forest, city, or ski resort).

Ben starts out with access to a single alien -- Heatblast -- who can jump higher than other aliens by using fire to propel himself into the air. As you complete story missions, you’ll unlock five more aliens, each with different abilities. For instance, Four Arms is a strong alien that can break through walls and lift heavy objects, while XLR8 can run at a super fast speed and grind on electric wires. Some areas and items are only accessible when using specific aliens.

While your overall goal is to track down and defeat Hex, many of the game’s missions will simply have you assist the game’s citizens. As examples, you may need to find a lost cat or clear monsters from inside a farmer’s barn. These missions are easy to complete, and the game does a nice job of guiding players through the experience (for instance, on-screen prompts will tell players when a specific button needs to be pressed or a certain alien is required to progress).

In addition to story missions, the game includes side missions and activities that you have the option (but are not required) to complete. You’ll also need to take on a few bosses, though, unfortunately, these boss battles have the same basic design with little variety.

In terms of combat, you can defeat monsters in real-time battles using any of Ben’s alien companions, and you can freely switch between aliens at any time. While some battles are mandatory, you can also run away from some encounters if you’d rather not fight. During a battle, you’ll need to quickly mash buttons to perform light and heavy attacks, and if you press these buttons in the correct sequences, you can perform powerful combo moves (you can also upgrade Ben to make him stronger over time).

The game’s camera can become a bit “wonky” during combat, especially if you’re in a small area or near an in-game object that can obstruct your view. And unfortunately, that’s only one of the game’s technical problems.

What other problems does the game have?

Ben 10: Power Trip suffers from a number of technical issues, though we were unable to test whether these issues exist on all platforms, or only on the Switch (the Switch is technically a less powerful console).

Without going into the nitty gritty of every issue we encountered, there are two glaring problems that stand out. First, as we mentioned, XLR8 can run at a very high speed, which allows you to quickly travel across long distances. However, XLR8 can sometimes move too fast for the game, so it has to pause for a moment to load.

The game software also crashed numerous times on the Switch, forcing us to reload the software before being able to continue (thankfully, the game autosaves quite frequently, so we never lost a significant amount of progress).

Are these problems deal-breakers?

Not in our opinion. While there are a few things we’d change about the game’s basic design (such as adding more variety to the boss battles and placing additional fast travel spots around the map because there currently aren’t enough), Ben 10: Power Trip is still a fun little game.

Its technical problems are annoying (especially the software crashes), but, in theory, they can be fixed in future updates, if the developer decides to address them.

Ben 10: Power Trip is a short -- but fun -- open-world adventure game that doesn’t require players to be familiar with the cartoon series to enjoy it.

If you only run through the game’s main story missions, without completing any of the side missions or going after collectibles, you may be disappointed by its short length. However, participating in these side activities adds considerable gameplay time to the experience.

Overall, Ben 10: Power Trip definitely isn’t a perfect game, but if you have the patience to deal with its technical issues (or you’re already a fan of Ben 10), it’s fun enough to see the story through to the end.