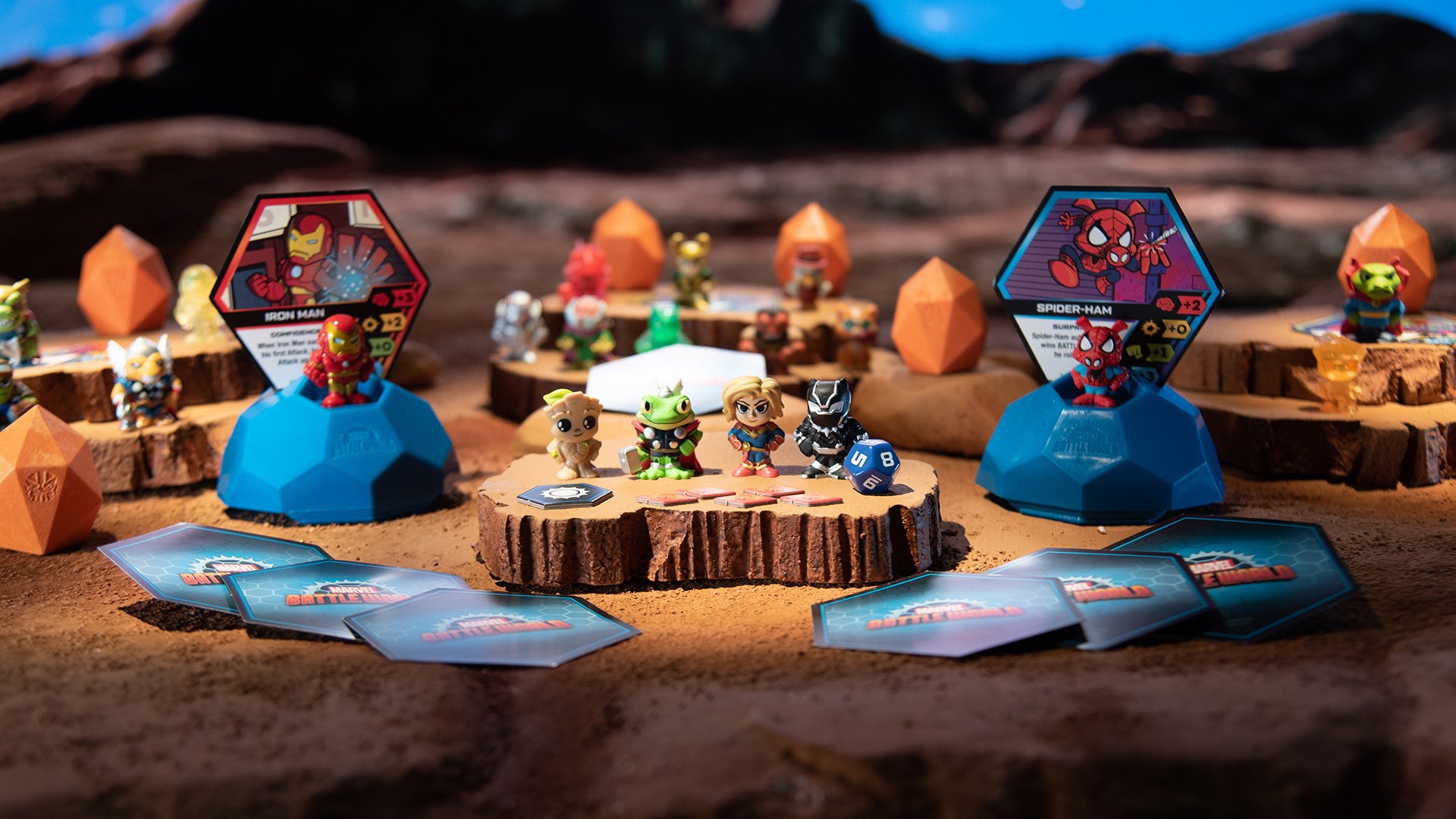 The villainous Thanos has managed to capture the greatest heroes of the Marvel universe and trap them on Battleworld, his patchwork planet full of evil robots, dark elves, zombies, and...Hand monkey ninjas. As one of a growing roster of superheroes, it’s up to you to free your allies from the clutches of Thanos, and overcome Battleworld’s many threats.

This is the premise of Marvel Battleworld: Mystery of the Thanostones, a cooperative tabletop adventure from Funko Games for one to four players (with a recommended age of 6+). The game is a marriage of superhero combat and blind bag collectables, and the result is a deviously alluring sum that will appeal to both fans of the Marvel universe and completionist collectors.

How is Marvel Battleworld: Mystery of the Thanostones played?

Battleworld is a game about using superheroes to defeat villains. These villains appear on hexagonal tiles, which, when placed on the tabletop, also make up the physical layout of Battleworld itself. Each turn, players use their controlled heroes to fight one of the enemies in Battleworld. If they’re successful, you get to claim victory and flip that tile over. Win a predetermined number of battles and you win the game! Lose three of them, however, and it’s game over.

Each hero has a set of four battle stats on their card, and they’re particularly strong in one or two of these. The symbols representing these stats also appear on the encounter cards in Battleworld. When initiating a battle, you’ll choose one of the stats on that particular card and roll a combat die against the number there. To that number, you’ll add the corresponding number on your hero’s card, and if the result is higher than the number on the encounter card, you advance on that battle card! Do that enough times and the encounter is considered won.

Each hero also includes a special ability to keep in mind when initiating a battle. For example, Spider-Man (and his nearby allies) can reroll an attack once at blue battles, and Iron Man can attack a second time if his first attack is successful.

As a game progresses, a battle card depicting a “Thanostone” might appear. This is where Battleworld’s wily blind bag collectability comes in. An encounter on a Thanostone begins like any other battle, but when won you get to crack open a physical bling bag, revealing a brand new hero that you can add to the game.

Battleworld bundles come in two forms: the “Mega Pack,” which features six heroes--including four mystery heroes trapped in Thanostones--and the “Battle Ball,” a cheaper expansion with only two heroes inside. Given the exceptional popularity of blind bags, this business model is a shrewd and calculated move on the part of Funko and Marvel. A tie-in animated series has also been produced, which is sure to grow Battleworld’s online presence.

How complex is Marvel Battleworld: Mystery of the Thanostones?

In short: not very. Gameplay in Battleworld is rather straightforward: roll a die, add that number to the relevant stat, and compare to a target sum. For my niece (7), the basic math was engaging, but for my nephew (5), it was a bit of a struggle. In theory, a game like this has the potential to help teach fundamental addition, which is a positive in my book.

During a game, there are some choices to make, like deciding which battle cards to take on, which is often informed by your hero’s specific strengths and abilities. Weighing one battle card against another is about as complicated as it gets in Battleworld, which will be a positive or a negative depending on your opinion and the age of your kiddos.

As a cautious (and perhaps bitter) adult, it’s easy to be put off by the business model of Battleworld; building lore and gameplay around blind bag purchases feels devious, and makes for a negative first impression. However, it’s impossible to deny how enthusiastic my niece and nephew were about the prospect of cracking open Thanostones and revealing new heroes.

By far, this was their favorite part of Battleworld. While we were playing, the kiddos were constantly eyeing those Thanostones, wondering out loud about the heroes that might be inside. It was this thrill of discovery that served as the primary motivation to keep playing. However, once we overcame the Thanostones in combat, and our blind bags were open, their enthusiasm seemed to drop noticeably.

For that reason, I’m not sure if the core gameplay of Battleworld has enough meat on its bones to keep young ones engaged after you run out of Thanostones to open. Almost immediately upon cracking the last one, the kiddos were clamoring for me to buy more expansions. Obviously, this is by design, and I tip my hat to Funko for the canny scheme.

As an adult Marvel fan, I was also tickled by some of the heroes included in Series One of Battleworld. Beta Ray Bill, Captain Americat, Zombie Mysterio, and a number of other obscure characters have the potential to pop out of a Thanostone. I must admit that I also found myself excited when it came time to open them up! Given the enormous scope of the Marvel universe, it’s very easy to grasp the potential expandability of Battleworld moving forward.

One potential purpose for Battleworld could be as a stepping stone to more complicated games. In many ways, the dice-based combat is just a (Thanos)stone’s throw away from some of the more involved tabletop games, and something like King of Tokyo might be a logical next step. Heck, even something as complicated as Star Wars: Legion might be plausible, but that’s getting a bit ambitious.

At the end of the day, Marvel Battleworld: Mystery of the Thanostones is a simple and devilishly calculating little game. Tapping into the popularity of Marvel superheroes and blind bags is its defining characteristic, but there is a decent enough experience underneath. Whether or not your kids find it engaging after opening up the Thanostones feels like a coin toss, but until then Battleworld is undeniably intriguing.