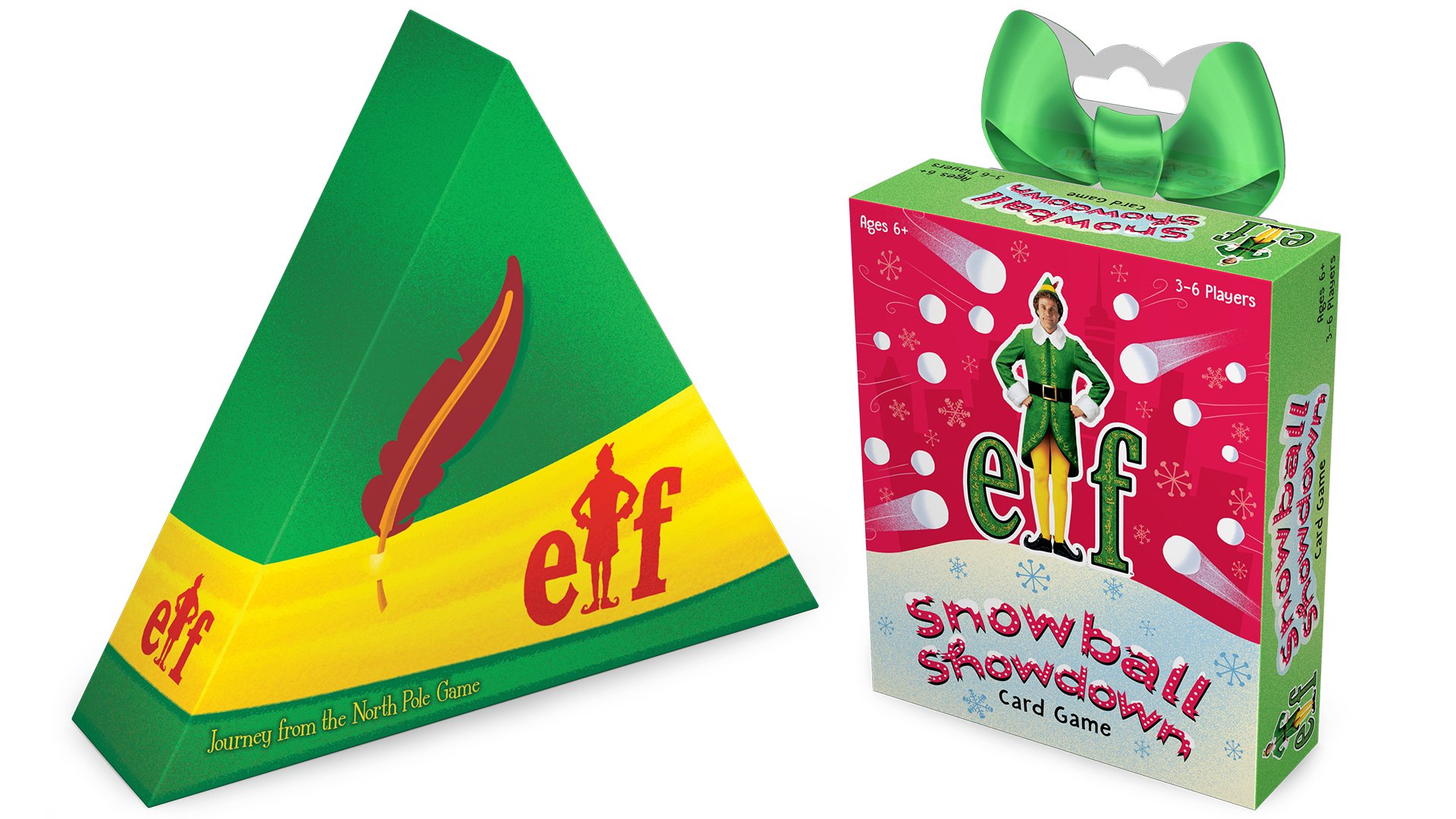 With the fall season upon us, and the holidays rapidly approaching like Santa’s spirit-powered sleigh, now is a great time to set the tone for upcoming festivities. For many families, tabletop games are a choice group activity during the colder months, and Funko Games is getting ready to release a pair of games set in the world of Elf that are sure to warm you up like a cup of the World’s Best Coffee.

In Journey From the North Pole, players guide Buddy the elf from the North Pole all the way to New York City. Along the way, he’ll make stops in the Candy Cane Forest and the Gumdrop Village, snack on some maple syrup and gingerbread cookies, visit friends, and maybe even pick up a souvenir snowglobe from the Empire State Building.

At the start of the game, players are dealt secret mission cards that depict three of the seven total locations on the board. These are the destinations that are worth points for that player, and they’ll only score if Buddy visits them by the end of the game. The earlier in the game he visits, the more points that location will be worth.

The trick, though, is that all players are controlling Buddy. On a turn, you’ll play one or more path cards from your hand, and Buddy will follow the trail you set for him. If he touches a location, the associated tile is locked into a point value. You want to make sure your secret locations are visited quickly, as the first two tiles are worth three points, while the second two are worth two, and the final two are worth one point apiece. Once six locations are visited, the end of the game is triggered.

That all players influence where Buddy travels is what makes Journey From the North Pole an absolute delight. Watching the little elf figurine zigzag around the board is unpredictable fun. In our experience, though, there is a risk that some kiddos might get frustrated when another player inevitably turns Buddy away from a destination they’ve been chasing down. Luckily, the game is short enough that this is nothing more than a minor thing.

Snowball Showdown is a card game version of Elf’s famous snowball fight scene. You know the one, where Buddy machine-guns snowballs at the bullies in the park. Here, a pile of facedown cards is scattered around the table like a pile of snow, and you’ll pull from it like you’re picking up snowballs.

Snowball Showdown is a game of quick maneuvering and elimination, and it requires several players in order to truly shine. On your turn, you choose another player at whom you’ll throw snowballs, then pick one or more snowball cards of the same color from your hand. To defend themselves, the other player will roll a die that can either add some snowball cards to their own hand, or deflect the attack to a neighbor.

To successfully avoid a hit, a defender needs to be able to match the number and color of the snowballs being heaved in their direction with cards from their hand. They can also play a dodge card, which will also turn their neighbor into the defender.

Snowball Showdown is heavy on the luck, and player elimination might be a turnoff for some kiddos, but this is a bite-sized experience that can play in five minutes.

Are these games appropriate for my kids?

Of the two games, my niece (6) and nephew (5) gravitate more toward Journey From the North Pole. The concept of moving Buddy around the board and the inclusion of many recognizable elements from the Elf movie make it a bit more accessible. And the way he follows the path cards means that kiddos will need to flex their spatial awareness muscles in a fun and unique way.

Snowball Showdown, on the other hand, is a bit too random for their tastes. Everything you can do on a turn is dictated by luck (draw cards, roll a die). Also, player elimination has sadly led to some hurt feelings. On a positive note, there is some basic math required here, which kept the kiddos engaged in our case. The very short playtime also alleviates a lot of the negativity here.

In all, a lot of the appeal comes from the Elf theme, which is going to go a long way in determining if these games are right for your family. In ours, Elf is a very popular holiday movie, and my niece and nephew really enjoyed pointing out the recognizable elements in the games. Journey From the North Pole in particular was a hit for us, and I certainly foresee the game hitting the table often this season.