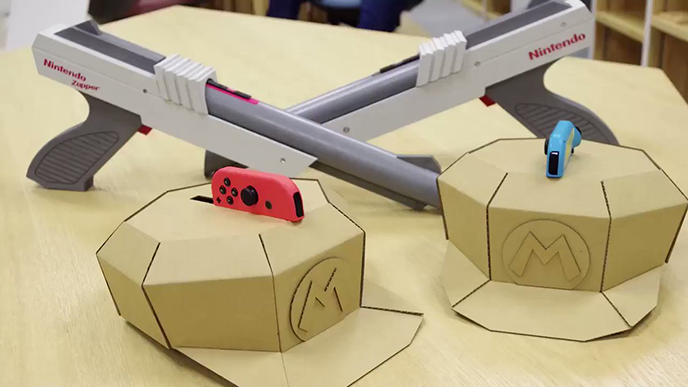 Nintendo Labo released earlier this year, allowing kids and adults to build their own Switch controllers (called Toy-Cons) out of cardboard and use them to play a variety of mini-games.

The Nintendo Labo Switch software comes with a feature called Toy-Con Garage, which lets players create their own games and programs that utilize Labo’s stock Toy-Cons, or ones players have created themselves. Imaginative players have used Toy-Con Garage to create everything from a digital face for their stuffed animals to recreations of Nintendo’s old Game & Watch games. (Launched in 1980, the Game & Watch series featured super simple games that were played on a small LCD screen.)

As reported by Engagdet (via ITMedia), two Japanese designers have gone above and beyond with a recent Nintendo Labo creation, designing a working game of laser tag using two pairs of Joy-Con controllers.

The pair created two replica NES Zappers, the light gun accessory released for the Nintendo Entertainment System, to hold one set of Joy-Cons. The other two controllers sit on top of cardboard hats, and serve as the target to shoot at. The Switch software itself keeps track of how many times each player has been hit, and their remaining in-game health.

Toy-Con Garage takes time to master, so be sure to encourage your kids to keep tinkering if they’re afraid they won’t be able to create something this ambitious. There seem to be endless possibilities for what Nintendo Labo can do, so your kids can definitely create something awesome, too.