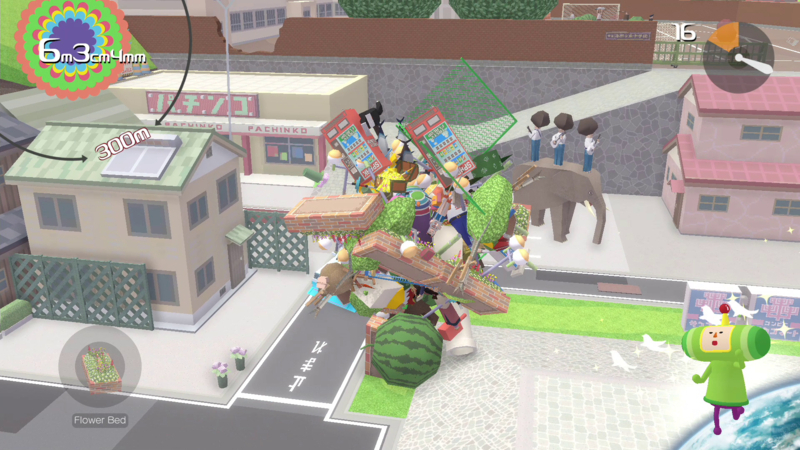 Your katamari starts at a specific size in each stage, and you can only collect objects that are “small enough” to stick to the katamari at the time. For instance, in the game’s early stages, you may start out by picking up things like thumbtacks and dice. As the katamari grows larger, you can pick up bigger objects. Depending on the stage (and how much time you have to roll around), you’ll eventually be able to pick up people, buildings, and entire chunks of land (to pick up an object, you simply need to touch it with the katamari).

The game’s normal stages are timed, and you’re challenged to grow the katamari to the required size before time runs out. In addition to these normal stages, there are unique levels that have other requirements. For instance, in the “Make Gemini” level, you’re asked to collect as many sets of “twins” as possible.

On the surface, the idea of rolling up humans, animals, and more onto a katamari, and then turning that katamari into a star or constellation may seem grim (are you killing these people?), but the Katamari Damacy games are bright, colorful, and way too silly to take seriously. They’re also some of our favorite games here at SuperParent, and we can’t recommend them enough.

Katamari Damacy Reroll will be released on PlayStation 4 and Xbox One on November 20, 2020. The game is rated E for Everyone by the ESRB.