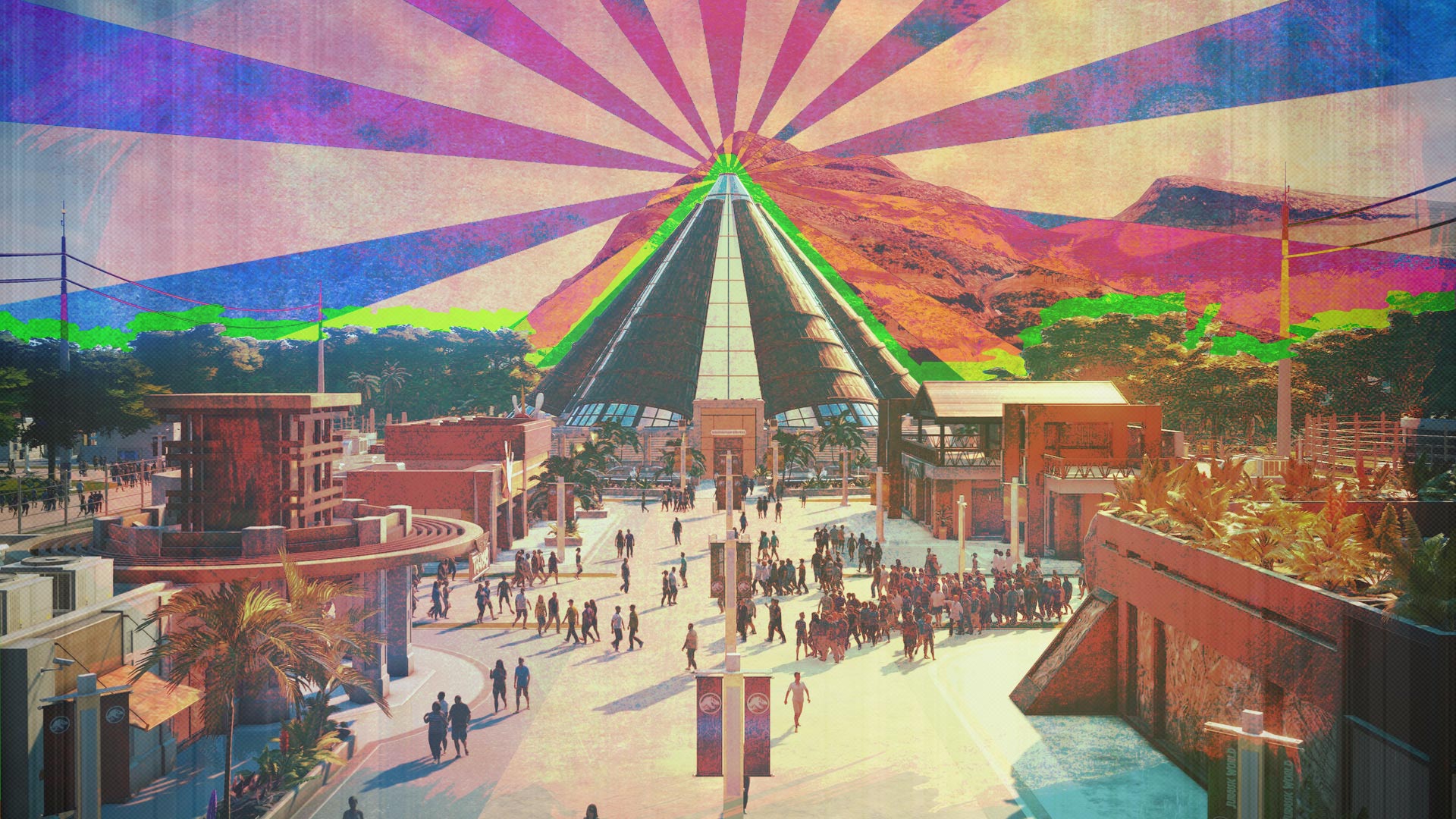 With a new Jurassic movie in theaters, kids will be experiencing a fresh wave of dino-mania, but the movie's official tie-in game, Jurassic World Evolution, does a disappointingly poor job of capturing the awe and excitement of its big screen counterpart.

What do you do in the game?

You’re playing as a new Jurassic World park manager, tasked with building successful new parks on each of the five islands in the movie’s archipelago – Las Cinco Muertes or The Five Deaths. You do this by constructing buildings to breed new dinosaurs, while sending out teams to fossil digs and then extracting DNA from whatever you find. Once you have at least 50% of a complete genome for a dinosaur, you can try hatching one. The more complete the DNA sequence, the higher the chance it will work.

You also have to build enclosures for your animals, as well as land and air ranger stations to keep both dinosaurs and tourists safe. Those tourists will also need entertainment and refreshment – apparently the chance to see living dinosaurs is no longer a big deal – so placing gift shops, fast food concessions, bowling alleys, and arcades is also required, along with viewing platforms that give good views of your menagerie.

The design of your park is entirely up to you, right down to where the pathways go, but you’re limited in what you can build until you’ve progressed through the island chain, facing tougher management challenges on each new location. The second island, for instance, is beset by tropical storms, which means you need emergency shelters and weather protection systems. The third starts you out with the remains of a derelict park, and hundreds of thousands of dollars in the red. And so on.

Gaining a three-star rating on an island gives you access to the next, and you can hop between them at will, adding newly unlocked dinosaurs and building types that were unavailable the first time you played an island, and finishing off missions for your trio of park advisors.

You have to do missions?

These missions are what will give the game its structure for the majority of your playing time. Your advisors cover science, entertainment, and security, and each will come to you with specific demands that will increase your influence with each department. The higher your influence, the more new features you can unlock.

The trouble is that these “missions” are repetitive and often illogical. Rather than offering three distinct avenues to develop your park, the boundaries between them are blurred almost immediately. Your security head may task you with building a hotel, or selling a certain kind of dinosaur. The scientist may insist you build a fast food bar. It’s wildly inconsistent, and soon becomes clear that it’s simply a very shallow way of keeping you busy.

But the dinosaurs are cool, right?

The dinosaurs are very cool. This is one area where Jurassic World Evolution nails it. Every time you hatch a new dino and release it into an enclosure you get a canned animation of it emerging into the paddock, and when it's something new or iconic – such as the Tyrannosaurus Rex or Brachiosaurus – this cinematic close-up feels truly eventful. They look good as well, with detailed models that are very well animated. If any aspect of a Jurassic World game needed attention, it’s the dino stars, and Evolution delivers on that promise at least.

You can also get up close to your creatures by taking manual control of the ranger jeeps and helicopters, although your interactions with the dinosaurs are limited to shooting them with dart guns – either to medicate them, or tranquilize them if they escape. Still, kids will certainly be thrilled to get the chance to experience their park at a more intimate level.

Does it get much else right?

Jeff Goldblum pops up frequently, in voice form at least, to offer witty bon mots and ominous warnings in his aaah unique uhhh style of ahahaha speech, and he actually has more to say in this game than he does in the new Fallen Kingdom movie. A few other stars of the movie have recorded a handful of unenthusiastic lines – except for Chris Pratt who merely gets a serviceable impersonator – and John William’s famous orchestral score is put to good use.

So what are the problems?

The game is both too fiddly and frustrating, yet also very shallow and repetitive, making it hard to recommend even to adult fans and even harder to endorse for kids. The camera is slippery and object placement annoyingly fussy. Each island traps you in awkward corners of usable terrain that severely limit what you can build and where. Building your park is simply not fun, and in a park building game that’s kind of a dealbreaker.

The game’s biggest issue is how quickly you’ll hit the ceiling of what’s possible. Once you’ve built a dinosaur enclosure in the first five minutes of the game, you’ve experienced the extent of what will be required for the hours to follow. Unlike the movies, there are no flying dinosaurs or aquatic dinosaurs in the game, so all you’re ever really doing is fencing off big fields and letting dinos wander around them. There’s some minor variation needed based on the personality of different breeds – some require lots of other dinosaur companions, others prefer solitude – but it all boils down to adding or taking away trees or laboriously moving dinos from one place to another with helicopters.

The park itself just never feels like a real place, with crowds of unconvincing visitors who swarm around the pathways but express no deep insights into what your park needs. There are no different tourist groups to appeal to, no need to balance the requirements of different demographics. They’re simply an abstract throng of stick figures, and so long as you keep adding dinosaurs and burger bars, they’ll be happy enough and the money stacks up.

Is it good for kids?

Sadly, no. In terms of content, there’s not much to worry about. When dinosaurs do escape and start snacking on guests, the tiny tourists do scramble and panic in fairly lifelike ways, which may upset more sensitive kids, but there’s no blood, and it pales alongside the brutal kills from the PG-13 movies.

Jurassic World Evolution’s obstacle for kids is that it dishes out progress grudgingly, locking away its most appealing toys – such as the gyrosphere vehicles and famous velociraptors – until you’ve slogged through dozens of hours of mundane park design and management. Often, each island follows a routine of early struggle as you make every cent count, a period of growth in which the cash pours in, and then a seemingly random moment where an invisible switch gets flipped and suddenly everything starts to go wrong for no apparent reason. That may be in keeping with the movie’s theme of chaos theory run amok, but it makes for an infuriating gameplay hurdle when you’re striving to tip your park’s rating past an arbitrary half-star benchmark, but previously well-behaved dinosaurs suddenly can’t go ten seconds without breaking out.

Most frustrating is that you can unlock the famous Isla Nublar from the original 1993 film, and it’s here you can have a completely freeform Jurassic World sandbox experience, with infinite cash and no missions to steer you along. Unfortunately, you can only ever use whatever has been unlocked on the other story-based islands, meaning you’re still going to have to plod through those to get the dinosaurs that your kids really want to play with.

And that’s the sad reality of Jurassic World Evolution. It is, at best, a game you’ll likely end up playing on behalf of your children – particularly younger kids who will be bored rigid by the endless threading of electricity pylons and futzing about with fence boundaries. Development studio Frontier is best known for Zoo Tycoon and Planet Coaster, so it can definitely deliver more entertaining theme park sims than this. Presumably the limits of the movie license have tripped the studio up.

If you can power through the gloopy porridge of the main game and open everything up, then the free play island can offer amusement. It’s a lot of work for very little reward though. In this case, life aaah didn’t uhh find a way.