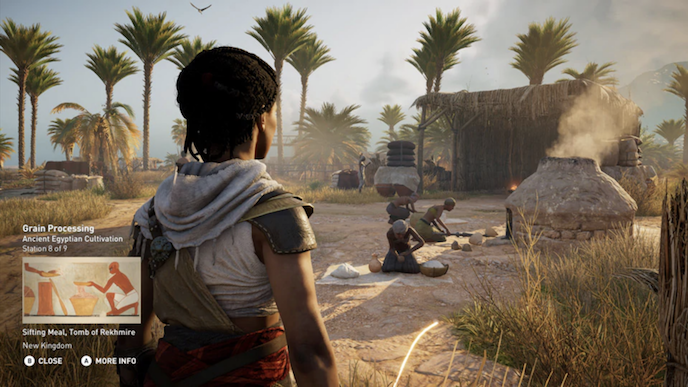 The Assassin’s Creed franchise has taken players to the Third Crusade, Imperial China, the Italian Renaissance, and many more historical time periods, but up until now, the franchise’s graphic violence has kept these games from serving as educational tools.

As reported by Variety, Discovery Tour has been used with students to teach them about Ancient Egypt, with research showing the game was only slightly less effective than a teacher at helping students learn.

For a recent study, 40 students were split into two equal groups and tested about one of the tour topics available in Discovery Tour. After the test, 20 students played through the tour in the game, while the other 20 were taught about the topic by a teacher. The students who spent time playing the game showed a 44 percent improvement in their knowledge of the subject matter, while those who were instructed by a teacher showed a 51 percent improvement.

Assassin’s Creed Origins isn’t the only mainstream video game teachers can use to help their students learn. As examples, Minecraft and Roblox, two video games that are very popular with younger players, also offer educational content for teachers to use in their classrooms.