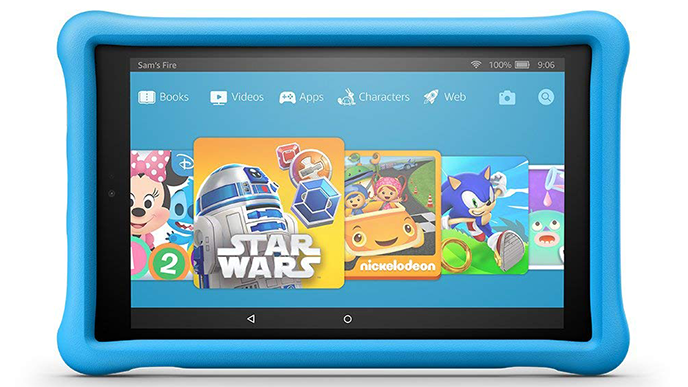 Amazon’s “Fire Kids Edition” tablets currently come in 7-inch and 8-inch models, but if you’re looking for something a bit bigger for your kiddos, Amazon has revealed a larger version of its kid-friendly tablet with a 10.1 inch screen.

As reported by TechCrunch, the Fire HD 10 Kids Edition comes with the same extras featured in the smaller versions of the Kids Edition tablets, including a heavy-duty case to protect the tablet, as well as software designed for kids and parents. It also comes with a two-year guarantee; if anything happens to the tablet in the first two years, it can be replaced for free.

In addition, the tablet includes a free, one-year subscription to Amazon’s FreeTime Unlimited service for children. The service gives kids unlimited access to thousands of kid-friendly books, shows, games, and apps. On its own, a one-year subscription to the service would cost you $83.00 if you’re an Amazon Prime member, and $119 if you’re not, so it’s a good freebie.

Amazon’s new 10-inch Kids tablet will be released on July 11 for $199.99. As TechCrunch pointed out, that’s $50 more than the standard Fire HD 10 tablet, which doesn’t come with the case or other kid-specific features. The regular Fire HD 10 also doesn’t include the free year of FreeTime Unlimited, so keep that in mind if you’re looking to pick up a new tablet for your little ones this year.