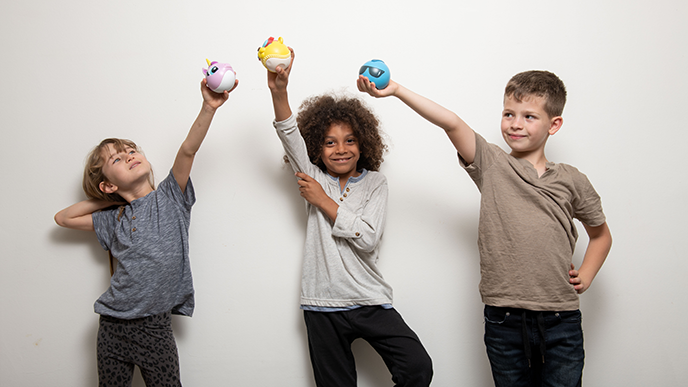 As kids spend more time in front of screens, a company called Storyball wants to inspire little ones to put away the devices and engage their imaginations in a different way.

Storyball is a smart toy that can be used as a storyteller and guide while kids play. The Storyball is a small, round ball that kids can hold in one hand, and it guides them as they play using audio, haptic (vibration), and light cues. The ball itself is plain white, but it can be covered with a variety of character skins that unlock different stories and games for kids to experience.

Right now, skins have been announced for multiple brands, including the Nickelodeon show Paw Patrol and two book series: Gunk Aliens and Magic Ballerina. Three original characters have also been created: a special agent, a bear, and a unicorn. The different skins are designed for different age groups, and offer learning activities based on concepts such as problem-solving, motor skills, and overall creativity.

Depending on the skin, kids receive different prompts as they play. For instance, they may be asked to pretend they’re jumping over a fence, or move their arm to create the shape of a rainbow. The Storyball uses AI machine learning to detect how kids are interacting with it, and will change the experience they’re playing to match.

The Storyball is about decreasing screen time, but it does require a mobile app to function. Parents can pair the Storyball with their device and then select which activity to play for the current skin. Parents can also use the app to see the topics their kids have interacted with most, as well as track their overall playtime.

This new toy is expected to launch this November, and it’s currently looking for support on Kickstarter, a crowdfunding platform that allows users to pledge money to a project to help bring it to life. Early Kickstarter backers can pre-order a single Storyball and character skin for $49. Bundles are also available that include additional skins at a higher price point.

The Storyball is the latest in a growing selection of high-tech toys for kids -- toys that add some sort of technological element to a traditional playtime experience. Combining the technology today’s kids are used to with traditional toys helps little ones stay engaged, and they may even inspire kids to get up and moving, rather than spending their time on the couch. You can’t go wrong with that.