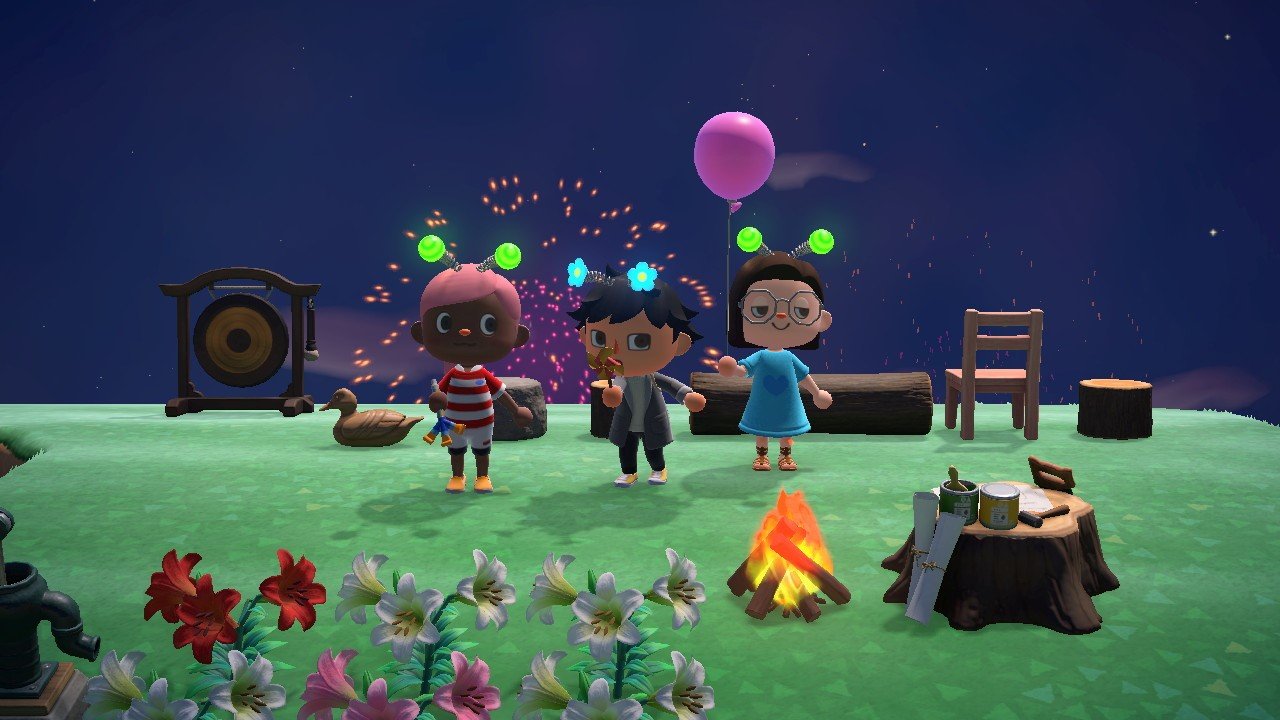 Animal Crossing: New Horizons is the gift that keeps on giving, and those of us in lockdown have probably sung its praises several times over this very tough year. Isabelle, KK Slider, and yes, even Tom Nook have become a part of the family, and while we were faced with challenges ranging from homeschooling to grocery shopping during a state lockdown, Animal Crossing has become a North Star of sorts for the family to rally around. There’s nothing like a little bit of bug catching or furniture building to rally the troops.

So when I showed my kids the promotional video for Wave 2 of the Summer Update, Harper (age 8) turned on her Switch even though the update wasn’t coming for a couple of days. She told me she was getting ready. Little did I know what she had in store for me and my youngest, Charlotte (age 6).

Here is a small family photo album of our adventures during the inaugural fireworks show on Firespace, Harper’s island in New Horizons.

Upon landing, our first stop was town hall. It was packed! It seemed like everyone from the island was there, looking at the beautiful fireworks going off. All those bells that we pay Tom Nook were finally coming back to us in the form of these colorful displays.

Isabelle gave us each a welcome gift of fun glow-in-the-dark antennas that we would wear throughout the night. I also went to speak to Redd, who was offering a raffle ticket for 500 Bells. Seemed like a great deal because we were winning every time!

Before heading to Harper’s surprise, we stuck around the town center and used some red sparklers to mark the occasion. Amongst the goodies we won at Redd’s raffle were balloons, fans, pinwheels, fountain fireworks, bubble blowers, and tweeters.

Some of the island villagers would even gather to enjoy the fountain fireworks we put down, making for quite the introduction!

Now it was time to head to Harper’s surprise: it was a special overlook she created with custom furniture and decorations made just for the occasion. There were beautiful flowers planted, a gong to hit whenever you saw a firework you liked, and a variety of seats. Very cute!

After admiring the special area she built for the occasion, we enjoyed the different fireworks on display. We’re not sure of the names: there was the long-lasting one, the colorful purple one, and the flashy scattershot one. Doesn’t matter, they were all great.

Harper then invited us to her place for pizza. “Pizza?,” Charlotte asked. Sure enough, once we got to Harp’s place, we saw a huge brick oven she had just built. She’s been busy!

And for those of us who didn’t like pizza (?!), Charlotte was taking care of the backyard BBQ. Delicious!

We then let our enthusiasm get the best of us and donned our swimsuits for a swim under the fireworks. Cannonball!

They say you should never swim right after eating or you’ll cramp up, and that’s what happened. So we then went indoors and spent some time recovering by checking out Harper’s new expansion. Tennis is on TV! Live sports are back baby!

We spent some time just hanging out together under the booming, brilliant fireworks fishing and playing tag (with our nets), and just having fun. We’re already planning next week’s special event, this time on Charlotte’s island to see what she has in store for us.

Animal Crossing: New Horizons continues to bring the fun, and its summer update was just what was needed for families that want and need to play it safer this year. Enjoy the fireworks shows every Sunday in August starting at 7 p.m. local time, and be sure to stop by Town Hall for your goodies and raffle prizes!