Pokemon TCG: This 8-Year-Old Pro Shares What He Loves About the Game 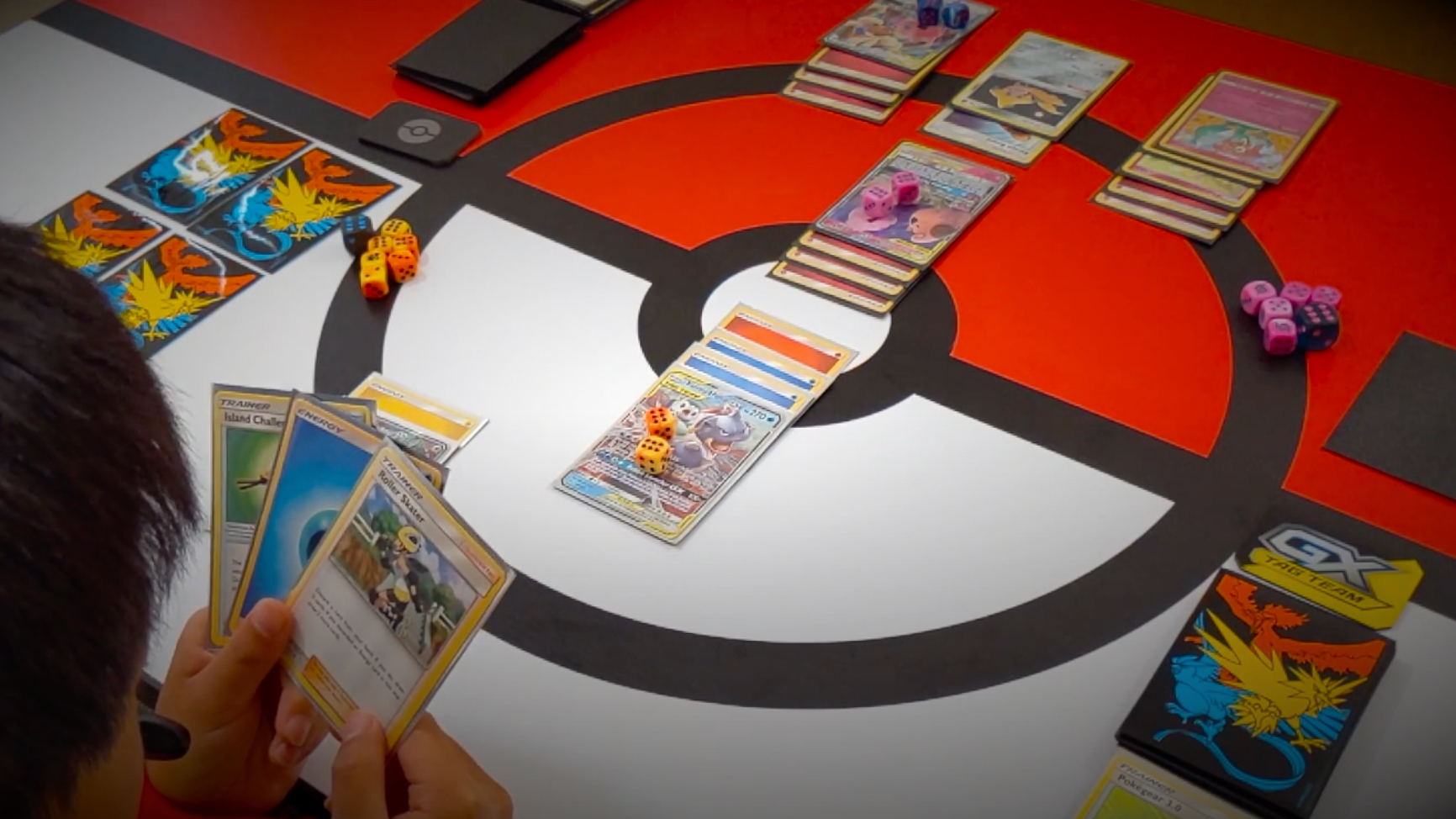 One of the best things about the Pokemon universe is that it appeals to fans of so many different ages, and with so many different tastes. If you’re into watching cartoons, there’s a long-running series to watch on TV and streaming services. Love video games? There are plenty of those. Into trading cards? You can collect thousands.

We recently had the chance to chat with a young Pokemon fan named Edison C. and his dad, Jason. Edison is a name to watch in the competitive Pokemon Trading Card Game (TCG) circuit. He’s currently ranked No. 22 on the U.S. Pokemon TCG Junior Division Leaderboard, and he has his own YouTube channel (Trainer PoMa) where he shares vlog-style content, unboxings, and more. He’s also only 8 years old.

We wanted to learn more about Edison’s love of the Pokemon TCG, his YouTube channel, and how Jason manages his son’s gameplay time. You can check out the full interview below.

SuperParent: How long has Edison been playing the Pokemon TCG?

Jason - Edison (aka Trainer PoMa) started to play Pokemon TCG about a year ago. He threw a Pokemon-themed birthday party at a local gaming shop in Seattle, which happened to have a Pokemon League Challenge tournament at the same time. So I got Edison a theme deck to learn how to play the game. Somehow he beat out five other Junior (age 11 and under) players and came in first place. After winning some booster packs and promo cards, the rest is history.

Edison - I had a birthday party at Mox Boarding House and there was a Pokemon tournament and my dad got me a theme deck for the tournament. I didn’t even know how to play and won first place! Crazy! So that is how I started playing Pokemon TCG.

SP: Is anyone else in the family also interested in Pokemon? How did Edison discover this franchise?

Jason - Everyone in this household is a gamer. I've been working in the games industry for almost 30 years (since 1992), so gaming is a much encouraged activity. I remember spending countless hours on Pokemon Red on my Game Boy Color. When I met my wife, we played a great deal of Pokemon Diamond & Pearl on the Nintendo DS.

Edison's first Pokemon experience was Pokemon GO. He was only 4 at the time. And when he discovered Pokemon TCG, I'd say it was love at first sight. His sister, Zelda, also loves Pokemon, especially the cute ones like Eevee. But I think her favorite right now is Scorbunny thanks to Pokemon Journey on Netflix.

For holidays 2018, before Edison's TCG craze, we took a "Pokecation" to Japan and did everything Pokemon - dined at the Pokemon Cafe, shopped at the Pokemon Center, did raids in Pokemon GO, collected Pokemon capsule toys, you name it. That was a fond memory.

Edison - My Sister (aka PoMakitty) - she loves the Pokemon Scorbunny. She loves it because it’s cute. I discovered Pokemon TCG by playing Pokemon Go and when we were in Japan we went to the Pokemon Cafe and Center. Then when we came back to the U.S. I began to play Pokemon TCG.

SP: Whose idea was it to create a YouTube channel?

Jason - It was a team decision. Edison wanted more Pokemon TCG content on YouTube, but I really dislike unboxing videos that just go through booster packs after booster packs. And the tournament-related videos were a bit too advanced for new players like us. So we decided to make a docuseries on Edison's attempt to go to the World Championship in London. We thought having him dream about winning the World Championship would be funny. Then we spent over a month making that very first video.

Honestly we didn't know he'd actually become a pretty decent player. Before COVID-19 cancelled the 2020 tournament series, within the Junior Division (age 11 and under), Edison was ranked 10th for the European International qualification period and 24th overall for the World Championship. So he might actually have a shot at realizing the fictional dream. Unfortunately, [the 2020 Championship] is cancelled so we'd have to try again next year.

For the YouTube channel, we tried to have fun while being informative as well. Some of our best received clips were the How To series. And for our loyal viewers, they always enjoyed the little "Easter egg" at the end of each video.

Edison - It was a team decision. But my dad did not like videos that don’t teach you anything. So my dad asked me about making a channel and I said sure. Now we have 76 subscribers and our first video took about a month. We have 23 likes and over 700 views in the first video. SP:

SP: Becoming a “professional” at any activity takes a lot of work and time. How do you manage Edison’s gameplay time and expectations, and what advice would you give to other parents of aspiring “professional gamers?”

Jason - First and foremost, Pokemon TCG is a fun activity and we enjoy every moment of it. So it never felt like "work". Edison's math, reading, and logic all improved a great deal since he started playing the game. And once he started to compete at tournaments, he began to develop skills like respecting others, handling losses, learning from mistakes, negotiating fair trades, and etc. So as a parent, I think Pokemon TCG is a great hobby for kids like Edison.

Fortunately, the Pokemon TCG community is also extremely family friendly. We wouldn't have gone this far without help from other players and families. Many of the Masters (adult players) routinely play with Edison and offer their tips and advice. Some even lent Edison decks and cards so he could play out his strategies.

When the tournament was in full swing, we spent about an hour each weekday learning new cards and practicing against different decks. Weekends were all about tournaments and making YouTube videos. Competing in 2 tournaments a day is not uncommon. A typical tournament takes about 2-3 hours. And the furthest we've driven was 80 miles each way.

For fellow parents, I'd say support your aspiring professional gamers with your time. Learn the game with them. Play and practice with them. Take them to tournaments so they can also learn from others. Have fun together. But most importantly, let them do their thing. I used to watch every game Edison plays just so I could note down misplays for future improvements. Then I realized I was just making him play the game my way. Nowadays I just sit back, try to get a head start on the next YouTube video, and let him do his thing. Next thing I know Edison was beating me with tricks that I've never seen before! That little bugger.

SP: Which Pokemon is your favorite?

Edison & Jason - My favorite Pokemon is Ditto. It can transform and become anything - people, objects, and even other Pokemon. So it is probably the most powerful Pokemon out there. But if a Ditto tries to transform into something based on its memory, then it may not be accurate. So you could end up with a Charizard with Gyrados' tail and Venusaur's bulb. Then that'd be hahahaha funny. Lastly, Ditto is so simple looking, I can draw it in less than 5 seconds!

SP: Which Pokemon card do you like the most and why?

Edison & Jason - There are so many good Pokemon cards out there. I think my favorite is Cramorant V from the new Sword and Shield set. It is colorless, so you can attach any type of Energy onto it. It can KO (knock out) a benched Dedenne-GX with a single Spit Shot attack. Because virtually everybody plays with Dedenne-GX, this is an easy way to take 2 prize cards. Also, at the start of the match, you can use the Beak Catch attack to find two cards from your deck. Any cards. So you can set up your match very early.

SP: Do you have any tips for other Pokemon TCG players that may help them become better at the game?

Edison & Jason - Before any tournaments, study your deck and other popular decks out there. Practice at home with proxy decks or play Pokemon Trading Card Game Online. Proxy decks are DIY decks that you can print and construct at home. During the matches, focus on the game and pay attention. Try to figure out what your opponent plans to do. Keep track of what's in their discard pile and what's in your draw pile. And when you are falling behind, don't give up. There are many ways a game can go. Next thing you know you might just draw the card you need to win the game!

To keep up with Edison’s adventures in the world of the Pokemon TCG, head over to his YouTube channel.