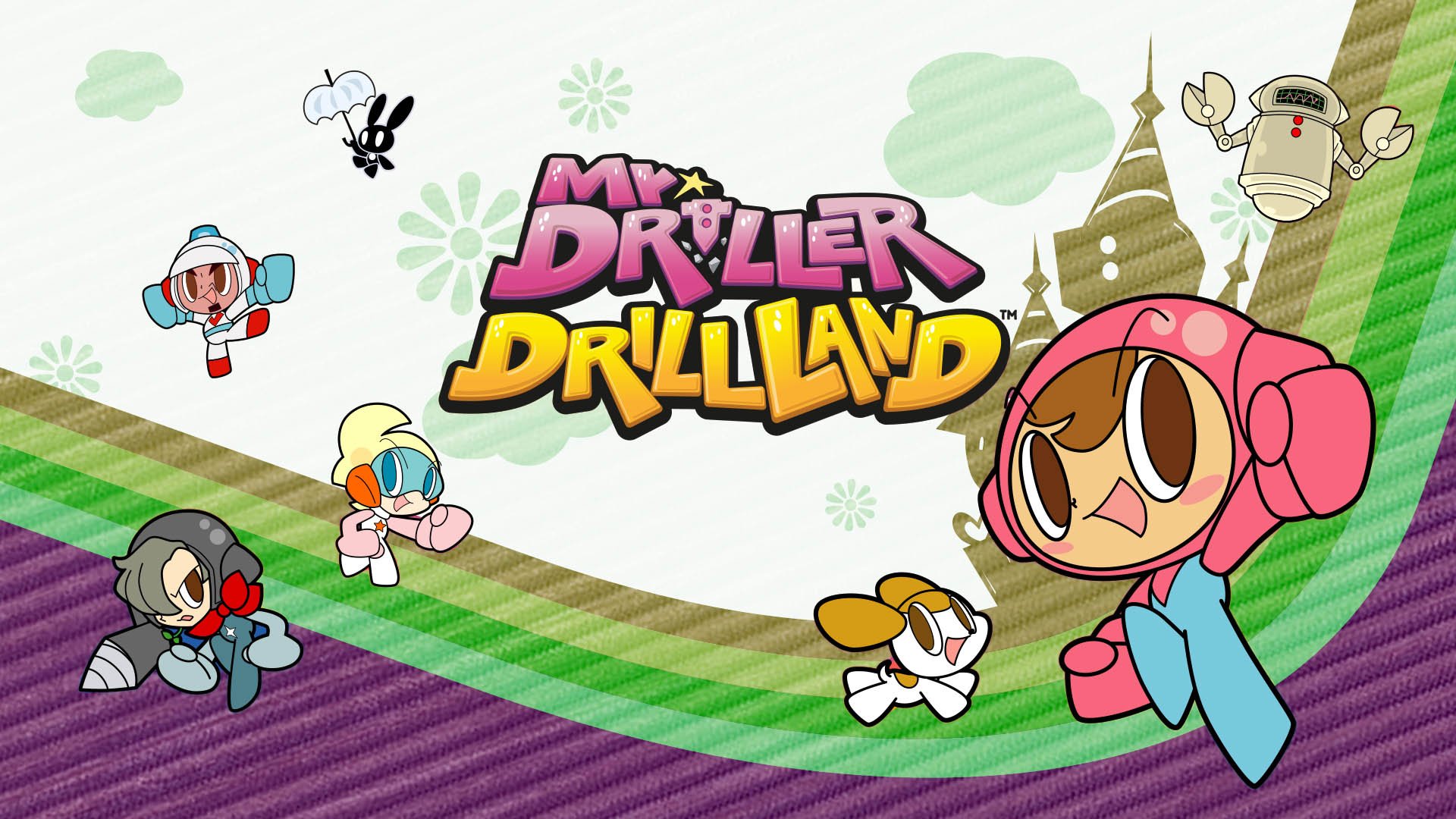 Mr. Driller DrillLand is a puzzle action game from Bandai Namco that’s available on Switch and PC. The game is based on the original Mr. Driller Drill Land video game that was released on GameCube in Japan in 2002.

We had a chance to check out Mr. Driller DrillLand on Switch.

In Mr. Driller DrillLand, you’ll travel to an amusement park located 500 meters underground, where you can complete five different attractions that ask you to dig through blocks, defeat bosses, and more.

In addition to this story mode, you can also challenge friends or family members in the same room to an online match in two modes: Race and Battle.

In the game’s story mode, there are five main attractions to complete, along with a final mini-game. All of them have the same basic gameplay, in that they’ll ask you to dig through colorful blocks to complete goals. However, each attraction also has different specific rules, objectives, and limitations.

At the beginning of each attraction, you’ll start at the top of a large mine full of blocks of different colors. You can drill through these blocks to head deeper into the mine, where you may find enemies to defeat, crystals to collect, and more, depending on the attraction.

Here’s a summary of the five attractions, so you have a better idea of what to expect going in.

The Hole of Druaga - This attraction asks you to make your way through multiple screens until you find a key that can be used to open a boss door. Then, use special crystals (which you should also collect as you work to find the key) to damage and defeat the boss. In this mode, you have a limited amount of health, or hit points, and each time you dig into a rock, you lose one hit point. The attraction is also filled with enemies that will attempt to attack you if you get too close. As you dig or take damage from falling blocks and/or enemies, you can collect potions and crystals to recover some of your health. This is one of the game’s most strategic attractions. Since there is no time limit, you can take your time and think ahead before making moves.

You can see a playthrough of this attraction from beginning to end in our video below.

World Drill Tour - In this attraction, you need to reach a depth of 500 meters before running out of air. Your oxygen level will deplete automatically over time, and you can collect air capsules to refill the tank. If you get hit by a falling block or run out of air, you’ll lose a life. If you lose all of your lives, it’s game over and you’ll need to start the attraction from scratch.

Star Driller - Similar to the World Drill Tour attraction, this one asks you to reach a depth of 500 meters before running out of air. You can collect air capsules to recharge your oxygen level, which will automatically deplete over time. If you run out of oxygen, you’ll lose a life, and if you run out of lives, you’ll need to start over from the beginning. In this mode, the board contains “?” blocks that you can touch in order to trigger an unknown effect on the game. That is, you won’t know what will happen until you touch the block, and the effect may be positive or negative.

Drindy Adventure - Inspired by Indiana Jones, this attraction (pictured above) asks you to collect a required number of Golden Statues and then reach the exit. The board is filled with traps, including spikes and rolling boulders. If you cause the blocks surrounding a boulder to disappear, the rock will roll around the board for a few moments before eventually disappearing. If you get hit by a boulder, you’ll lose a life. Run out of lives and you’ll need to start over from the beginning of the attraction.

Horror Night House - In Horror Night House, you must collect the required number of “Drystals” to move through multiple floors and eventually beat the attraction. Ghosts will randomly move around inside the blocks on the screen, and you can grab and use holy water to turn them into the Drystals you need to collect. If you dig into a block or set of blocks that currently has a ghost in it (without using holy water first), you’ll be attacked and will lose some health points. You can recover health by collecting heart crystals as you play. Or, if you run out of health, you’ll lose the game and will need to start over from the beginning.

You can choose from two difficulty levels when entering the game’s Story Mode: Casual and Classic. The Casual mode is the easier of the two, while the Classic mode has “the same level of difficulty” as the original Mr. Driller Drill Land GameCube game. You can replay attractions as many times as you want, and once you’ve finished the story (it’s very short), you can keep playing on the same save file and try out more challenging versions of each game.

Finally, as you play, you’ll collect “Bits,” the game’s currency, which can be spent on things like virtual theme park souvenirs and boosters that can help you complete attractions.

How do the multiplayer modes work?

Both multiplayer modes support two to four players on the same device.

In the Race mode, players work to be the first player to reach a depth of 500 meters. Each player has their own board and section of the screen to look at. The gameplay here is very similar to that of the Star Driller attraction in the single-player mode, since you can touch blocks that cause special effects to appear on the boards.

In the Battle mode, players are challenged to be the first to find a hidden medal on a large, stationary board. When you’re close to the hidden medal, your controller will vibrate. The first player to collect three medals in total wins.

While all of the game’s modes are fun, some are more challenging than others. Specifically, we found the Drindy Adventure attraction to be the most challenging, since you really need to pay attention to where you’re going in order to avoid getting hit by a boulder. In our opinion, The Hole of Druaga is the most enjoyable game, since it’s more about strategic movement and exploration than fast-paced gameplay (which can sometimes become stressful). But again, we enjoyed our time with both the single-player and multiplayer game modes, and there's enough variety here that most players shoould be able to find a mode that suits their tastes.

Mr. Driller DrillLand has Japanese voice acting, which is accompanied by English subtitles. This means players need to know how to read to keep up with the story. Furthermore, the game doesn’t include a traditional tutorial for any of its attractions. Instead, you’re presented with a general list of rules and requirements that you’ll need to read before you begin.

In addition, since this game is part of a larger “Mr. Driller” video game franchise, it makes assumptions about how much you know about the characters and villains in the game’s universe. If this is your first Mr. Driller game, you may not catch certain references in the story. However, the amusement park has a DrillLand Library that you can visit to learn more about the in-game lore. Plus, the story is pretty light to begin with, so not having previous knowledge won’t ruin the experience.

Mr. Driller DrillLand is a happy and fun game that contains lots of unique variations on a simple gameplay formula. While some mini-games are more difficult than others (and arguably more or less enjoyable), the variety here (and limitless replayability) is definitely appreciated.

If your family enjoys games like Tetris or Puyo Puyo Champions, this is a great game to check out next.

Mr. Driller DrillLand is available for $29.99 on Switch and PC. The game is rated E for Everyone by the ESRB.

Disclosure: Bandai Namco gave SuperParent a code for this game for coverage purposes.