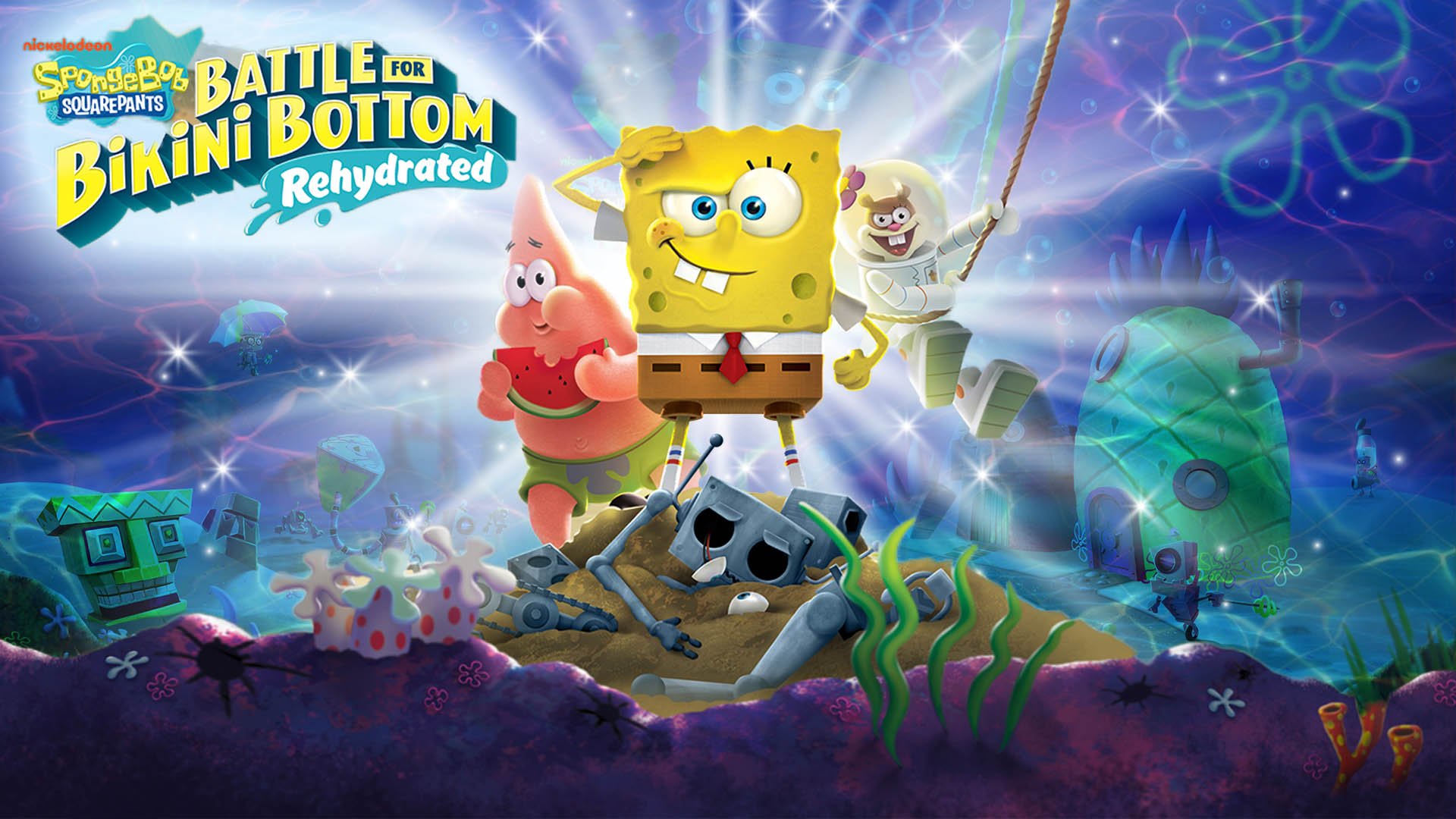 SpongeBob SquarePants: Battle for Bikini Bottom was originally released on PlayStation 2, Xbox, and GameCube in 2003. Now, the game has been re-released for Switch, PlayStation 4, Xbox One, and PC as SpongeBob SquarePants: Battle for Bikini Bottom Rehydrated. This new release features updated graphics, as well as new content that wasn’t seen in the original version of the game.

We had a chance to check out the Switch version of Battle for Bikini Bottom Rehydrated.

In Battle for Bikini Bottom Rehydrated, Plankton inadvertently unleashes an army of robots on Bikini Bottom during a failed attempt to steal the Krabby Patty secret formula. Now, it’s up to SpongeBob, Patrick, and Sandy to stop the robot army and save Bikini Bottom.

Battle for Bikini Bottom Rehydrated is a 3D platformer, similar in style to games like Spyro Reignited Trilogy and Ice Age: Scratt’s Nutty Adventure. You’ll start out controlling SpongeBob, and you’ll unlock access to Patrick and Sandy as you play.

You’ll be able to explore multiple areas around Bikini Bottom, including SpongeBob’s neighborhood, Goo Lagoon, Jellyfish Fields, the Mermalair, and more. Each of these overall “zones” is split into multiple areas, which each have a main objective to complete (typically reach the end of the area), as well as smaller, optional goals to finish.

As you complete these areas and objectives, you’ll collect golden spatulas, which you’ll need to gather in bulk to unlock additional locations to explore.

Each area is also filled with colorful “shiny objects” that you can collect, which serve as the game’s currency. You can spend this money to do things like open doors and rebuild broken objects (like a broken bridge). The world also has lots of tikis that you can break to collect extra shiny objects, a variety of robots that you can defeat (or avoid), and hidden collectibles that you can gather.

SpongeBob, Patrick, and Sandy each have different skills, and you’ll need to switch back and forth between these characters multiple times to clear every area of the game. For instance, SpongeBob can launch himself upwards to hit tikis or buttons that are floating in the air, Patrick can pick up large melons and throw them at enemies or buttons, and Sandy can use a lasso to hover and clear large gaps between platforms (among others skills for each character).

You’ll also unlock additional skills as you make your way through the game. Once you unlock certain skills, you can revisit past areas where these skills are required to collect golden spatulas. The game includes a fast-travel feature so you can quickly jump to another area that you’ve previously visited.

Finally, if your character is hit by a robot or touches a dangerous obstacle (like a jellyfish), they’ll lose a pair of underwear, which represent their health. You can heal your characters by collecting more underwear that are scattered frequently throughout each environment. Or, if your character loses all of their underwear, they’ll pass out and you’ll need to try again from a previous checkpoint.

Rehydrated is a fun game, but it's also sometimes challenging. Even adults will likely have some difficulty collecting all of the golden spatulas throughout the entire game, and there are some environments that are more difficult to complete than others. For instance, some have a large number of enemies in a small area, while others may require careful jumping to clear gaps and obstacles.

There is no actual “lives” system here, so players can keep trying as many times as they need to clear an area or defeat a boss.

Does the game have any problems?

Thankfully, SpongeBob SquarePants: Battle for Bikini Bottom Rehydrated includes voice acting, with most (but not all) of the characters being voiced by the actors from the television show. That being said, if you decide to use subtitles, they don’t progress automatically along with the voice acting, so younger players may get lost as they try to read along.

We would also love it if SpongeBob, Patrick, and Sandy walked faster, but that’s a nitpick on our part.

Rehydrated includes a multiplayer mode that wasn’t found in the original version of the game. It lets two players work together to defeat Robo-Squidward by taking out many (too many) waves of enemies.

This multiplayer mode allows two players in the same room to work together on the same screen, or one player can team up with another person online.

Unfortunately, this mode is really repetitive, and it drags on for far too long (by the end, we were really ready to be done). In addition, if you’re playing with someone in the same room (that is, on the same screen), the camera will zoom in and out as you get closer together or farther apart in the in-game world, respectively. Unless you stick close to your teammate, the camera will zoom out, and, by the end of the game, it can be difficult to even see where your character is among the overabundance of enemies and projectiles on the screen.

Having a multiplayer mode is better than not including one at all, but this isn’t where the game shines.

SpongeBob SquarePants: Battle for Bikini Bottom Rehydrated is a fun platformer that both kids and adults can enjoy, even if they have no experience with the original release. That being said, the game isn’t really easy, so younger players may look for help clearing difficult areas. In addition, the multiplayer mode can easily be overlooked and you won’t miss out on much.

Since it includes optional collectibles and lots of golden spatulas to collect, the game provides a good value for the money, especially considering that it isn’t a full-priced release (in the world of video games, that would be a game costing $59.99).

If your family enjoys franchises like Spyro the Dragon, Skylanders, and Crash Bandicoot, give this one a look.

SpongeBob SquarePants: Battle for Bikini Bottom Rehydrated is available on Switch, PlayStation 4, Xbox One, and PC for $29.99. The game is rated E10+ for Everyone 10+ by the ESRB.

Disclosure: THQ Nordic gave SuperParent a code for this game for coverage purposes.