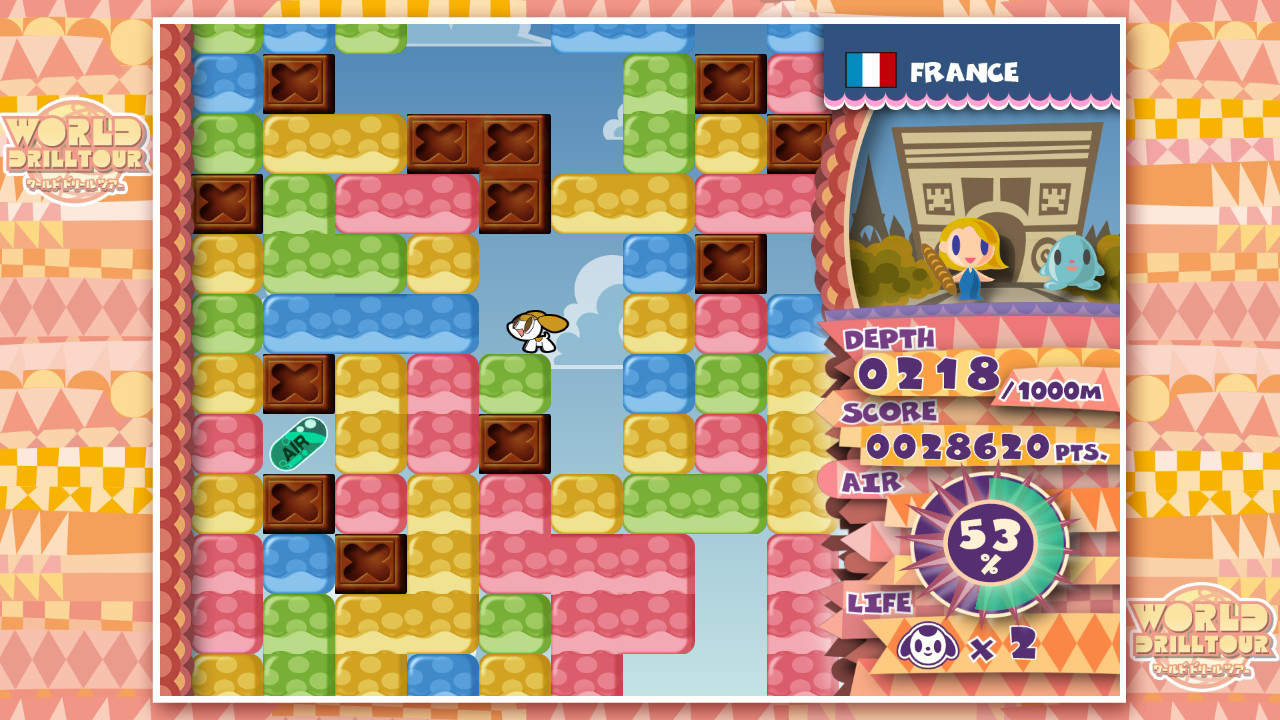 Mr. Driller DrillLand is an action-puzzle game for Switch and PC. The game is based on the original Mr. Driller Drill Land video game that was released on GameCube in Japan in 2002.

In Mr. Driller DrillLand, you’ll travel to an amusement park located 500 meters underground, where you can complete five different attractions that ask you to dig through blocks, defeat bosses, and more.

Each attraction presents you with a different set of specific rules and limitations, but the general gameplay is the same across them all. The game also has multiple playable characters to choose from, though you may be limited in the characters you can choose depending on the attraction.

At the beginning of each attraction, you’ll start at the top of a large mine full of blocks of different colors. You can drill through these blocks to head deeper into the mine, where you may find enemies to defeat, gems to collect, and more, depending on the attraction.

Each level has some sort of “health” or “air” limitation that forces you to use strategy as you dig. For instance, one stage may ask you to reach a depth of 500 meters before running out of air. In this stage, your oxygen level will constantly deplete, but you can pick up air capsules to restore a bit of air and continue playing. Even so, this level still has a relatively fast pace.

In another stage, you may lose health points when you drill through blocks. However, you won’t lose health if you’re just standing still. This means you can take your time and really think about each move before you make it. You can also collect potions and gems in this stage that will allow you to replenish your health.

As you dig, you’ll need to watch out for obstacle blocks that require more effort to clear, as well as falling blocks that can damage your character (you’ll frequently cause blocks to fall by drilling through the ones underneath them).

Finally, as well as a single-player mode, Mr. Driller DrillLand has two multiplayer modes (Race and Battle) that support up to four players.

Mr. Driller DrillLand is available to download on Switch and PC for $29.99. The game is rated E for Everyone by the ESRB. While the content here is family-friendly, players will need to know how to read to keep up with the game’s story and instructions.

Check out 19 minutes of Mr. Driller DrillLand gameplay in our SuperParent First Look below, and keep checking back with SuperParent, as we’ll share our full review of the game in the coming days.

Disclosure: Bandai Namco gave SuperParent a code for this game for coverage purposes.