Battle Royale Drops Into The Real-World With This Mobile App 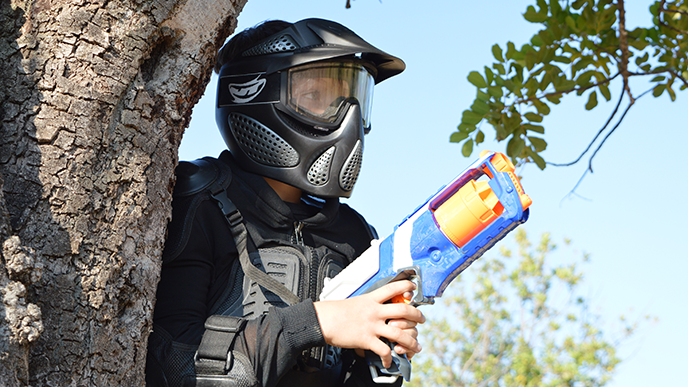 Fortnite and PlayerUnknown’s Battlegrounds (or PUBG) are some of the biggest games in the world among teens and adults, but their popularity means players are often glued to their screens for hours on end. What’s a parent to do when they want their kids to leave the game behind and spend some time outdoors?

Battle Royale IRL is a potential solution. The new mobile application lets users create their own battle royale games using the GPS technology in their phones. If you’re not familiar, battle royale video games like Fortnite place a bunch of players into a large open arena and challenge them to be the last one standing. Typically, each match contains a safe zone that shrinks over time, forcing players into closer proximity to one another to increase the action and ensure the match ends in a timely fashion. Players who stay outside the safe zone will take damage until they’re eventually eliminated.

Here’s how the real world version works. Players start by inviting their friends to play and selecting the designated play area. This can be anything from a large backyard or park to a paintball field. From there, the app will randomly generate the shrinking safe zone, as well as the outer circle that players need to avoid. If a player stands outside the safe zone for too long, they’re removed from the game.

Since Battle Royale IRL only creates the playing field, the rest of the game can be customized by each group of players. For instance, if a group of teens decides to compete with paintball guns, they’ll need to decide how many times someone can get hit before they’re eliminated.

While Battle Royale IRL is advertised as being perfect for NERF gun, airsoft, and paintball fights, the experience can also be customized for younger players by using things like water balloons and goblies instead. In these cases, where each player may not have their own device, an adult may need to stand on the battlefield to let kids know where the safe zone is.

If you want to give Battle Royale IRL a try, the app can be downloaded for free on iOS. It will be released on Android devices in the future.