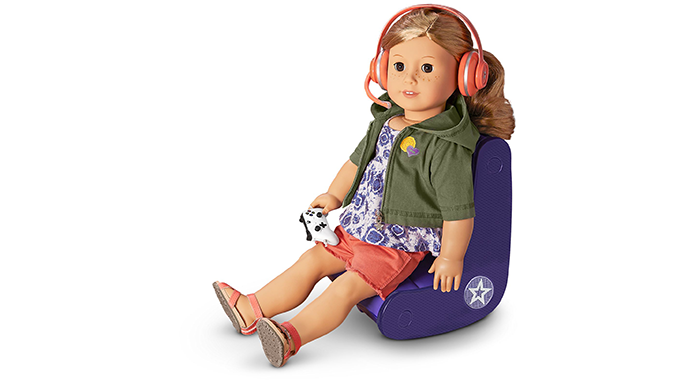 American Girl’s line of luxury dolls celebrates diversity and representation with multiple skin tones and appearances to choose from. It also offers a variety of accessory kits, so kids can customize their doll’s personality and hobbies to match their own interests (or create characters of their own).

There are accessories that allow dolls to become astronauts, builders, skateboarders, and more. Now, IGN spotted the company’s newest accessory kit, which focuses on a pretty specific hobby: playing video games on an Xbox One S.

The $50 Xbox Gaming Set includes a pretend Xbox One S console that doubles as a projector, kind of like a View-Master, but for a modern audience. It comes with two discs, each of which contains five different “gaming scenes” that can be projected.

The set also includes a doll-sized wireless gaming headset, two mock game cases to hold the projector’s discs, a small, pretend Xbox One S controller that the dolls can actually hold, and a faux-leather gaming chair that functions as a real speaker. Seriously, you can plug the speaker into a device to play music.

The kit doesn’t include a doll, and there’s nothing saying your kids have to own an American Girl doll to have some fun. Find a doll that’s roughly the same size (14-18 inches), and you’re good to go.

American Girl dolls are expensive toys, but if you snag one of the highest valued dolls, these are rare collector’s items that could be boxed away for future resale (or for nieces/nephews or future grandkids). The $50 Xbox Gaming Set is a steep price to pay, but just like Barbie has gotten into the whole gaming trend, it’s nice to see American Girl acknowledging games a hobby.