Back to the Future Board Games: A SuperParent Hands On 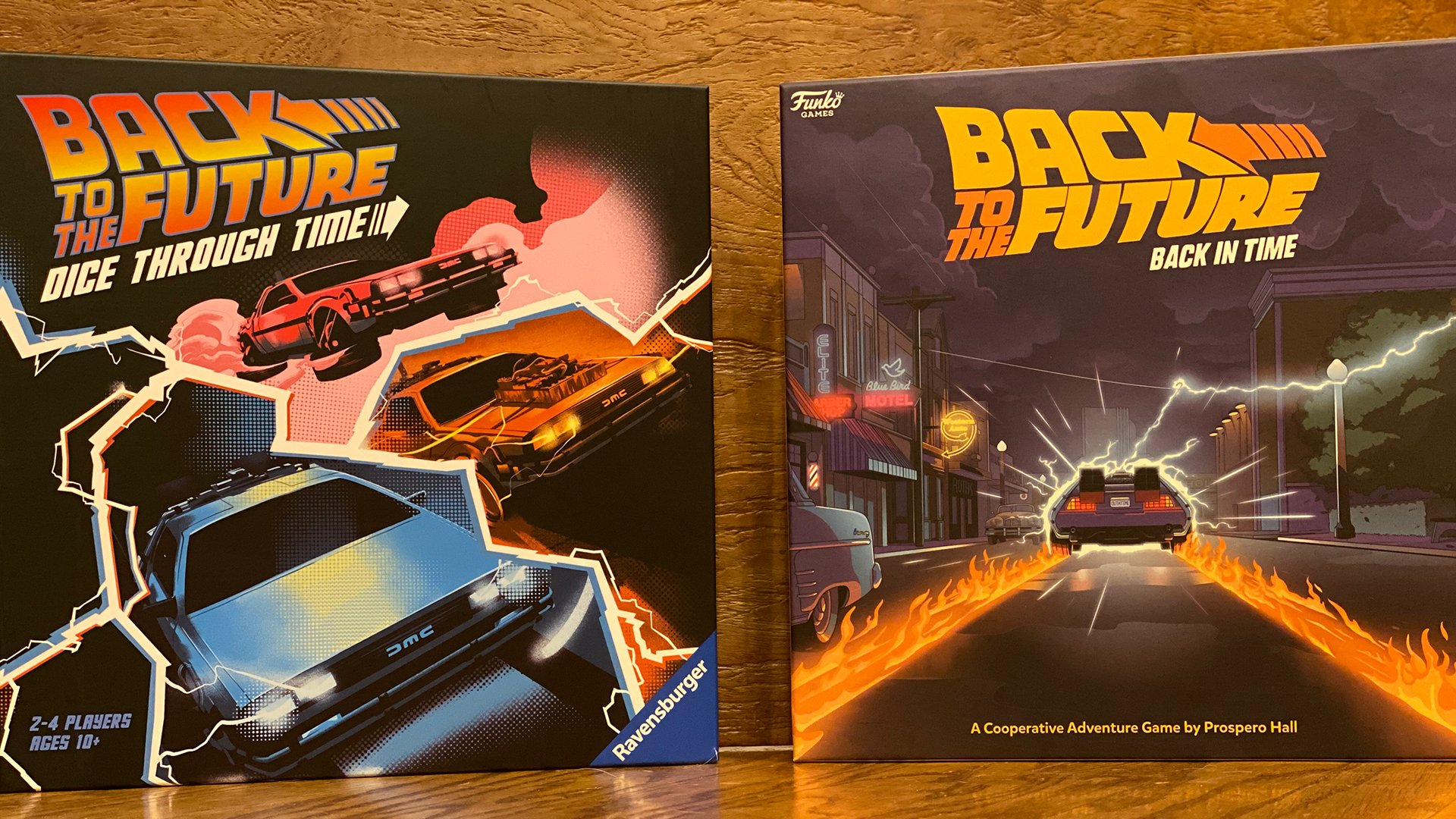 Great Scott! TWO new Back to the Future board games are hitting store shelves just in time for the movie’s 35th anniversary! Did we create alternate timelines -- or are we just lucky enough to get two great, different takes on this fun franchise dropping this June? We’re going to give you a quick walkthrough of Funko Games’ Back To The Future: Back in Time and Ravensburger’s Back To The Future: Dice Through Time.

So buckle up. Where we’re going, we don’t need roads -- but you will need to clear off some room on your table.

In this cooperative adventure board game, you are driven back to Hill Valley, 1955. You’re playing the parts of Doc and Marty, of course, but for a full 4-player game, Jennifer (Marty’s Girlfriend) and Einstein (Doc’s dog) can also come along for the ride. The overall plot remains the same:

What unfolds here while you’re playing is a fun-but-time-pressured game that captures the seminal movie’s highlights. As turns tick away and you’re attempting to return to 1985, there’s a lot of fun gameplay nods on the board. Namely, the McFly family photo that’s actually an element of the game. The longer you take, the greater the risk of wiping yourself out of the picture as you flip over tiles.

As you can see from the pictures here, a lot of detail went into BTTF: Back in Time. From the instruction manual and overall fantastic presentation to the 3D clock tower that serves as a dice roller. Seven 3D plastic character movers pop out on the city streets and a proper painted DeLorean makes its way through the city.

If you’d rather play the adventure than watch a rerun, this game is definitely worth a roll of the dice.

Here’s the setup: Biff stole the DeLorean and has been tearing his way through the timestream. Events got scrambled far worse than the “Biff-verse” version of 1985 (as seen in Back To The Future Part II). Now, it’s up to Marty and Doc Brown to correct all the time paradoxes happening at the same time. To do that, you must work with other players in different times, complete events, and return items to where they belong.

A big part of BTTF: Dice Through Time is collaborating with other players so that you’re ferrying missing items back and forth and working together to undo the time paradoxes that crop up during a game. Also, I have to point out that I like that this game gives the oldest player (“The one who has to go the furthest back in time”) the first move. In other words, I’m old.

Of course, a game about time travel wouldn’t be complete without some time pressure to win. The time tracker ticks toward universal oblivion. If you can’t undo Biff’s screw-ups, time unravels. So, no pressure.

The artwork here is clean and captures the vibe of the movies while making the timestream cards pop. The stylized cardboard standees make the Tannens from every era jump off the board. There’s even a small, color-coded DeLorean for each stretch of time on the game board. I should point out, though, that by having monotone-colored cars matching their year, they disappear into the board until you start placing down cards.

Now for the real question…

Are these games appropriate for my kid?

Your...well...mileage may vary. My kid wouldn’t get it yet. He’s not old enough to get a lot of what’s happening and he doesn’t even understand the significance of a DeLorean! That last bit is probably a parental failing on my part, though.

Anyone - of any age - that appreciates the franchise is going to get a lot out of both of these games for different reasons. Better still, both play up the need for teamwork to tackle bigger problems - a core tenet of all the movies. Whether you want to replay the adventure of the first movie - or want a new twist on juggling timelines - both bring different flavors of time travel to your table.

Disclosure: SuperParent received these games from the publishers for coverage purposes.