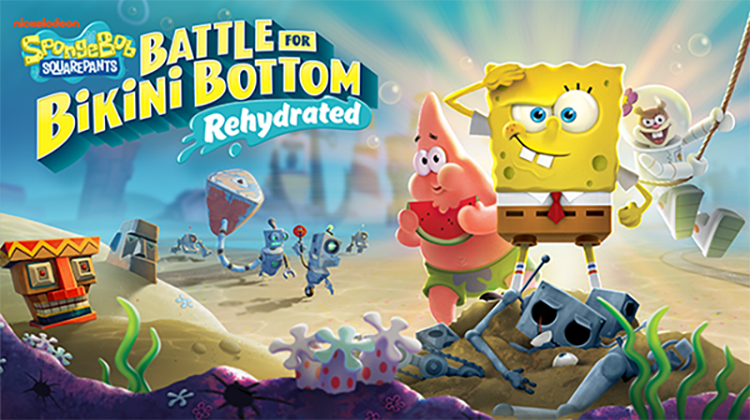 In SpongeBob SquarePants: Battle for Bikini Bottom - Rehydrated, players will need to help SpongeBob and his friends save Bikini Bottom from robots. This 3D platformer (think games like Skylanders: Trap Team or Spyro Reignited Trilogy) will allow you to play as SpongeBob, Patrick, and Sandy as you progress through the game.

Rehydrated will feature updated graphics and gameplay, including new multiplayer functionality. The game is set to hit Switch, PlayStation 4, Xbox One, and PC on June 23, 2020.

You can now pre-order the physical version of SpongeBob SquarePants: Battle for Bikini Bottom - Rehydrated at Amazon, GameStop, and Best Buy. You can also pre-order the game digitally on Xbox One and PC. Digital Switch pre-orders will be available starting on April 21, 2020. The game is priced at $29.99. It's been rated E10+ for Everyone 10+ by the ESRB.

In addition, you also have the option to pre-order two special editions of the game, which include the game, along with extra goodies.

The F.U.N. Edition is more expensive, at $299.99. This special edition includes everything found in the Shiny Edition, as well as a 7” Patrick figure, an 8” Sandy figure, and a set of five “Tiki Keyrings.”

Are you excited to play SpongeBob SquarePants: Battle for Bikini Bottom - Rehydrated? Let us know in the comments, or tweet us at @superparenthq.