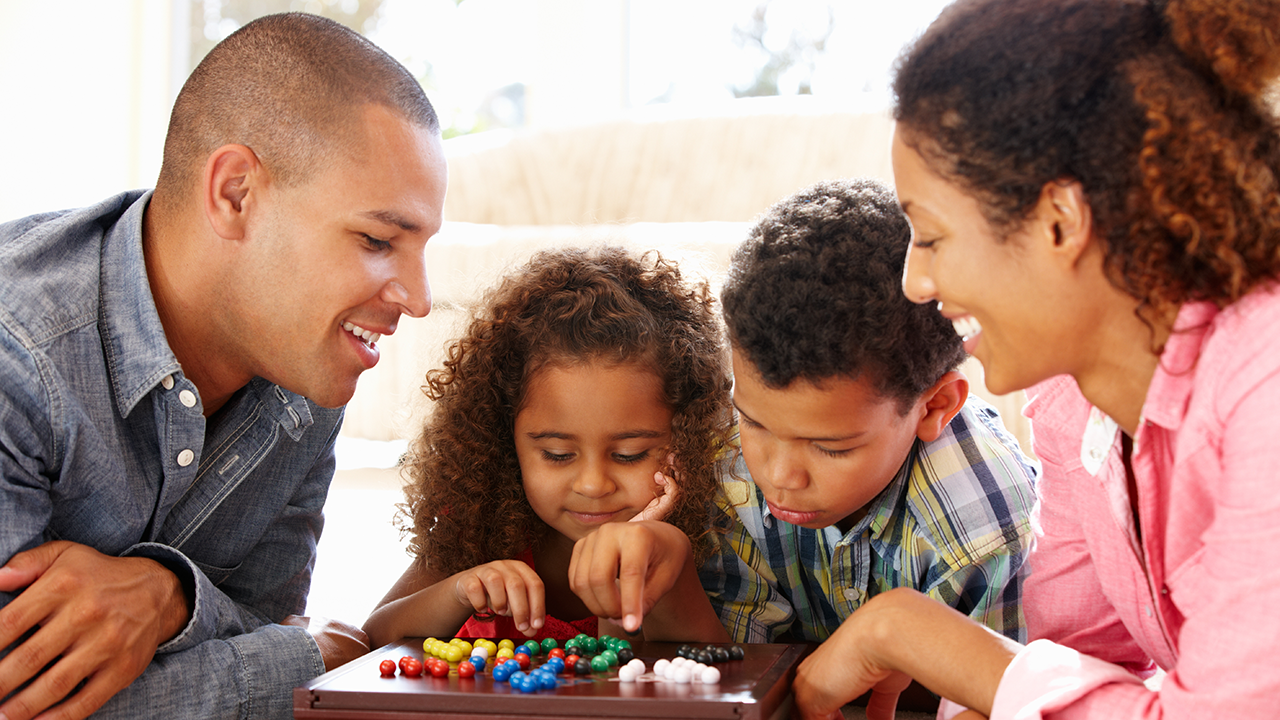 Monopoly. Sorry. The Game of Life. You don’t need to be told about the classic board games that could be fun to play with the whole family. But there’s a lot more available to play during these trying times. We picked some of our favorites that we play with our families...

Voldemort versus a Velociraptor. Rick & Morty competing with the Kool-Aid Man. Batman battling….Betty White (Rose) from The Golden Girls…? What is going on here?! This, in a nutshell, is the expandable Funkoverse board game system in action. Each box comes with a two-sided board and several mini Funko Pop characters. (A couple of the “expansion” characters, like the Kool-Aid Man, do sell separately.) Each character has its own abilities and its own objectives for the game. Who are you going to play as in this incredibly flexible, approachable board game system?

Why compete when you can work together? Mole Rats in Space strands you and up to three friends on a space station that’s infested with….space snakes, of course. You need to work together to collect gear around the station, avoid the snakes, and get to the escape craft.

You’re a knight trying to avoid falling into traps. Slide Quest is a game of maze-navigating balance, that has you complete 20 increasingly difficult levels. The board is pock-marked with holes and supported by four levers. You need to tilt the board to move your knight along his quest, dodging hazards and knocking back bad guys. It’s a game of cooperation and a lot of coordination and, unsurprisingly, it’s a blast.

Bold, plastic explorers hiking up treacherous trails. Fireballs that plummet down slopes, knocking you off course. Rickety bridges, swarms of killer bees, a boulder, snakes...and yes, a leaping tiger that will jump at you. These are the ingredients for an awesome adventure and a truly over-the-top board game. Welcome to Fireball Island: The Curse of Vul-Kar. We can’t recommend this game enough for the whole family. If this description doesn’t convince you, feel free to check out our full SuperParent review.

Your job in Ticket to Ride is to become a robber baron of the railways. Stretch your line across the continent, grab the hubs, and make the most connections -- and do it by strategically claiming routes across the country as you go. While the original versions layer a couple more rules on top, this version is a great board gaming entry for younger players.

This is another great cooperative board game that pits you and your friends against a haunted house. As you might gather from the title, your mission is to sneak in, swipe gems, and escape while keeping pesky poltergeists from overwhelming the mansion. The rules are simple, but tension ratchets up quickly as the house starts getting overrun with spooks.

This diabolical tile-based game has you navigating an ever-changing maze to collect pieces. You insert tiles onto the board that, in turn, alter the available paths to play. The more devious members of your family will try to box you in or kick you off the board. Try not to ground anyone for beating you.

It’s a board game. Of a video game. Rebooted from a board game that came out decades ago. This competitive board game pits one player as the pellet-eating hero against four ghosts out to get him. See how high you can run up the score while staying alive. While this game says that it’s for ages 10 and up, in our experience, the incredibly simple setup is equally great for kids 7 and older.

You and up to three people are on a job -- you’re trying to clear out a vault loaded with $50 million in gold. In order to do it, you need to pay close attention as the game tells you what to do in order to successfully complete the heist. It’s essentially a themed version of Simon Says that speeds up. The only thing that disqualifies this from an all-time great recommendation is the noise. If you’re playing Heist in close quarters, the soundtrack and warning claxons are brutal on the eardrums.

Pokemon Sword and Shield: How to Get the Mark Charm

Build-A-Bear: A New Wonder Woman Bunny Is Here to Save the Day

Lego Will Soon Let You Build Your Own Nintendo Entertainment System