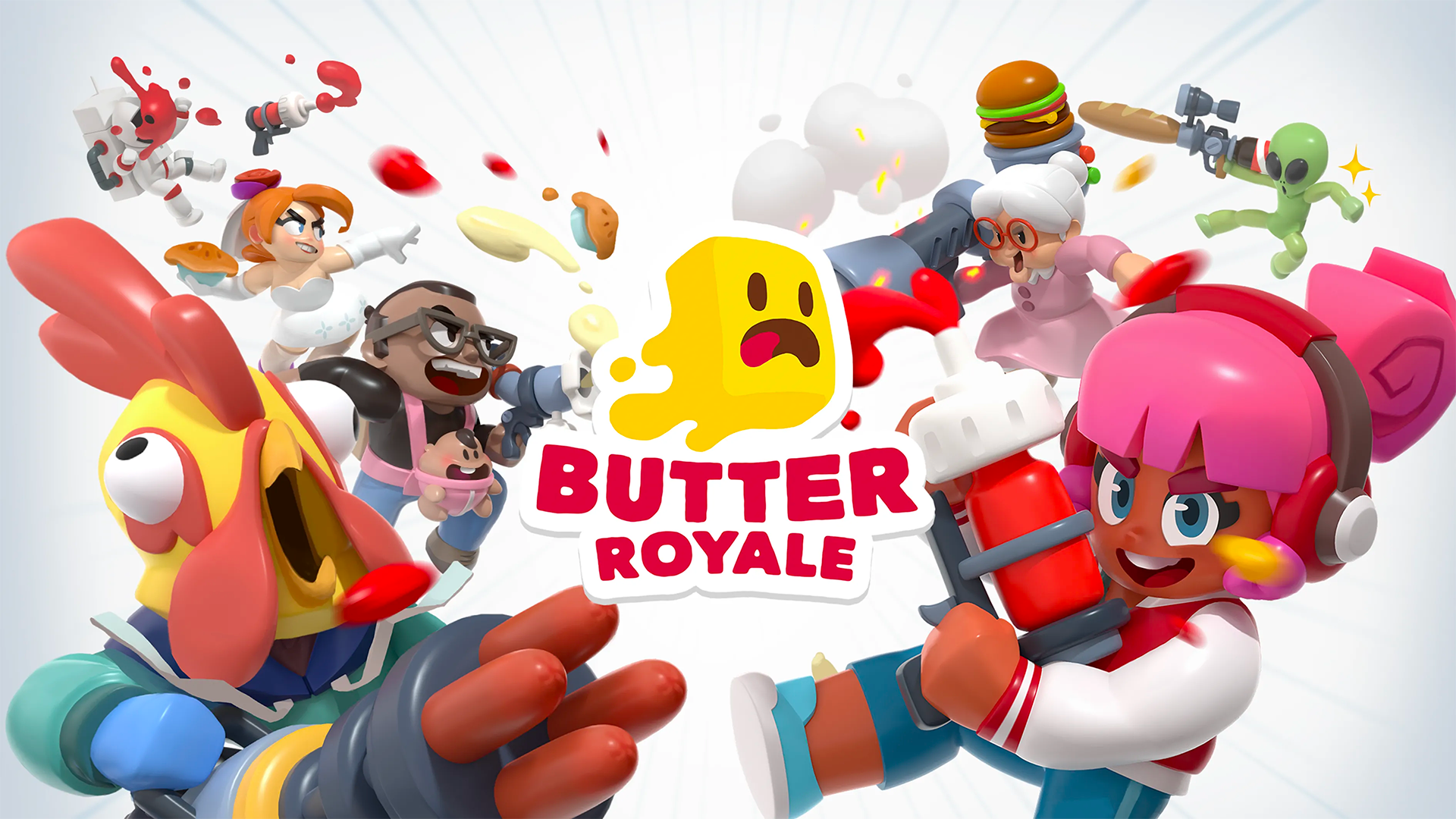 Butter Royale is a Fortnite food fight from developer Mighty Bear Games. It’s a 32-player game built on a desire to make a Battle Royale experience suitable for kids…and built upon a horribly awesome pun. Keep reading for a breakdown of the game, what it does right, and how I finally found a Battle Royale-class video game suitable for action-thirsty five-year-olds.

The premise of Butter Royale: In the near-future, all forms of deadly gear have been banned. But one inventive engineer has figured out a way to weaponize food and create NOMs (Nutritionally Operated Machines, ‘natch). So, when people need to vent their frustrations, they take it to the “Butterfield," a large multi-region map. It’s full of 32 competitors using sausage slingers, French bread launchers, pistoleering ketchup containers, and more. And the whole thing is treated as sport, commentated by the one-and-only, “Caesar Salads.”

What of this, “Butterfield,” you ask? The moving force that pushes players toward the center of the map is a wave of butter that slowly oozes its way along. Stand in the buttery ooze long enough – or get plastered with pastry – and you’re creamed. That’s right, creamed – not dead. Or fainted. So wipe off your face, get up and go again. That’s one of several concessions that make Butter Royale fantastic fun for the family.

Why Apple Arcade & Butter Royale are perfect for kids

There are two very real reasons why both Apple Arcade and Butter Royale are a perfect fit for kids. Here’s something to consider, first: There’s no in-game chat. That is by design. After all, if your kid can’t chat with people on the other end of the Butterfield, they aren’t subjected to some tart toxicity.

Benjamin Chevalier, Mighty Bear’s chief growth officer, explains that, “We have three core pillars that we use to build any title: Being Social - multiplayer; Being Friends / non-toxic; Being fun.”

“We filter toxicity,” he continues. “We have no chat in Butter Royale, for example. And while we are adding emotes, they will be positive ones. It’s about reinforcing positive experiences. Even if you lose, you’re still celebrating something in Butter Royale. You still have confetti, you don’t get killed. It’s non-violent.”

The game is fitted to work great across a variety of Apple platforms thanks to Apple Arcade. On the road? Fire up your iPhone or iPad. On the big screen? Connect a controller to an Apple TV and you’re back in the game. And your account seamlessly carries everything you’ve unlocked across them all.

Then there’s the economics of it. For $5 / month, Apple Arcade provides well over 100 games that you can play -- with no limits -- including the likes of Butter Royale. All without in-app purchases or advertising. None of the potentially sketchy practices that make playing mobile games a minefield for parents. Last thing you need is for your kid to run up a $2K tab on avatar skins or stumble upon an inappropriate ad that gets rolled into the game.

“This game was designed from the ground-up for Arcade,” explains Mighty Bear CEO, Simon Davis. “One of the nicest things about it is that we don’t have to focus at all on monetization. We get to focus on making the most fun game possible without having to spend development time figuring out how to integrate APIs that serve up ads or track traffic.

"As a developer, in a way, it’s a MUCH more straightforward process. It’s been very refreshing for us.”

All of the game's players can expect a number of updates coming to Butter Royale.

Among some of the bigger inbound changes:

Daily quests for online players akin to goals one might find in the likes of Pokemon Go. So you’ll be incentivized to come in every day and see what challenges you can tick off both online and off.

Davis adds that, “Players are very engaged and are coming back every day to get more content. Over time, seasons will change and we will create content to match it. Tied to the time of year. So, for example, Easter is coming so chocolate eggs and fields you can play in are natural fits. Can’t go too far into the secrets now, beyond that though.”

Butter Royale released in January 2020 and Davis couldn’t be more pleased with how the game has been doing on Apple Arcade. However, he admitted, when they first started concepting the game, there were still figuring out where to take it. Until they had an internal chat around random potential names.

Someone jokingly suggested “Butter Royale” and it stuck. A food-based fighting game? That one concept unlocked the Singapore-based team in how they could frame a kid-friendly Battle Royale game, and the pun-laden flood gates opened.

Even I -- this humble writer -- mustard my strength during this interview and relished peppering in a few of my own before unleashing my child on the game. So, without further ado, lettuce begin the review:

My son chose from 52-someodd (emphasis on odd) avatars ranging from judges and astronauts to pirates and police officers with one mission: Be the last one standing.

After a quick-and-dirty tutorial -- and a little coaching from yours truly -- the kid was ready to bring the heat. And by “heat,” I mean “a mayonnaise-based shotgun.” He started off his food fighting career fending off computer-controlled (AI) opponents in the offline mode. Then he turned his sights to solo free-for-all matches online. (Squad-based play is possible, but he wasn’t ready for it at press time.)

He dove in, learning about the different parts of the map. He was loving the commentator (tater?) helping amp up the action as he ran toward delivery zones, hoping to scoop up valuable armor, ammo, and high-powered gear. The simplified controls provide dual stick shooting, and, for kids, just tap a button and your character instantly locks in on the closest competitor. A kind of autofire, making this perfect for people of all skill levels.

His play sessions often become excited shoutcasted matches as the family cheers him on and coaches from the couch on what to do next. Whether he comes in first or fifteenth, he’s doing a mini victory dance and laughing. And having a blast.

Overall, this Hunger Game is really appetizing and my kid can’t wait to dive back in for more. My child is now a vicious force to be reckoned with -- a terror on the butterfield. People fear when he enters the arena. More to the point, I fear that he may now view zucchini in a whole new light: As ammo.

Butter Royale is now available to download for free as part of Apple Arcade. The game has an age rating of 9+.