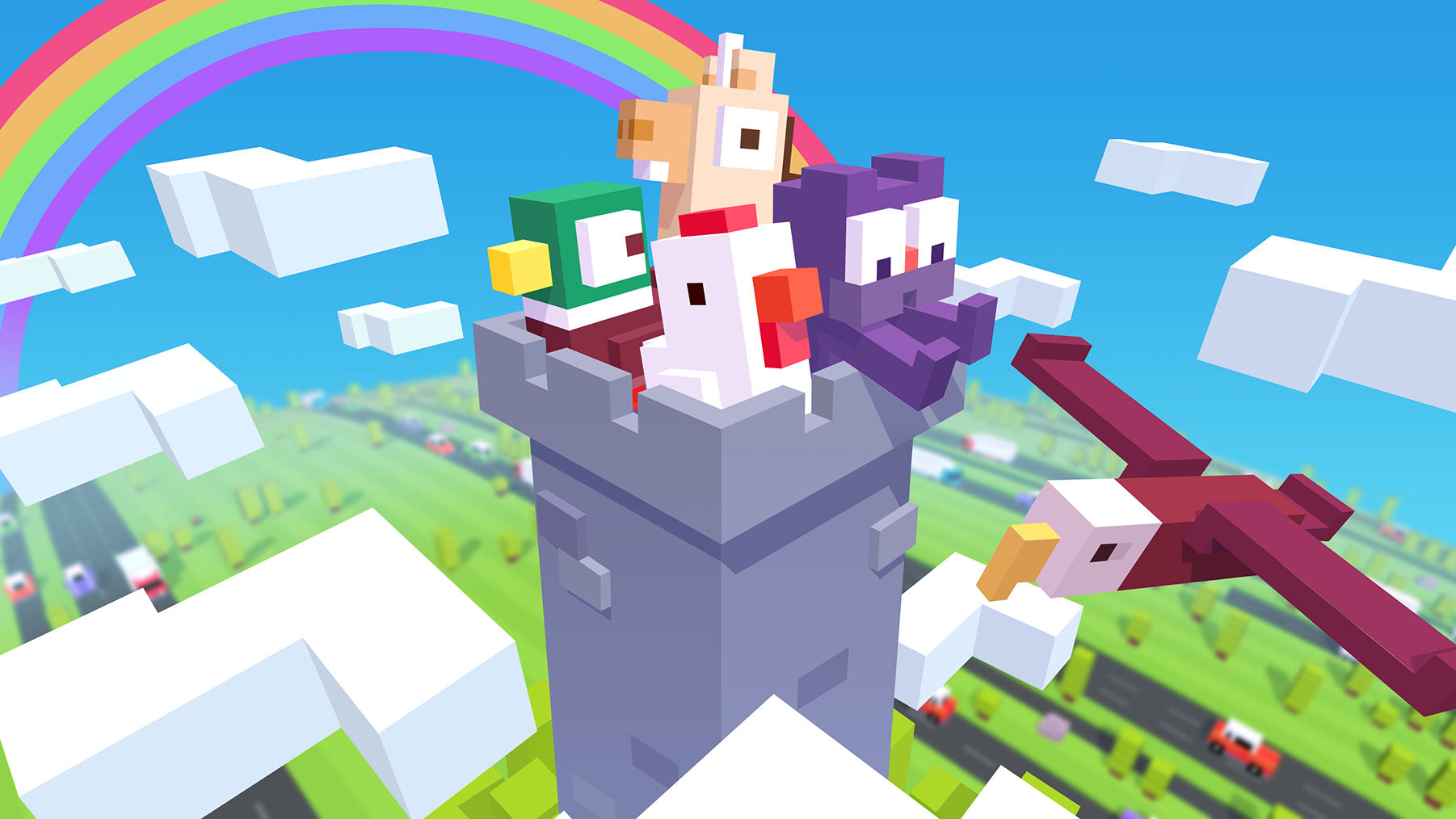 Four relative strangers, huddled together in front of an Apple TV. Shouting. Laughing. Playing Crossy Road Castle on Apple Arcade. That’s the magic behind Hipster Whale games -- they're not only great for kids, but they bring out your inner child as well.

For its new game, Crossy Road Castle, it’s a 1-to-4 player mad dash to make it up a tower. It’s frantic platforming fun, where you all cooperatively work together to complete each room. It has that pick-up-and-play hook that any great classic arcade game has, but as you progress, the challenges get procedurally harder. There are hundreds of rooms to solve before you can topple the tower’s boss: Unihorse. Who farts rainbows. We’ll get to that in a minute.

Ask Hipster Whale’s Clara Reeves and she’ll tell you that, “We always focus on bright, humorous experiences meant to bring people together.” Just look at the team's original game that started it all. Say “Crossy Road” and your kids smile, remembering the first time you handed your phone over so they could play it. Meanwhile, the gameplay triggers the reptile part of your nerd brain’s memories of playing Frogger back in the day. That’s no mistake, according to Reeves.

“A lot of us at Hipster Whale have great memories of going to an arcade and having that social experience of crowding around the machine. And we still do that. It’s really just as important as the experience with the game. We wanted to tap into that and what goes on with the people next to the game, watching it.”

Many members of Hipster Whale’s 11-person staff have kids. That’s had a huge impact on why they do what they do -- and how they do it. “For me,” Reeves tells us, “Having kids makes you think about the world in so many different, new ways. With games….and making games….it became apparent that there weren’t enough for our family that could bring us all together to play.”

She went on to say that, in particular, is a major focus of the studio – “creating games that we can play with our kids.” It’s more than just the gameplay you need to think about -- it’s the IAPs. Fortunately, Hipster Whale has always been great about providing a lot of content and none of it as a wallet-drainer. And when you consider that Crossy Road Castle is part of the Apple Arcade subscription service, you get to focus on the fun. (And they get to focus on creating a whole bunch of extra, fun content.)

I handed the kid the controller for a minute - maybe less - while I went to get a drink. I come back and he already dove in without me and played about three levels into Crossy Road Castle. No explanations required, no serious tutoring needed. Like I said up top, this channels the simplicity of arcade classics that we just instinctively “get” how to control.

Don’t let those playful pixelated graphics fool you, though - the game is fun as hell, but it’s also going to punish you the further you get. There are hundreds of rooms, hand-designed, but procedurally stitched together. Then there is procedural difficulty for each of those rooms depending upon how your group is doing. But so long as one of you survives and gets to the exit, your group continues.

In our session, Team Gladstone makes it as far as level 41 before getting a little cocky. First mistake. We crashed and burned shortly after that. Still, we walked away from the match laughing, not angry, and looking forward to tackling the tower again.

The levels we’ve been playing are in Unihorse’s castle. One of the bosses - the aforementioned rainbow-farter. Hence why a number of the rooms have rainbow motifs and rainbows that act as platforms / elevators. Yes, you are literally riding the updrafts of equine toots to advance.

For launch, the game has the one tower made up of hundreds of different rooms. Beyond that are variants for each. Down the line, there will be more towers, each one themed to different bosses and different mechanics. (Reeves says, “There’s a lot more already underway that’ll be coming shortly.”)

MY KID’S FINAL WORD: He loves the game and working together with me to solve some of the level challenges. He also loved seeing characters that he remembered from the original Crossy Road game back for round two. His favorite part, though: Every time you fail, your character pops like a balloon and makes a fart sound. Hands down the best feature.

Also, Hipster Whale, if you’re seeing this: We’d both love to be able to hit a button to activate an animal sound like the infamous honk from Untitled Goose Game for each of the playable characters.

Crossy Road Castle is now available to download on Apple Arcade. The game has an age rating of 4+.