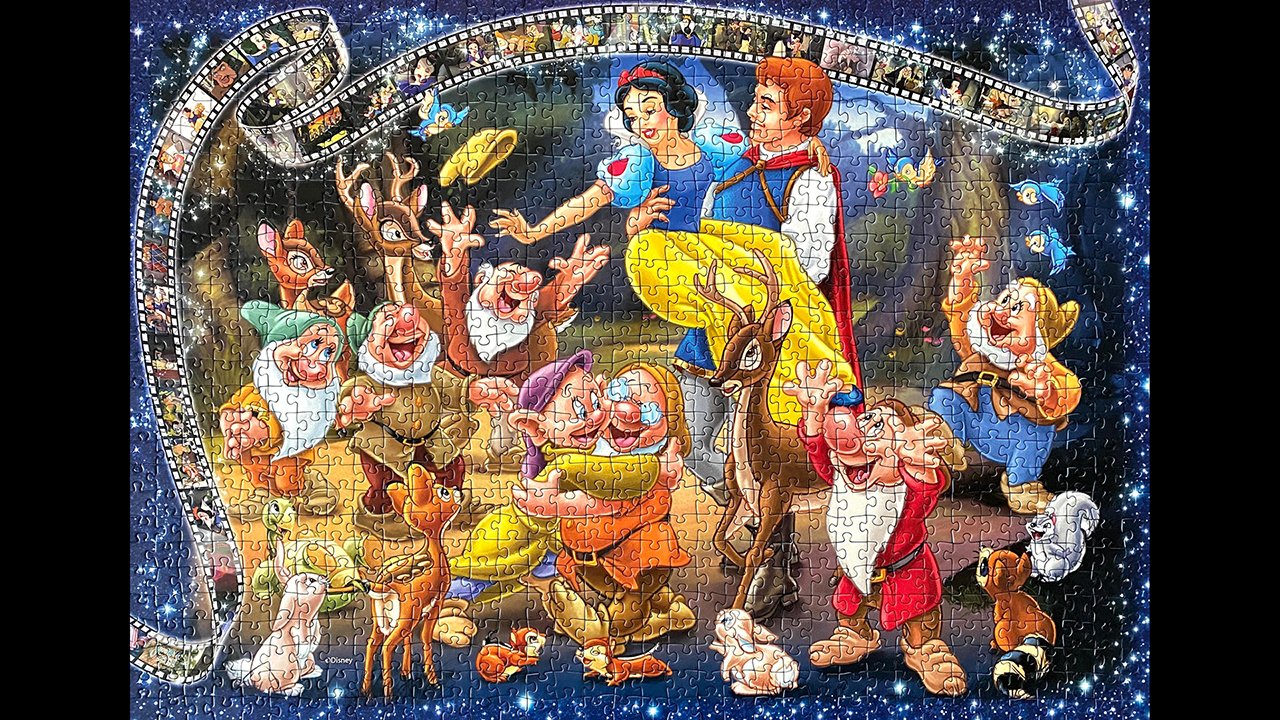 In 2016, puzzle manufacturer Ravensburger released a 40,320-piece jigsaw puzzle containing 10 different sections, with each featuring artwork from a popular Disney animated film, such as Dumbo, Cinderella, and The Little Mermaid.

While each section focused on a different film, the sections all had two similar features: a starry frame and a film strip that’s found along the border on one or two sides of the image. When the 10 sections are connected together, the film strip creates an overall border around the outside of the massive puzzle.

If you're not interested in taking on such a huge task, you can also purchase 1,000-piece versions of each piece of artwork from the larger puzzle.

In the individual puzzles, the main artwork for each image remains the same, but the starry border is slightly different in these smaller versions to account for the fact that the standalone puzzles don’t need to connect to anything else.

Puzzlers in the U.S. can choose from seven different puzzles: Snow White and the Seven Dwarfs, Fantasia, Dumbo, Bambi, Cinderella, Peter Pan, and The Jungle Book. The other three puzzles -- based on The Little Mermaid, The Lion King, and Beauty & The Beast -- are available outside of the U.S. and you can currently buy them on Amazon from a third-party seller.

Each puzzle has an age rating of 14+, and they measure roughly 20” x 27” when they’re fully assembled. As of this writing, each puzzle costs around $20-25 on Amazon.

We had a chance to put together the Snow White puzzle, and we really enjoyed the beautiful artwork throughout. That being said, it was a challenging puzzle, in part due to the starry border that contains so many shades of dark blue.

If you’re looking for a puzzle that will test your family’s puzzling skills, these may be a great option. Even though they have a higher age rating, younger puzzlers can still get in on the fun by searching for pieces with a particular color, or by looking for border pieces that have a straight side.

Disclosure: Ravensburger sent us the Snow White and the Seven Dwarfs puzzle for coverage purposes. Our coverage remains objective.