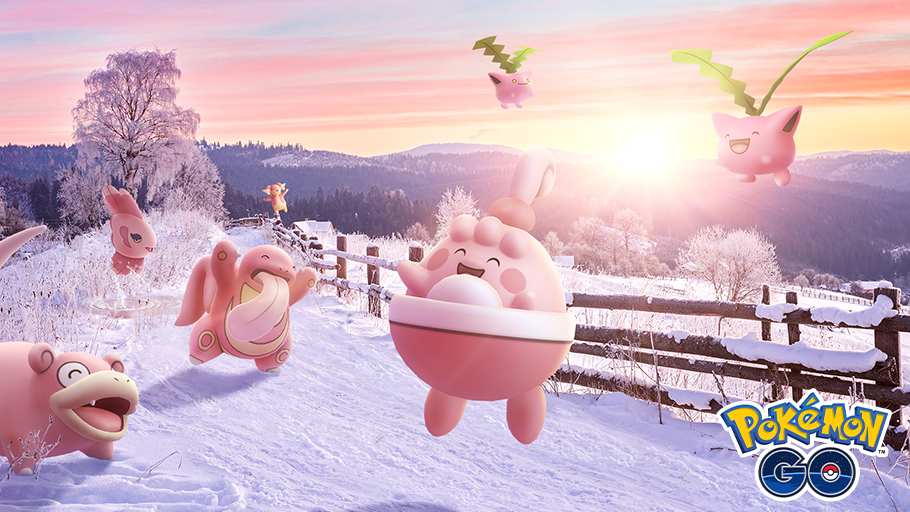 This year’s event runs from February 14 at 8 a.m. to February 17 at 10 p.m. local time. During this time, pink Pokemon will appear more often in the wild, in Raids, in Eggs, and as Field Research encounters. You may also encounter Shiny Chansey in the wild.

“Pink” Pokemon, including Lickitung, Porygon, Cleffa, Igglybuff, Tyrogue, Smoochum, Luvdisc, and Happiny, will be available to hatch from 7 km Eggs during this event, and you’ll have the chance to hatch Shiny Happiny as well.

In addition, if you activate a regular Lure Module during this event, it will remain active for six hours, rather than the standard 30 minutes. You’ll also receive two times the normal amount of Pokemon Candy when capturing Pokemon.

Two new Pokemon -- Audino and Alomomola -- will make their debut in Pokemon Go during this event. The two pocket monsters will appear in the wild and will also be available to hatch from 7 km Eggs. However, in a news post, Niantic, Pokemon Go’s developer, said they’ll be really rare.

Niantic confirmed that Audino and Alomomola will still be available to encounter in Pokemon Go after the Valentine’s Day event ends, but the developer also said they will be “incredibly hard to find.”

Finally, if you want to dress up your in-game avatar to celebrate this event, the game’s Style Shop will be updated with a Luvdisc Top, Ripped Luvdisc Jeans, and Luvdisc Shoes.

In addition to all of these updates, a special Lickitung Raid Day event will take place during the Valentine’s Day celebration. On February 15 from 2 p.m. to 5 p.m. local time, Lickitung that know the move Body Slam will be available to challenge in Tier 4 Raids.

During this three-hour window, you’ll be able to collect up to five free Raid Passes by visiting Gyms. However, you can only hold a single free Raid Pass at a time. That means you’ll need to collect a Raid Pass and then use it to participate in a Raid before you can collect your next free pass.

Are you excited about this year’s Valentine’s Day event in Pokemon Go? Let us know in the comments, or tweet us at @superparenthq.