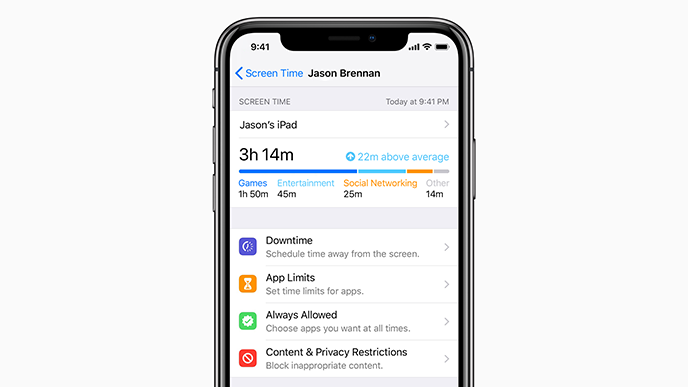 Here’s the latest in video games and tech, from Apple’s new screen-time controls to a cardboard game of Tetris.

Beginning this fall, parents will have new ways to monitor their kids’ screen-time on iPhone and iPad devices. iPhone maker, Apple, revealed a new “Screen Time” feature that will show users detailed information about how they’re using their devices, breaking down the amount of time they spend in each app, each category of app (like “games” or “entertainment” apps), and more.

Parents will be able to turn on limits for kids (or themselves), limiting the amount of time that be spent in a specific app, category of apps, or website. When the time is about to expire, a notification will be displayed on the screen.

The Screen Time feature will also let parents schedule periods of “downtime” on their kids’ devices, when only the apps they specifically choose (as well as phone calls) will be accessible. During downtime periods, app notifications won’t be displayed, and any blocked apps will have a badge showing they’re off limits.

All of these tools are part of iOS 12, the next version of Apple’s mobile operating system, which launches this fall.

Each year, Apple holds an event called the Worldwide Developers Conference (or WWDC, for short), which allows attendees to listen to guest speakers, attend informative and “hands-on” sessions, and more, all focused on developing new experiences for Apple’s products.

As TechCrunch reported, this year more than 350 students are attending the conference through Apple’s scholarship program, which allowed developers as young as 13 to submit applications for consideration. This year’s scholarship winners (the youngest are 16) received free entry into WWDC 2018, as well as free lodging.

Part of the application process required applicants to create “an interactive Swift playground.” Swift is Apple’s programming language. Apple previously released an app called Swift Playgrounds to help students learn the basics of Swift even if they have no previous coding knowledge.

Parents, if you’re kids are interested in becoming app developers, or even attending WWDC in the future, Swift Playgrounds can be downloaded for free on iPad. Here’s a list of some other tools your kids can use to learn to code, and even create their own video games.

A new mobile game called My Child Lebensborn takes players to Norway in the early 1950s, and lets players become the adoptive parent of a “Lebensborn” child born during World War II. According to Wikipedia, Lebensborn was a Nazi program designed to increase the birth rate of “Aryan” children.

As Polygon reported, during World War II, many children were born to Norwegian women and German soldiers. These children were brought into the Lebensborn project for indoctrination, and sent back to Norway after the war.

My Child Lebensborn lets players manage the child’s welfare as they become the victim of bullying by their classmates, teachers, and other adults (they can choose the gender of the parent and the child). The topic is grim, but the game can be used by parents and teens to understand the effects of bullying on a child, and the way parents can react in these uncomfortable situations.

My Child Lebensborn is available to download for $2.99. The game isn’t appropriate for young children, due to its adult themes.

If you’re feeling crafty, try creating this cardboard version of the popular puzzle game Tetris, shared by hello, Wonderful. You can create the game board and shapes by cutting them out of cardboard boxes, and then kids can go to town decorating each piece with markers, construction paper, and more. Basically, let them go nuts.

When the game’s ready, you can hand your kids Tetris blocks one at a time and challenge them to create lines. How fun is that?!